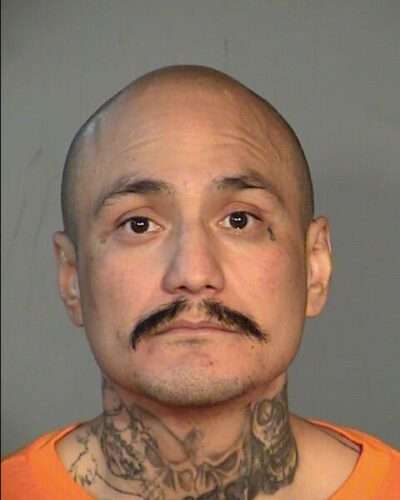 In late December 2000, Hidalgo agreed to kill Michael Cordova in exchange for $1,000 from a gang member. He accepted the offer without knowing Cordova or why the gang wanted him murdered. One morning in January 2001, Hidalgo waited in his car near Cordova’s auto-body shop. When Cordova began unlocking the shop, Hidalgo approached and feigned interest in some repair work. They were joined by Jose Rojas, who occasionally did upholstery work for Cordova and came that morning to retrieve some equipment. After the three men entered the shop, Hidalgo shot Rojas in the back of the head. Hidalgo then shot Cordova in the forehead. Even though the shots were fatal, Hidalgo shot each victim five more times to ensure he died.

¶3 After murdering Cordova and Rojas, Hidalgo went to the home of his godparents, Frank and Barbara Valenzuela. Barbara overheard Hidalgo tell others that he had just murdered two men and wanted to sell his car to Frank because a woman had seen him leave the shop. Frank purchased the car, and a few days later Hidalgo fled Arizona.

¶4 A year later, Barbara informed the Maricopa County Attorney’s Office that Hidalgo murdered Cordova and Rojas. Phoenix Police subsequently interviewed Hidalgo in Idaho, where he had murdered two women in January 2002 and was under federal arrest. Hidalgo confessed to murdering Cordova for $1,000 and to killing Rojas to eliminate an eyewitness.

¶5 Hidalgo pleaded guilty in January 2015 to two counts of first degree murder and one count of first degree burglary. The jury found four aggravating circumstances with respect to the murder of Cordova and three with respect to the murder of Rojas: Hidalgo committed another offense eligible for a sentence of life imprisonment or death under Arizona law; Hidalgo committed prior serious offenses; Hidalgo murdered for pecuniary gain (only with respect to Cordova); and Hidalgo committed multiple homicides. A.R.S. §§ 13-751(F)(1), (F)(2), (F)(5), and (F)(8). Considering these factors and the mitigation evidence, the jury sentenced Hidalgo to death for each murder. The trial court also sentenced Hidalgo to 10.5 years’ imprisonment for the burglary.