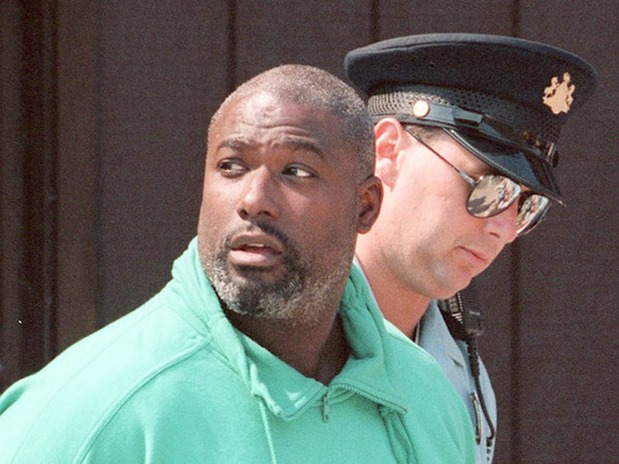 With DNA
evidence, her killer was identified as ex-convict Arthur Bomar, who was
charged with and convicted of her murder. Bomar was on parole in Nevada
for multiple crimes including manslaughter. He had repeatedly violated
his parole but was never returned to Nevada to finish out his sentence.
Because of bureaucratic red tape such as arranging extradition and the
financing of such, Bomar slipped through the proverbial cracks in the
system allowing him to be free. He was finally found out when a year
after the crime another woman was driving alone felt her car being hit
from behind. He tried to get her to stop but she refused and instead
took down his car make and model along with license plate number. The
license plate turned out to be registered to him but the car was not.
The VIN
turned out to be that of Maria Cabuenos, who had been reported missing
since March of that year. The actual car Bomar drove was found at a
junkyard.

The burn pattern found on Aimee’s back was consistent with a
grill on the bottom of the car. Moreover Aimee’s hair was found in the
car. Bomar was sentenced to death for Aimee Willard but never charged in
the Cabuenos disappearance. Her skeletal remains were found after his
conviction and dried blood of hers was found in the trunk. Bomar was tried and convicted for the rape and murder of Aimee Willard and was sentenced to death.
Many theories and suspects were investigated, but all were cleared
when Bomar’s DNA matched DNA found during the investigation. It is
theorized that Bomar hit Willard’s car on purpose to get her to pull
over as he tried with the other woman. He most likely did the same to
Cabuenos. Bomar to this day denies any role in the crimes, claiming he
was a target of racism.

“For the second time, the Supreme Court has upheld the defendant’s conviction and sentence, finding there was overwhelming evidence of his guilt and that he was effectively represented by trial and death penalty counsel,” said Delaware County District Attorney Jack Whelan. “It is time for his sentence to be carried out without any further delay.”

Bomar was sentenced to death in 1998 for the brutal kidnapping, rape and first-degree murder of Willard. Willard had been out with friends at a bar in Wayne, Pa. in June 1996 but never made it home. Her abandoned vehicle was found on the Blue Route, near the Media bypass, with the lights on and a pool of blood by the car. Her naked and battered body was later found face down, in a vacant lot in North Philadelphia. DNA evidence tied Bomar to the crime, along with statements he made to others, including a former girlfriend, his brother-in-law and another inmate.