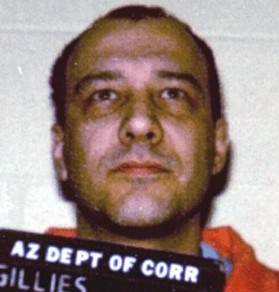 Jess Gillies was executed by the State of Arizona for the murder of a woman in 1981.  According to police reports the victim had locked herself out of her car and Jess Gillies and an accomplice helped her into the car.  The victim then offered to buy them a six pack and give them a ride.  Soon after the two men would force her over to the side of the road and raped her, the men then forced her to bring them to her apartment and raped her again.  The  men stole items from the apartment then brought the victim to a hilltop where she was pushed over the ledge.  When Jess Gillies and his accomplice saw the victim was still alive they crushed her head with a rock