May 3, 2017 Death Row, My Crime Library One Comment
Spread the love 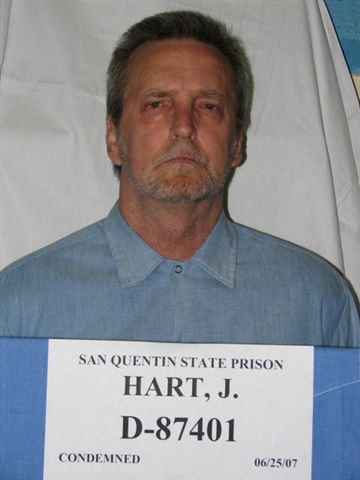 Was
sentenced to death in Riverside County on May 27, 1988 for the March
24, 1986 rape and murder of 15-year-old Diana Lynn Harper. In a 7/11
parking lot, Hart talked to Diana Lynn Harper and her friend Amy R. and
told them that he had found a marijuana patch and needed someone to
watch the road while he harvested the plants. He offered the girls
$1,000 to serve as lookouts. He drove about 40 miles and told Amy R. to
leave at the car and walked away with Diana Lynn Harper.

Later, he came back and asked Amy R. to help her carry the plants. As
they walked into the field she saw her friend lying face-down,
apparently dead. She tried to escape, but Hart caught her and raped her
too. Hart also told Amy that he planned to hit Amy with a rock to render
her unconscious. By misleading defendant into believing that she had
been abused as a child, and promising that she would not contact the
police, Amy persuaded defendant not to knock her out, and eventually he
drove her back to a location near the 7-Eleven store. He gave her a
quarter to phone home, and drove away.