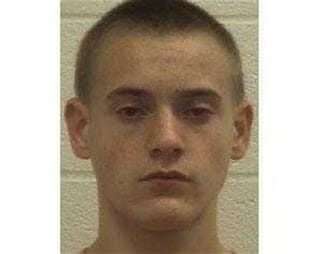 Lacy Aaron Schmidt was fourteen years old when he murdered his fourteen year old ex girlfriend. According to court documents Schmidt planned the murder for several weeks before the crime took place. The night before the murder he stole a gun from the victim’s father.

On the day of the murder Schmidt would walk behind the victim as she looked on her phone and fatally shot her in the back of the head. This teen killer would be sentenced to life in prison without parole

The Georgia Supreme Court has upheld the murder conviction of a Columbia County teenager sentenced to life without parole for murdering his 14 year-old neighbor in Harlem. Schmidt shot and killed Alana Calahan, his friend and one-time girlfriend, at her home in January of 2011.

Prosecutors say Lacy Aaron Schmidt planned the shooting and stole a handgun from Alana’s father days earlier. They say he shot her in the back of the head while the Harlem Middle School student was on Facebook uploading photos, then dragged the body to the woods behind the home to cover up the crime.

Lacy Aaron Schmidt was sentenced to life without parole, five years for possession of a firearm and 10 years for theft to be served consecutive to the life sentence.

Schmidt appealed to the Georgia Supreme Court, arguing Judge Michael Annis did not let jurors know they could chose to find Schmidt guilty of involuntary manslaughter, a less serious charge.Lacy Aaron Schmidt also claimed his trial attorney was ineffective and that his sentence was “cruel and unusual punishment.”

Presiding Justice P. Harris Hines, however, says the high court has rejected all his arguments. He finds the evidence “was sufficient to enable a rational trier of fact to find Lacy Aaron Schmidt guilty beyond a reasonable doubt of the crimes of which he was convicted.”

On January 31, 2011, fourteen-year-old Alana Calahan was fatally shot while in her home in Columbia County. Schmidt, who was then also fourteen years old, lived nearby on the same street and he and Alana were friends. The two were “boyfriend and girlfriend” for a brief time until Alana’s youth pastor advised her that she was too young for such a relationship. Nonetheless, Schmidt spent a lot of time with Alana and her family.

About a week before Alana’s murder, Schmidt entered the Calahan house when no one in the family was home; Alana was the first to arrive home and noticed that the door to the house was unlocked. Alana’s mother asked Schmidt how he got into the house, and Schmidt responded that the door had been left unlocked.

The mother did not believe him and angrily told him that he could not come to the house unless she or her husband was there. Schmidt was also forbidden to come over before 5:00 p. m. on week days. The family kept a shotgun and a handgun in the parents’ master bedroom, and the children were not allowed to enter the bedroom or touch the guns.

On the day of the murder, as Alana’s sister was waiting in the family pickup truck to transport Alana from the school bus drop off location to their house, Schmidt appeared and told the sister that he was not allowed to come over for the next two weeks. After the school bus driver dropped off Alana, the driver saw Schmidt walking nearby; Schmidt had his hands in his pockets and the hood from his jacket was pulled over his head. Immediately after the drop off, Alana was picked up by her sister and taken home.

About twenty or thirty minutes later, the sister left the house to pick up their brother from the bus stop. At that time, Alana was at a computer, which was located beside the house’s sliding back door. During the approximately ten minutes the sister was gone, Schmidt entered the house, shot Alana in the back of the neck, and dragged her to the woods outside the house. Alana died from the gunshot wound to her neck.

The sister returned and saw Schmidt’s shoes inside the house, along with Alana’s shoes; it was common practice for family and friends to take their shoes off upon entering the house. The sister observed that the chair that Alana had been sitting in was knocked over and there was blood, later identified as Alana’s, all over the carpet. Schmidt came into the house through the front door and told the sister that someone had taken Alana and that he did not know what to do. Schmidt then went outside with Alana’s sister and brother, ostensibly to help in the search for Alana.

Schmidt quickly said he spotted Alana, pointed in a certain direction, and led the siblings to Alana’s body. The sister did not believe that Schmidt could have seen the body from his initial vantage point. Schmidt approached Alana’s body, and tried to pull a stick out of her hair; he then “started freaking out saying, oh, my [G]od, now my prints are on her and they’re going to think I killed her.” Schmidt did not cry upon seeing the body. The sister unsuccessfully attempted to revive Alana, and called police.

The police arrived to find Alana’s sister and brother crying and screaming, but Schmidt displayed absolutely no emotion; indeed, Schmidt acted as if “there was [not] a care in the world.” During police interviews, Schmidt exhibited conduct which raised suspicion, including attempts to cry which appeared to be disingenuous. After telling the police at least five different stories about what transpired, Schmidt admitted to having taken Alana’s father’s handgun from the master bedroom, and allegedly accidentally shooting Alana with it as he stood behind her attempting to unload it.

However, it was later determined that in the position of the handgun mechanism as described by Schmidt, 13 pounds of pressure would have to be applied to the trigger in order to fire the handgun. Investigators later searched Schmidt’s residence and found a gun box, ammunition, and an owner’s manual for the murder weapon. The police determined that it was not possible for Schmidt to have brought the gun box to his home during the brief interval in which Alana was shot, and that he would have had to obtain it beforehand.

In Schmidt’s book bag, stashed in his bedroom closet, police found other items belonging to the Calahan family, including an iPod, RCA MP3 player, and a digital camera. Alana’s house keys were thought to be lost prior to her death, but were found several weeks later under mats on the floor of the Calahan family’s pickup, to which Schmidt had access.

The Georgia Supreme Court has upheld the murder conviction and life prison sentence for a 14-year-old boy who shot and killed a 14-year-old girl in the east Georgia town of Harlem.

Authorities said the boy, Lacy Aaron Schmidt, went to his friend Alana Calahan’s house and shot her in the back of the neck in January 2011. They say he then dragged her into nearby woods, where she died from the gunshot wound, and later tried to make it appear that someone had abducted her.

Schmidt appealed his conviction to the Georgia Supreme Court, saying a judge and his lawyer had made legal mistakes, and that his sentence amounted to cruel and unusual punishment.

The court said Monday that his arguments were rejected, and his conviction and sentence were upheld.