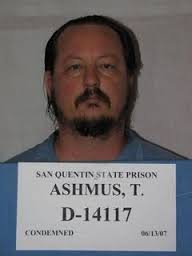 Troy Ashmus, a 22-year-old carnival worker at the time of the crime on May
19, 1984, was convicted in the murder of seven-year-old Marcella Davis
after attacking her at Santa Anita Park, brutally raping her and then
stuffing two wadded up plastic bags down her throat. He lured her from
the pond at Howe Avenue Park by offering to give her a baby duck.
Earlier that day, he had attacked a jogger and dragged her into some
bushes before fleeing when two men happened upon the scene. His trial
was moved to San Mateo County.

About 4 o’clock on the afternoon of Saturday, May 19, 1984, Marcella (Marcie) D., who was seven years of age, rode to Howe Park in Sacramento on her bicycle. There she met her brother Arby, age 10, who was responsible for her, and Arby’s friend Ernesto (P.J.) G., age 9. Arby and P.J. walked to a pond to fish from a dock, and Marcie went to play with some children within a few feet of the boys.

Defendant, who was 22 years old, approached Arby and P.J. as they were fishing. For the past few days he had been camping in an area in adjacent Santa Anita Park called Stoner’s Pit, a site that was filled with litter but also [54 Cal.3d 953] secluded and covered with vegetation. He gave the boys advice and help in their fishing, and stayed nearby.

About 5 or 5:30 p.m., Arby and P.J. walked to the park clubhouse. Marcie soon rode up. She said that she was going off to Santa Anita Park with defendant: he had told her that he knew of a duck’s nest there, and that he would give her a duckling if any had hatched. The boys said that she should return in about an hour.

Defendant and Marcie proceeded to Stoner’s Pit. Once there, he subjected her to a fatal attack. He raped her and perhaps also penetrated her with some foreign object, making a very large tear through the length of her vagina to within a quarter of an inch of her rectum. He sodomized her, inflicting two small wounds in the anal or rectal tissue. He possibly committed oral copulation by inserting his penis into her mouth. He evidently ejaculated over her body. He stuffed into her mouth and throat material including two plastic bags, a piece of cellophane about six inches long and two to three inches wide, and a pair of red shorts she had been wearing; the bags were wedged side-by-side in separate tight wads deep in her throat with the cellophane in between; the shorts were tightly compressed within her mouth; the bags obstructed her throat and caused her to die by asphyxiation. Covering her naked body with a carpet remnant he had used for a sleeping mat during his stay at Stoner’s Pit, he fled the scene.

When Marcie did not return as she had been told, Arby and P.J. became concerned. They searched without success. Arby telephoned his father. He too searched without success. The police were called in. About 8:30 p.m., a neighborhood man who was assisting the officers found Marcie’s body. Within a few hours, defendant was arrested. He had fresh abrasions on at least one of his hands. It does not appear that the duck’s nest of which defendant spoke had ever existed.

Although most of the basic facts were essentially undisputed, one was strongly contested: intent to kill. The People sought to prove intent by evidence including the manner and means defendant used to kill Marcie. By contrast, defendant, who took the stand himself, expressly denied intent. In his testimony, he generally confessed his culpability, admitting that he had lied in extrajudicial statements to the police and others in which he attempted to avoid responsibility and even tried to shift blame to his brother Tracy, who was three years younger. All the same, he asserted that Marcie’s death was accidental.

Beyond the basic facts set out above, the People and defendant disputed the proper characterization of the events. [54 Cal.3d 954]

The People attempted to prove that defendant was especially cruel and his attack singularly brutal. They relied largely on the established circumstances of the offenses.

For his part, defendant tried to show the opposite. For example, he testified to the following effect: he had consumed marijuana on the day in question; not long after reaching Stoner’s Pit with Marcie, “something right then and there hit me”; he asked her to take her clothes off, and she complied; he then took off his own; his intention was “[j]ust to make her happy”; at first, she did not resist “because all I was doing was I was like a man would regularly treat a woman”; during what he called “the process of making love to her,” he did “nothing that would be harmful”; “Let’s put it this way,” he continued, “when I make love to a woman-one of my girlfriends-she don’t have no complaints at all”; soon, however, Marcie’s eyes began to flow with tears and she cried for help; “[a]bout two seconds later someone walked by and yelled out, ‘Did someone holler for help?’ “; he then pushed the plastic bags into her mouth, but only “to keep her quiet”; after the act, he cleaned himself off and dressed; “I believe she was still moving when I finally left”; he did not remove the bags from her mouth because “I forgot they were there”; he covered her with the carpet remnant “out of courtesy”; he felt remorse and shame, apparently from the very moment he did the deed; and he stated that he preferred to refer to Marcie as a “person” because “I’m tired of people using the word ‘child.’ ”