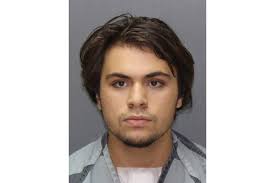 Andrew Zaragoza was sixteen years old when he murdered his mother. According to court documents police were called to the Zaragoza residence in Bel Air Maryland where they found the body of a woman and a teenager barricaded in a bedroom. Andrew Zaragoza would slide a bloody knife under the door and told police that his mother took pills that day, hit him so he killer her.

Autopsy would show his mother had died from being beaten by a hammer and stabbed multiple times. Andrew Zaragoza was suffering from self inflicted stab wounds and told officers that he had drunk bleach in order to take his own life. This teen killer would be sentenced to twenty six years in prison with half of the sentence to be suspended.

A teenager that a Harford County jury convicted in January for the 2017 murder of his mother in their Bel Air home, could spend at least 13 years in prison after Circuit Court Judge Yolanda Curtin handed down his sentence Monday afternoon.

Andrew Phillip Zaragoza, now 18 years old, was 16 when he was arrested and charged with beating his mother with a hammer and stabbing her to death in their townhouse in the 1000 block of Jeanett Way just north of the Town of Bel Air.

Harford County Sheriff’s Office deputies found 56-year-old Donna Zaragoza dead in a second-floor bedroom after they responded to the house following a 911 call around 6:40 a.m. on July 20, 2017. Andrew Zaragoza, then a student at C. Milton Wright High School, had barricaded himself in another bedroom. Deputies convinced him to come out, and he was taken to Johns Hopkins Bayview Medical Center in Baltimore for treatment of stab wounds police determined were self-inflicted.

A jury found him guilty in late January 2019 of second-degree murder and two counts of wearing and carrying a dangerous weapon with intent to injure.

Judge Curtin sentenced Zaragoza Monday to 30 years in prison, with 15 years suspended, for the murder charge, and three years each on the two weapons charges — the time on the lesser charges will be served concurrently, according to Curtin. The judge also gave Zaragoza credit for the one year, 11 months and 19 days he has served in the county jail.

“At this time, the court finds that this is the most appropriate sentence,” Curtin said.

The judge noted Zaragoza’s mother “died a very violent death, in her own home, at the hands of her son,” but she also acknowledged the physical and sexual abuse Zaragoza suffered at the hands of his mother as well as his father, who died of a drug overdose in 2016. The youth’s defense attorneys brought up the abuse, as well as his parents’ history of drug addiction, during his trial and again at his sentencing hearing Monday as mitigating factors.

Curtin said she respects the jury’s verdict but noted that she has “no doubt” it was a challenge for them to come to their conclusion. The judge, who has been on the bench since November of 2013, said she gave to Zaragoza what was “perhaps the most challenging sentence” of her time as a jurist.

“Words can’t express how sorry I am,” Andrew Zaragoza said as he read a written statement, standing with his public defenders, Timothy Bahr and Kimberlee Watts, on either side. Zaragoza wore a black and white-striped jail uniform, with his dark hair cut short and sporting a full beard.

He expressed remorse for his mother’s death, saying July 20, 2017 will “go down as one of the worst days, if not the worst” in his life.

“I just wish I could take that day back,” Zaragoza said.

He said he has made progress while in jail, through treatment from his therapist, Danni Davis, in dealing with his past childhood abuse and finding the ability to talk about the sexual abuse he suffered.

Davis testified on behalf of the defense Monday, along with Dr. James Fleming, who is retired after working for 20 years in the state’s Department of Corrections and at the Patuxent Institution’s Youth Program.

Bahr and Watts recommended Curtin sentence Zaragoza to a short prison term or to the Patuxent Institution, where he could receive mental health treatment. Fleming testified that the defendant would have “virtually no treatment option” in the state prison system

Andrew Zaragoza begged for mercy from the judge but said he would accept the sentence she handed down. He pledged to earn his GED, plus work as an advocate for other children who have been abused and to stop drug abuse.

Assistant State’s Attorney Mark Meehan asked Curtin to sentence Andrew Zaragoza to 30 years in prison with about six years suspended. He acknowledged the abuse the defendant had experienced and his mother’s addiction issues, but stressed Zaragoza had been convicted of “a serious, serious offense.”

“No one deserves what happened to her in this case,” Meehan said of Zaragoza’s mother.