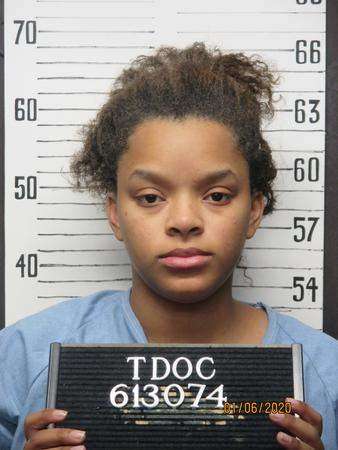 Angel Bumpass was thirteen years old when she participated in a murder that left a man dead. According to court documents the victim, a sixty eight year old man Franklin Bonner was tied up and beaten to death. The crime went unsolved for a decade. Angel Bumpass who was a five foot eighty pound eighth grade student at the time of the crime would ultimately be convicted of the murder as her fingerprint was found on the tape that bound the victim. Mallory Vaughn who confessed to a cellmate that he murdered Franklin Bonner and would later state never knew Angel Bumpass was found not guilty of the murder. Angel Bumpass the alleged teen killer would be sentenced to serve sixty years in prison

A Criminal Court jury on Thursday night ruled Angel Bumpass guilty of a murder that happened in 2009 when she was 13 years old.

The verdict in the Cold Case for her was guilty of first-degree felony murder and guilty of attempt to commit especially aggravated robbery.

Her arrest came after a new detective on the case decided to have the fingerprints once again checked from duct tape that was used to tie up the victim. Two of the prints came back to Angel Bumpass.

The jury found that Mallory Vaughn was not guilty, though Federal inmate Nicholas Cheatom told the jury that Vaughn had confessed to him that he killed 68-year-old Franklin Bonner.

Cheatom said Vaughn told him he was going to “put a lick on someone named the lottery man.” Cheatom, who was in federal prison when he initially told investigators this information, said he had picked up Vaughn from a hotel when the defendant allegedly spoke about the murder.

“He told me he messed up,” said Cheatom,“ (he said) he duct-taped someone up like a mummy, and it went wrong.” The witness told the court Vaughn would occasionally cut his grass or do chores around his house for some extra money.

Defense attorney Kevin Loper grilled the witness, focusing on the way Cheatom’s story changed from one interview to the next. At one point, Cheatom said he did not know about the murder until investigator Karl Fields told him about it. Another time, the witness said he learned about the murder from the television news the next day. And up until a later interview, a female accomplice was not mentioned by the witness.

The defense also pointed out that the testimony he gave would lessen Cheatom’s sentence in Federal Court. He is currently serving a sentence for a bank robbery.  Cheatom accused the defense of omitting several key statements, and at times even going as far as to say the defense was making up things.

“Are you calling me a liar?” asked attorney Loper.

One point of contention occurred when attorney Loper repeatedly asked Cheatom about whether or not he knew someone named Bumpass. Cheatom said he did, and attorney Loper said the transcript showed that in an earlier interview, he said he did not. As the prosecuting attorney pointed out, in the transcript, Cheatom was answering the question of whether or not he had a relative named Bumpass.

After the state rested its case, both Vaughn and Ms. Bumpass declined to testify. TBI agent Jennifer Shipman said the organization did not test a hair follicle found on the tape. The defense attorney argued it may have belonged to someone other than Angel Bumpass, and possibly to someone not identified who had fingerprints on the tape as well. In Wednesday’s testimony, it came to light that there were nine unidentified fingerprints on the tape aside from just Angel Bumpass’.

Her grandfather said Ms. Bumpass was a very creative child, and enjoyed arts and crafts. He said she would use duct tape in certain crafts, and that he would then bring his tools and equipment to Franklin Bonner’s house when he would work on things at that residence. The grandfather said he did not recall his granddaughter ever going over to Mr. Bonner’s house though.

A private investigator produced documents showing Ms. Bumpass had been counted present at school on that day. However, she was only in school until early afternoon, and he could not verify how reliable those documents were.

After a lunch break and a lengthy set of jury instructions, the defense and prosecution gave their closing arguments.

Prosecutor Cameron Williams focused on the evidence found at the scene, especially Angel Bumpass’ fingerprints. He also asked the jury to consider Cheatom’s testimony, saying that it was logical that a criminal such as Vaughn would confide in a fellow criminal like Cheatom.

“There is no justification for what these two individuals did to Franklin Bonner. They tied him up in his kitchen, cut off his air supply, and let him suffocate,” said prosecutor Williams, “You have an awesome opportunity to make sure there is closure for the Bonner family.”

Vaughn’s attorney, Loper, refuted this assertion, and questioned the credibility of the prosecution’s star witness. At one point, a very emotional Loper pled with the jury to consider the facts of the case and find his client innocent of murder.

“This case is about lies, assumptions, and a blatant disregard for the facts,” he said. “I don’t know why they would put an innocent man in prison for life.”

Bumpass’ attorney, Andrea Hayduk, had a similar message for the jury. She focused on the complete absence of evidence of Ms. Bumpass and Vaughn ever knowing each other. No phone calls, texts, emails, or pictures were found that could link the two. Attorney Hayduck also repeatedly reminded the jury of Ms. Bumpass’ age. At the time of the 2009 slaying, Angel Bumpass was only 13 years old.

“Convicting a 13-year-old girl of murder is not perpetuating the wheels of justice,” said the attorney, while also saying that a female accomplice, not even specified to be Ms. Bumpass, was not mentioned by Cheatom until years after the fact.