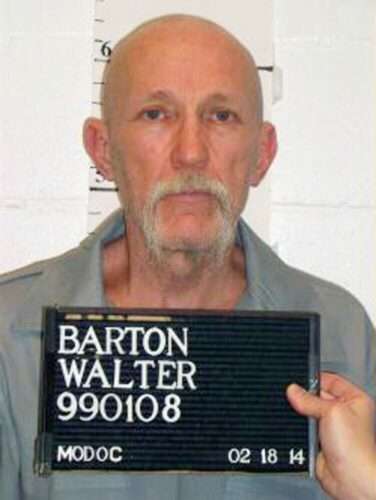 Missouri on Tuesday executed Walter Barton for the killing of an elderly woman in 1991, despite mounting calls to investigate his claim of innocence.

Barton, 64, died by injection at the prison in Bonne Terre, Missouri, making him the first person executed in the U.S. since the coronavirus outbreak was declared a pandemic.

In his final statement released prior to his execution, Barton said: “I, Walter ‘Arkie’ Barton, am innocent and they are executing an innocent man!!”

Barton breathed heavily five times after the lethal drug entered his body, then suddenly stopped. He was pronounced dead at 6:10 p.m., according to the Missouri Department of Corrections.

The U.S. Supreme Court denied Barton’s application for a stay of execution about two hours earlier.

Barton was convicted of first-degree murder in the Oct. 9, 1991, killing of 81-year-old Gladys Kuehler. She had been sexually assaulted, slit across the throat and stabbed more than 50 times at a mobile home park she managed in Ozark, south of Springfield.

From 1993 to 2006, Barton was tried five times for the killing, a rarity in death penalty cases. His trials featured blood spatter evidence and an incentivized jailhouse witness.

Several groups, including the American Bar Association, called on Republican Gov. Mike Parson to stop the execution. Another, the Innocence Project, urged him to commission a board of inquiry to examine Barton’s conviction and sentence.

“Walter Barton’s conviction relies solely upon two of the known leading causes of wrongful convictions — testimony from a jailhouse informant and flawed forensic science, in this case faulty blood pattern analysis,” Vanessa Potkin, the legal organization’s director of post-conviction litigation, said in a statement before the execution. “There is simply no reliable evidence left to sustain his conviction.”

Parson said Monday he had not heard anything to make him reconsider the execution, which he said would “move forward as scheduled.” A federal appeals court Sunday overturned a 30-day stay of execution granted by a judge two days earlier.

“Today’s execution is a dark and tragic reminder that Missouri’s criminal justice system is unabashedly flawed and rife with misplaced priorities,” Sara Baker, legislative and policy director for the ACLU of Missouri, said in a statement.

A frequent visitor to the mobile home park, Barton was with Kuehler’s granddaughter and a neighbor when they found her dead in her blood-soaked bedroom.

When officers questioned Barton, they noticed small bloodstains on his clothing. He told police he must have gotten the victim’s blood on him when he pulled Kuehler’s granddaughter away from the body and slipped.

While prosecutors presented other evidence as part of their case, three of the 12 Cass County jurors who voted to convict Barton say the strongest evidence against him came from a bloodstain-pattern analyst, who opined that bloodstains found on Barton’s clothing were the result of impact spatter ejected by injuries to the victim.

Since April, the three jurors said findings by another crime scene analyst that contradict the state’s expert would have influenced their consideration of Barton’s guilt. One wrote on his affidavit it would have made him “uncomfortable” recommending the death penalty.

A fourth juror has since come forward with similar concerns, one of Barton’s attorneys, Frederick Duchardt Jr., told The Star.

The other crime scene analyst, Lawrence Renner, was retained by Barton’s attorneys in 2015. He opined the bloodstains on Barton’s clothes were transfer stains, meaning they got on Barton’s shirt when it touched existing bloodstains. His conclusions supported Barton’s version of events, which the three jurors indicated was “compelling.”

Renner also determined that whoever killed Kuehler could not have been wearing Barton’s clothes because they would have been covered in blood.

Other evidence presented by prosecutors included testimony that Barton answered the victim’s telephone that afternoon and that his mood changed after the time of the killing. A check Kuehler wrote to Barton was also found in a ditch days later.

The jailhouse informant, Katherine Allen, testified Barton told her he would kill her “like he killed that old lady.”

Barton’s attorneys argued she was unreliable, noting she had 29 prior convictions on her record, including for dishonest crimes such as forgery. She also had criminal charges dropped in exchange for her testimony, they said.

Since then, she has defrauded financial institutions and people under the name Catherine Demaree, Barton’s lawyers said. Federal prosecutors in Indiana have called her a “life-long perpetrator of fraud and identity theft schemes.”

The first attempt to prosecute Barton ended in a mistrial in 1993 after his attorney objected that prosecutors failed to endorse any trial witnesses. Another mistrial was declared that same year after another jury deadlocked over his guilt.

Barton was convicted in 1994 and sentenced to death. The state Supreme Court overturned the conviction over objections to the prosecutor’s final arguments.

In 1998, Barton was convicted again and sentenced to death, but another new trial was ordered when a judge found that the prosecution had failed to disclose the full background of the jailhouse informant, among other improprieties.

Before the fifth trial, which was moved to Cass County, four potential jurors said they found it “difficult to believe” Barton was innocent because prosecutors had spent so many years trying him, records show.

Reached Monday, Ron Cleek, who assisted the Missouri Attorney General’s Office in Barton’s fifth trial as the Christian County prosecutor, said he strongly believed in Barton’s guilt. He said one of the victim’s relatives was “ecstatic” about the execution.

When the state Supreme Court affirmed Barton’s conviction and sentence in a 4 to 3 decision, the majority called the evidence of Barton’s guilt more than sufficient, saying evidence placed Barton at Kuehler’s home at the time of the killing.

But the dissenters said the only physical evidence tying him to the scene was the bloodstain, calling it “highly suspect at best.”

Barton’s trials had been plagued by prosecutorial misconduct, Judge Michael Wolff wrote in the dissenting opinion. There was a trail, he wrote, of “mishaps and misdeeds that, taken together, reflect poorly on the criminal justice system.”

In an editorial this week in the St. Louis Post-Dispatch, Wolff recalled how he and his two former colleagues who joined his dissent had “grave concerns” about if the state’s evidence was enough to convict Barton, nonetheless to put him to death.

“If only we were sure that he did it,” Wolff wrote.

“How can anyone in good conscience support this continued policy of not only state-sanctioned, but state PERFORMED, killing — within an utterly broken ‘justice’ system?” he wrote.

As they called on Parson to halt the execution, the Innocence Project, the Midwest Innocence Project and the MacArthur Justice Center said Barton’s first four trials were prosecuted by an assistant attorney general who was a “serial offender with a history of obtaining death sentences only to have them reversed due to prosecutorial misconduct.”

The special prosecution unit he worked in wrongly convicted at least four men of murder, the nonprofit said.

In a news release, the Innocence Project noted about 45% of all DNA exonerations in the U.S. involved the misapplication of a forensic science, such as blood spatter. It also said jailhouse testimony was the leading cause of wrongful conviction in capital cases.

Barton was the first person executed in the U.S. since Nathaniel Woods was put to death in Alabama on March 5.

Strict protocols were in place to protect workers and visitors from exposure to the coronavirus, according to the Missouri Department of Corrections.

Everyone entering the prison had their temperatures checked. Face coverings were required, and the prison provided masks for those who didn’t have them.

But several employees clocking in and out for the day, without masks, came into the same room used by media prior to and after the execution. They remained more than 6 feet away from the lone reporter there at the time.

Witnesses were divided into three rooms. Those witnesses included state witnesses and people there to support Barton. No relatives or other supporters of the victim attended.

As of Tuesday, 1,518 people have been executed in the U.S. since 1976. Barton was the 90th person executed since then in Missouri.

Of those, some inmates have asked their victim’s loved ones or a religious spirit for forgiveness as part of their final statements. Barton and eight others in Missouri proclaimed their innocence, according to a review of state records.

Other states, including Ohio, Tennessee and Texas, have postponed executions after attorneys argued that pandemic-related closures prevented them from securing records or conducting interviews for clemency petitions and court appeals.