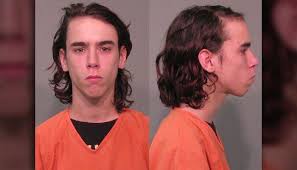 Jacob Matt Morgan who is mostly referred to as Matt Morgan was seventeen years old when he set his home on fire in South Carolina killing his fourteen month old brother. According to court documents Matt Morgan would set at least two fires inside of the trailer home and then leave the residence. Authorities would charge him with murder after he wilfully leave his fourteen month old brother in the burning residence. His parents told authorities that Matt Morgan suffers from a number of mental health issues including being on the autism spectrum. Regardless this teen killer would be sentenced to fifteen years in prison

A York County teen accused in the death of his 14-month-old half-brother pleaded guilty to involuntary manslaughter and unlawful conduct of a child in court Tuesday.

Jacob Matthew Morgan, 17, will spend 15 years in the Department of Corrections

Morgan, known to friends as Matt, was arrested last year after a fire at his Rock Hill mobile home killed his baby half-brother, Joshua Hill, in March.

Morgan pleaded guilty to involuntary manslaughter instead of murder, and an unlawful conduct towards a child charge, rather than homicide by child abuse.

The teenager also entered an Alford plea, maintaining his innocence, for third-degree arson rather than first-degree arson.

“It my estimation both fires were set at or near potential heat sources – both of them near heaters – to disguise the fire as being accidental,” said SLED investigator William Keller.

In court Tuesday, an emotional Morgan told the judge that he loved his brother and wished he could have saved him.

“To kill him would be killing a piece of myself,” Morgan said.

Prosecutors told the judge the fire had two points of origin the bedroom where Hill was asleep and the living room. Morgan was accused of lighting tea candles before the trailer home went up in flames.

Deputy solicitor Willy Thompson said the teen had a fascination with fire, and that evidence pointed to the flames being intentionally set.

“Whether he certainly intended to kill his brother or not, it may be up for some debate,” Thompson said, “But he obviously set the fire that ultimately killed his brother.”

Prosecutors said Morgan had a cell phone, but never used it to call for help.

Despite the evidence against the older brother, loved ones continue to stand behind him.

A first-degree arson charge carries a mandatory minimum sentence of 30 years in jail. After consulting with his public defender, Morgan opted to enter the Alford plea, admitting the state had enough evidence to convict him.

“We have always believed in his innocence, because we know our son. We know the evidence against him looks horrible,” said Morgan’s mother Julie in court.

Prosecutors said they’re pleased with the deal, and the amount of time Morgan will serve behind bars.

Deputy solicitor Thompson said it was challenging because the victim’s family and suspect’s family were one and the same, and did not want prosecution.

“The friends and neighbors of the family, they were very adamant in us not prosecuting him at all. But that was not an option, because this obviously was a crime,” Thompson said.

“We’re as set as we can be… the pain will never go away, but hopefully it will lessen in time,” Myke Hill said.

Morgan will be on five years of probation after his release, but could be sent back to jail for 15 years if he violates any of the terms.

Jacob Matt Morgan is scheduled to be released in 2022

The half-brother of a 14-month-old boy killed last week in a Lesslie-area mobile home fire has been charged with murder and arson after an investigation uncovered that the 17-year-old intentionally set fire to the home while the child was sleeping, authorities said.

The arrest comes just days after the fire that killed Joshua Hill on Friday morning in a mobile home park off Catawba Church Road near Lesslie.

He is accused of setting a fire that officials say fully engulfed a home in the Apple Valley Mobile Home Park around 8:30 a.m. Friday. The home was destroyed and fire personnel have said they could not get inside in time to save the child.

In South Carolina, a murder conviction carries a mandatory minimum of 30 years in prison and up to life without parole. However, Morgan’s young age saves him a potential death penalty case in York County because prosecutors cannot seek the death penalty for people under the age of 18, under state law.

Jacob Matt Morgan had an initial appearance before a magistrate judge Tuesday afternoon in a courtroom adjacent to the York County jail in the basement of the Moss Justice Center in York. He was found to be indigent and the court appointed him a public defender.

Morgan has not previously been arrested in South Carolina, according to state records.

He is being held without bond, awaiting an opportunity to go before a circuit court judge. Magistrates cannot set bonds for defendants in murder cases.

The case has taken its toll on local fire and police officials “who tried so desperately to save Joshua’s life,” said York County Sheriff Bruce Bryant on Tuesday. “It’s tragic that such a young life was lost in this fire. Our prayers go out to the family of Joshua Hill.”

The intentional killing of a helpless toddler is “a truly terrible” act and one of the worst he’s seen in his 43 years in law enforcement, Bryant said.

“People, what they will do, never ceases to amaze me,” he said. “This family has been dealt a terrible blow. They were dealing with the death of the baby, and funeral arrangements, and now they have to deal with the fact that it is his brother who we have charged with committing this crime.”

Bryant added that he is proud of the volunteer firefighters and one of his deputies who was one of the first people on the scene. The deputy tried to get into the burning home to rescue the boy, but she could not breach the flames and heat that engulfed the trailer with the child inside.

Some people at the scene, including the half-brother now charged with murder and arson, were allegedly screaming at emergency responders on Friday after those responders could not save the child.

“She did everything she could do – everything – to try and save that baby and it has been very hard on her,” Bryant said. “She has lived through hell thinking about what she was not able to do. And now, this.”

Lesslie Fire Chief Tommy White said Tuesday that the news that the fire was set intentionally is “horrible.”

“My guys risked their lives that day and now we are finding out that it was done on purpose,” White said, adding that firefighters could have died trying to save the child.

Morgan is accused of setting the fire “with malice aforethought” to kill his half-brother while the child slept inside, arrest warrants state. Investigators based the arrests, in part, on Morgan’s own statements, according to the warrants

The day of the fire, a neighbor, Jessica Godbold, told The Herald that she heard screams and saw smoke. Godbold lives three doors down from the home where Joshua Hill died. She said on Friday that she saw someone going back into the house after flames broke out.

She identified that person as “Matt,” the child’s older brother. Matt’s hair, Godbold said, was singed by the fire.

Godbold said she tried to help a sheriff’s deputy – a first responder – get into the mobile home through a window. But, the glass exploded, she said, adding “it almost hit me, it was horrible.”

A man who identified himself on Friday as the child’s grandfather asked for the community to pray for his family. He added, “My grandson was full of life and laughter.”

Matt Morgan, 17, cried through much of his court appearance Tuesday when he was sentenced to 15 years in prison for setting a fire that killed his brother, 14-month old Joshua Hill in March 2015.

Morgan set a fire in the living room and to a blanket in the bedroom where Hill slept in their home on Catawba Church Road on March 6 while his parents were away.

Morgan said in a statement to deputies that he woke up from where he was sleeping on a couch in the living room and went back to the bedroom to try and save his brother but fire kept him out of the room.

However Deputy Solicitor Willy Thompson said that wasn’t the truth and Morgan later changed his story.

“He said then, that he actually never did go back to the bedroom to help the child. He went outside and observed the fire for some period of time,” Thompson said.

Morgan watched the fire burn the house while his brother died, officials said. He had a cellphone with him but did not call 911. Eventually he went to a neighbor’s home to get help.

Morgan’s parents and his grandparents stood behind him and said he would have never done such a thing on purpose.

“We have always believed in his innocence because we know our son,” said his mother Julie Morgan.

His stepfather Myke Hill said he’d never get over losing his baby son or losing his stepson to prison. Still, he stood by Matt Morgan and supported him.

“I’m not going to have any sheriff, any investigator, tell me to my face that he’s a cold-blooded killer when he cries at Disney movies,” Myke Hill said.

Prosecutors said Matt Morgan was fascinated by fire and had set a small one in his own room only two weeks earlier. On Monday, he spoke out in court about the death of his brother calling him his best friend.

Morgan was allowed to plea down to involuntary manslaughter instead of murder and unlawful conduct toward a child, instead of homicide by child abuse.

He also had a third charge reduced from first-degree arson to third-degree arson. On that charge he took an Alford plea, which means he doesn’t admit to the crime but understands the court still treats it as a guilty plea.

Jacob Matthew Morgan applied for parole in 2021 and it was denied. He is scheduled to be released in late 2022