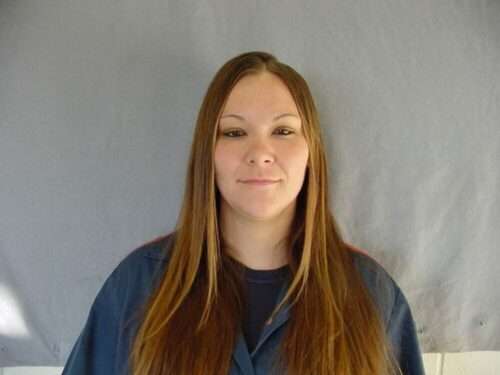 Angela McConnell was seventeen when she took part in a triple murder. According to court documents Angela McConnell and Brandy Jo Miller pretended they had car trouble at the home of an elderly couple which enabled the three men they were with to enter the home. Before it was all over the elderly couple and their adult daughter were murdered.

The brutal murder case went unsolved for seven years before the five were arrested. This teen killer was convicted and sentenced to life in prison

She’s one of only 10 women serving mandatory life sentences in Michigan prisons — and for a crime committed before she could vote or legally buy cigarettes.

Now 28, Angela McConnell says the prospect of spending the rest of her life behind bars is not what she finds most difficult. What is harder to accept, she says, is being away from her two young daughters.

“How many more birthdays are you going to be in there?” McConnell said her 12-year-old daughter asked her on the tween’s most recent birthday.

She knows that I’m here potentially for a long time,” McConnell said as she sat inside a quiet, sunlit visiting room at the Women’s Huron Valley Correctional Facility in Ypsilanti. “She knows that we don’t know if I’m ever coming home.”

McConnell, who is three years into her life sentence, was 17 when police and prosecutors say she and Brandy Jo Miller feigned car trouble so they and three men could gain access to the Pavilion Township home of Marinus and Sary Polderman and rob the elderly couple. What unfolded that day, Aug. 31, 2000, was one of the most brutal slayings in Kalamazoo County’s history.

The Poldermans and their daughter, Anna Gipson Lewis, 63, were stabbed and beaten to death, and the case went unsolved until 2007, when police charged McConnell; Miller; Miller’s brother, Andrew Miller; Benjamin Platt and Jerome “Joe” Williams. All were convicted.

McConnell and three other defendants are serving mandatory life sentences for first-degree murder; the fifth defendant, Brandy Jo Miller, pleaded to a lesser charge and is serving 13 to 221/2 years.

As McConnell reflected on the case that led to life behind bars, she spoke of growing up in Kalamazoo and Portage without a father figure. She was raised by a single mother who, she says, rarely disciplined her.

With few rules to follow, McConnell said, her teenage years were a string of “bad decisions, doing all the wrong things.” She began using alcohol and drugs, became pregnant at 15 and left high school well before graduation.

She said she met her co-defendants when she was 16 and the group introduced her to crack cocaine. By 19, she was married with two children, she said.

McConnell has been behind bars since she was 22, when she was sentenced to six months in the Kalamazoo County Jail for a probation violation. It was then, about five years after the Pavilion Township slayings, that detectives began interrogating her about the triple homicide.

“I figured it would be OK because I had been arrested before and investigated on it and . . . passed it all,” McConnell said.

This time, she didn’t pass.

It’s now been nearly six years since her arrest for the probation violation. During that time, she has been able to regularly talk to her oldest daughter but has not seen or spoken to her younger daughter, now 9.

After McConnell and the other co-defendants were charged in the triple homicide, Brandy Miller and McConnell each made plea agreements with the Kalamazoo County Prosecutor’s Office. The agreements called for each to plead guilty to second-degree murder and receive reduced sentences in exchange for their testimony against the other three suspects.

Under McConnell’s agreement, reached in July 2007, she would have served 35 to 521/2 years in prison. McConnell testified at Platt’s trial and the probable-cause hearings for Andrew Miller and Williams but then withdrew her plea in April 2008 and decided to take her chances at a jury trial.

“I was scared, and I didn’t know what else to do, and I didn’t want to get life in prison,” McConnell said of her decision to enter into the plea agreement in 2007 in exchange for her testimony and a reduced sentence.

Asked why she changed her mind and withdrew her plea, McConnell said, “Because I didn’t do it.”

Karen Wilcox, Lewis’ daughter and the Poldermans’ granddaughter, said she doesn’t hate McConnell and the other defendants for what they did to her family members. But she feels no empathy for McConnell and her longing for her daughters.

“I guess if she was truly innocent, I never would have said I was guilty to begin with,” Wilcox said. “It was sad, but at the same time by her reneging on (the plea), then she did get life in prison, and she’s the one who said she did these things. You know, my mom had a life sentence, too.

McConnell is among more than 350 “juvenile lifers” doing time with the Michigan Department of Corrections without chance of parole. That could change through a federal lawsuit in Detroit that has gained traction.

Attorneys who filed the suit are seeking mandatory parole reviews once young offenders turn 21 and then every five years thereafter. Attorneys say sentencing youths ages 14 to 17 to mandatory life without parole constitutes cruel and unusual punishment because the inmates are not allowed “a meaningful opportunity for release upon demonstrating their maturity and rehabilitation.” Michigan law also fails “to recognize the difference in moral culpability between adults and juveniles who commit first-degree homicide offenses,” the lawsuit argues.

A federal judge could issue a decision in the case this fall.

To fill her days, McConnell said, she is taking college classes in prison and working full time in the food-services area. She sees a therapist weekly and speaks with her oldest daughter daily.

“If I hadn’t talked to none of (my co-defendants) or been hanging around any of those people, I’d be home with my babies being the mom I’m supposed to be,” McConnell said. “And that’s what I think about a lot, being home with my kids.”