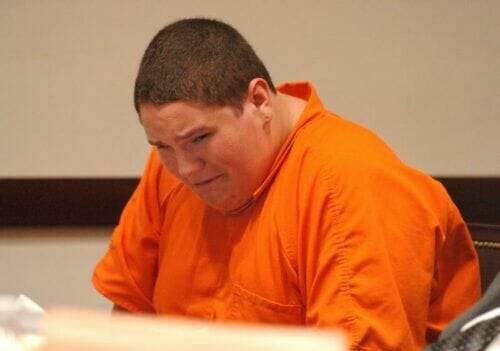 Warren Messner was fourteen when he and three other teens beat a homeless man to death in Daytona Beach Florida. According to court documents Warren Messner, Jeffrey Spurgeon, Justin Stearns, Phi Huynk and Chris Scamahorn would attack the victim just for something to do and fatally beat the man who was begging for his life. The teen killers would brag about the murder for weeks before they were finally arrested.

Four teenagers avoided life in prison Monday in the fatal beating of a homeless man in 2005.
Circuit Judge Joseph Will handed down sentences ranging from 35 years to 22.28 years in prison in the death of Michael Roberts, who was kicked and crushed when the teenagers jumped on a log on his chest in May 2005 in Holly Hill.
Jeffrey Spurgeon, 19, Justin Stearns, 18, Warren Messner, 16, and Chris Scamahorn, 15, pleaded guilty late last year to charges of second-degree murder and conspiracy to commit first-degree murder.
Spurgeon was sentenced to 35 years in prison, Stearns to 27 years, Scamahorn to 35 years and Messner to 22.28 years. All four will be on probation for the rest of their lives, court spokeswoman Linda Pruitt said.
Prosecutors asked for life in prison, saying the teens beat the man to death as he begged for his life and bragged about the killing for weeks before they were caught.
“Very, very few people are capable of committing such a heinous, brutal murder of an innocent person, and when it is done, the people who do that need to be kept away from society. Society deserves that protection,” prosecutor Ed Davis said.
Defense attorneys said the teens had family and drug problems and did not understand the severity of the crime.
A fifth youth, Phi Huynk, 16, still faces a charge of aggravated battery.

Two 15-year-old boys were arrested Friday for the roles investigators said they played in the beating death of a 53-year-old homeless man in Holly Hill last month.

Warren Messner, of Holly Hill, and Phi Huynh, of Daytona Beach, became the fourth and fifth teenagers charged with participating in the beating of Michael Eugene Roberts, whose alcoholism drove him to a life in the backwoods of Holly Hill.

Messner has been arrested on a charge of second-degree murder and Huynh faces a charge of aggravated battery, a felony, the Volusia County Sheriff’s Office said Friday. Both boys were taken into custody about 4 p.m. Friday and were taken to the Volusia Regional Juvenile Detention Center in Daytona Beach.

These two teenagers face lesser charges than the first three teens arrested last week. Jeffery Spurgeon, 18; Justin Stearns, 18; and Christopher Scamahorn, 14, were indicted Thursday on charges of first-degree murder and conspiracy to commit murder. If convicted of first-degree murder, Spurgeon and Stearns could face the death penalty. Scamahorn is not eligible for the death penalty because of his age, but he will be tried as an adult.

Sheriff’s investigators have said that as many as five people may have been involved in attacking Roberts, who was living in the woods off Nova Road near Holly Hill. Roberts suffered through three separate attacks on May 25, over the course of a couple of hours, during which he was punched, kicked and beaten with a stick, deputies said. Then a large log was thrown on top of Roberts’ chest and some of the teens apparently jumped up and down on the log, according to reports.

One of the teens said they beat him up to have something to do, according to reports. Roberts’ body was left in the woods for three days until the mother of one of the defendants heard talk of the body and called authorities.

When the investigation started, Messner and Huynh admitted to being in the woods during the attacks but denied taking part, deputies said. However, investigators found new witnesses and re-interviewed other witnesses who could implicate them, sheriff’s spokesman Gary Davidson said Friday. Some of the first three defendants also said that Messner and Huynh were involved.

Messner is accused of striking Roberts with a stick and jumping up and down on the log while it sat on Roberts’ chest, while Huynh is accused of throwing rocks at Roberts and punching him in the face with his bare fists, the Sheriff’s Office said.

Investigators said that Messner and Huynh talked about the beating to friends and acquaintances, who have now become witnesses in the case and told authorities what they heard. According to an arrest report, Huynh told a witness that he had “hit the dude” a couple of times and that he was “still out here while everybody else is in there,” which is an apparent reference to the other defendants who have been in custody for two weeks.

Messner also had a conversation during which he punched a light pole and said that punch was “worse than killing the homeless dude,” according to an arrest report.

Davidson said that no additional arrests are anticipated, but he said the investigation continues.

Scott Katona, who said he has lived up the street from the Messner family for about eight years, did not seem surprised by the boy’s arrest Friday.

“When we first moved here, he was into trouble a lot, but he never bothered me personally,” Katona said. “He used to run around with another kid that was always into something, but that kid moved away a few years ago. He hangs around with a different bunch now.”

Katona was surprised, however, by Warren’s age. “I would have thought he was about 18,” he said. “He’s really big-boned and a pretty big kid for 15. I thought he probably was about to move out of the house.”

According to the arrest reports, Messner is 5 feet 10 inches tall and weighs 280 pounds. Huynh weighs 115 pounds and is 5 feet 6 inches tall.

A man who answered the phone at Messner’s house would not comment. Huynh’s family could not be reached for comment late Friday.

Roberts’ sister, Barbara Burns of Dunnellon, said she was shocked to hear of more boys arrested in her brother’s slaying.

“We had been told the investigation was still ongoing and more arrests were possible,” she said. “To find out more people are involved is a big shock.

“They’re just so young,” Burns said of the defendants. “I just don’t comprehend this.

“What is going through these children’s minds?”

Warren Messner’s mother wailed and sobbed into the shoulders of friends and family Monday after a judge told her son he would not reduce the 22 years Messner must spend in prison for participating in the killing of a frail homeless man.

Lori Messner had hoped her son — once described by her in court as a class clown who often was picked on by older children — would spend less time behind bars after his attorney argued the 17-year-old was a minor participant and under the domination of three other teens when they killed 53-year-old Michael Roberts.

The four beat Roberts with sticks, fists and logs on three separate occasions. Warren Messner was present for only the final attack.

Warren Messner’s attorney on Monday asked the judge to reconsider his client’s sentence during an hourlong hearing. Richard Whitson again brought up the fact that Messner was teased into participating in the May 2005 beating and was “like a mouse who was following the pied piper off the edge of the cliff” when he went along for the third attack. Whitson said Messner tried to stop the melee but was threatened by the others.

Circuit Judge Joseph G. Will said he saw no new evidence since he made his decision in April to make him change his mind.

“I was wanting to see something in the record that was different than before,” he said. “I can’t think of a reason to change the sentence.”

Lori Messner declined to comment as she stormed out of the courtroom.

The attacks in the woods of Holly Hill were so violent that Roberts suffered skull fractures and half his ribs were broken, the medical examiner determined. Any of the three blows that cracked his skull or the multiple strikes that broke his ribs could have been fatal, but Dr. Thomas Beaver said it was probably a blow to the base of Roberts’ skull that ended his life.

Warren Messner, who was 15 at the time of Roberts’ killing, received the shortest prison sentence of the four convicted killers.

Jeffery Spurgeon and Christopher Scamahorn were sentenced to 35 years in prison, and Justin Stearns received 27 years. They all were sentenced to probation for life and, once released, must keep jobs until retirement age and never use drugs or alcohol.

Messner’s attorney, Whitson, argued the “shock” of prison could be enough to make his client change his ways when asking again that Messner be sentenced under the state’s youthful-offender law, which calls for a maximum six-year penalty.

Warren Messner is incarcerated in a youth camp at Indian River Correctional Institution, where he must spend most of his day locked alone in a 6-by-9-foot cell. He is allowed out for three meals a day and a shower but does not have access to a television or books, Messner told the judge.

He can’t participate in any schooling and spends most of his days sleeping, he testified.

Assistant State Attorney Ed Davis said Warren Messner was a willing and active participant who got a break by being able to plead to charges of second-degree murder. He told the judge he thought a jury would have convicted him of first-degree murder and sent him to prison for life.

“He needs to take responsibility for what he did,” Davis said.

The victim’s sister said she was pleased by the judge’s decision. Barbara Burns, who did not attend the hearing because her husband is sick, said she felt Messner already got a break because he received the shortest prison sentence.

“I think he deserves it,” she said of the prison term that will keep Warren Messner is prison until he is in his late 30s. “These are kids that do not need to be on the streets living amongst us.”