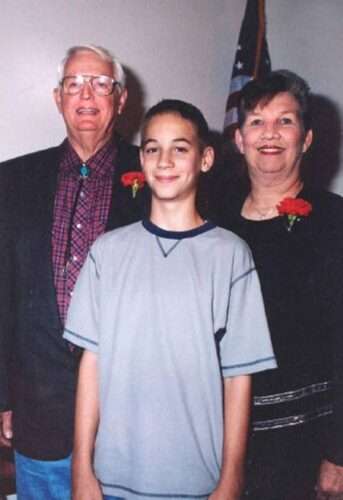 Christopher Pittman was just twelve years old when he murdered his grandparents. According to court documents Christopher was involved in an altercation at school, interrupted the piano player at church and would be disciplined by his grandfather later that night for his actions. Pittman responded by grabbing a shotgun and shooting his grandparents who were sleeping in their bed. Christopher using a candle and paper would set fire to the house and would take off stealing his grandparents car and a bit of money. Soon the teen killer would get stuck and would be arrested by police.

Initially he told police he was kidnapped after his grandparents were murdered however he would soon confess to the double murder. On the main aspects at his trial was whether or not the use of the antidepressant Paxil had anything to do with the double murder. Apparently not as this teen killer was sentenced to thirty years in prison which was later reduced to twenty five years on appeal. Christopher Pittman is scheduled to be released in 2023

In November of 2001, Christopher Pittman (Appellant) shot and killed his paternal grandparents, Joe Frank and Joy Pittman, at close range with a .410 shotgun.   At the time of the incident, Appellant was twelve years old and had recently come from Florida, where he lived with his father, to live with his grandparents in Chester, South Carolina.

Shortly before moving to Chester with his grandparents, Appellant’s relationship with his father became strained.   Specifically, Christopher Pittman had attempted to run away from home, and also had threatened to harm himself with a knife.   In response to this behavior, Appellant’s father committed him to an inpatient facility.   While at the facility, Appellant began taking the antidepressant Paxil.   Soon after a short period of commitment, Appellant’s father had him released from the facility and agreed to allow Appellant to live with his grandparents in Chester.

Upon moving to Chester, Christopher Pittman enrolled in school and began to actively participate in church with his grandparents.   His grandmother also continued Appellant’s treatment for depression by taking him to a local physician to refill his Paxil prescription.   The physician did not refill the Paxil prescription, but instead offered free samples and a prescription of Zoloft.1

On the day of the murders, the assistant principal of Appellant’s school called Appellant’s grandparents to the school in response to an incident which occurred the previous day on the school bus.   During the incident in question, Appellant allegedly choked a second grade student.   After leaving the school, Appellant and his grandparents attended choir practice.   The church musician testified that she admonished Appellant for kicking her chair, at which time his grandfather took him outside to talk to him.   Upon their return, the musician noted that Appellant had an angry expression.

Early the next morning, two hunters found Appellant wandering around in the woods with a shotgun.   Appellant told the hunters that he had been kidnapped by a black man who had shot his grandparents and set their home on fire.   Appellant further told the hunters that he was able to escape when the kidnapper got the SUV stuck in the woods.   He further stated that the kidnapper had shot at him before throwing the vehicle’s keys and running into the woods.   Upon hearing this story, the hunters, who were also firemen with the Corinth Fire Department, took Appellant to the fire station where they alerted the police.

A search ensued for the black man who allegedly committed the crimes as Appellant suggested.   During this time, Chester deputy Lucinda McKellar (McKellar) arrived to speak with Appellant.   Under the impression that Appellant was a victim and possible witness to the crimes, McKellar took an oral and written statement from Appellant.   In the statements, Appellant related the story that he had told the hunters.

As the search for the alleged kidnapper continued, the Chester police were also conducting an investigation of the crime scene.   At some point in the afternoon, McKellar’s supervisor notified her that the information from the crime scene and the search of the vehicle indicated that Appellant was a possible suspect in the crimes.   At that time, McKellar took Appellant to the police station.

When they arrived at the police station, McKellar took Appellant to a conference room and told him that they needed to have an “adult conversation.”   Pittman sat down at the table and McKellar explained the Miranda rights.   At that time, Appellant gave the officers a third statement in which he confessed to the murders and detailed the events of the night.   McKellar wrote the statement and Appellant read and signed it.

After his confession, the police arrested Appellant for double homicide and arson.   The prosecution filed a motion with the family court to waive its jurisdiction, which the family court granted.   After several pretrial motions, various continuances, and delays, Appellant’s trial was held from January 31, 2005 to February 15, 2005.   The jury convicted Appellant on both counts of murder.   The trial judge sentenced Appellant to the shortest sentence possible under the mandatory minimum sentencing guidelines-two concurrent terms of thirty years imprisonment.