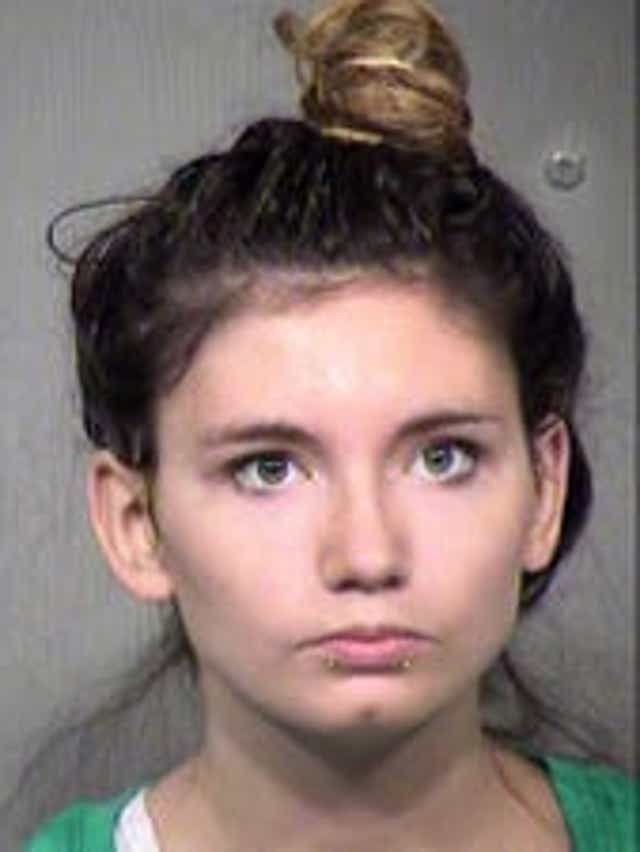 This teen killer would tell police that her ex boyfriend broke into their home and fatally shot her father but soon her story would fall apart. Jocelyn Norton was sentenced to twelve years in prison after pleading guilty to second degree murder.

Judge Pamela Gates sentenced Tonopah teen Jocelyn Norton to 12 years in prison Thursday after pleading guilty to helping her boyfriend kill her father, according to Bryan Bouchard, a Superior Court of Arizona spokesman.

In 2017, Norton and her boyfriend Daniel Stroh planned to kill Norton’s parents John Norton Sr. and Theresa Norton, according to court records. Jocelyn Norton hid her father’s gun so she could give it to her boyfriend.

After shooting John Norton, who was holding Jocelyn Norton’s baby and had her 13-year-old sister next to him, Jocelyn Norton and Stroh fled the scene, planning to go to Theresa Norton’s work to kill her. The two left the baby and the sister in the car.

Court records show that Jocelyn Norton and Stroh changed their plans and left the gun in the desert.

A day after the shooting, Jocelyn Norton called 911 and gave them a different story than what happened. She claimed that her ex-boyfriend killed her father after forcing his way into the home, according to court records.

Stroh told detectives Jocelyn Norton gave him an ultimatum: She would shoot herself if he didn’t shoot her father, according to court records.

Stroh, 23, was found guilty of second-degree murder and tampering with physical evidence in July. He is set to have a Rule 11 Hearing on Oct. 1, according to court records. Under Rule 11, a defendant has a right to a full mental examination and hearing if needed, according to Maricopa County Attorney’s Office.

A Tonopah teenager who pleaded guilty to helping her boyfriend kill her father in 2017 has been sentenced to 12 years in prison.

Jocelyn Norton was sentenced Thursday after entering a plea agreement in the case earlier this month and pleading guilty to second-degree murder.

The 17-year-old Jocelyn Norton was charged as an adult in the case.

Her co-defendant — 23-year-old Daniel Stroh — is facing charges of first-degree premeditated murder and tampering with evidence.

Prosecutors say the then 15-year-old Jocelyn Norton hid her father’s gun so she could give it to Stroh.

They say Stroh hid in the Norton home near 373rd Ave. and Buckeye Rd. as Jocelyn Norton waited outside

Stroh is accused of fatally shooting John Norton Sr. in the home’s kitchen in October 2017 before he and his girlfriend fled the scene.

An Arizona teenager accused of conspiring with her adult boyfriend to kill her adoptive father two years ago was sentenced to more than 10 years in prison Thursday, authorities said.

Jocelyn Norton was 15 when she was arrested following the Oct. 23, 2017, fatal shooting of 59-year-old John Norton Sr. in Tonopah, about 50 miles west of downtown Phoenix.

She was initially charged as an adult with first-degree murder. Last month, she pleaded guilty to second-degree murder and two lesser charges

Investigators said Jocelyn Norton gave Stroh, who was 21 at the time, a gun and told him to shoot her father, who did not approve of their relationship