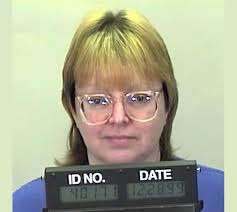 During the early morning hours of February 10, 1992, a fire broke out at Robin Lee Row’s two-story apartment in a duplex at 10489 Seneca, in Boise, Idaho, and local fire trucks were dispatched to the scene.   Due to recent problems in her relationship with her husband, Row was not living at the residence at that time.   Instead, she was staying with a friend, Joan McHugh.   After the fire was sufficiently under control, fire crews entered the apartment and found the bodies of Row’s husband, Randy Row, and her two children, Joshua (age 10) and Tabitha (age 8).   All three had died from carbon monoxide poisoning as a result of the fire.

Fire investigators found that the fire primarily started where the apartment joined the garage and that a second fire was started in some clothes piled in the living room.   The investigators determined that a flammable, liquid accelerant was used to ignite the fire, and found that the smoke detector in the residence had been disabled before the fire when the power to the upstairs was cut off at the circuit breaker.   As a result of the disconnected smoke alarm, the victims were not alerted to the fire which caused their deaths. An investigation by the police ensued.

The police discovered Robin Lee Row had lost a daughter to Sudden Infant Death Syndrome in 1977, and that her son, Keith, had died in a house fire in California in 1980.   A warrant was obtained to search Row’s burned apartment, Joan McHugh’s residence where Robin Lee Row was staying on the night of the fire, Row’s automobile, and Row’s storage unit located in Meridian, Idaho. During the search, the police discovered six insurance policies carried by Row on the lives of the deceased members of the Row family.   These policies named Robin Lee Row as the beneficiary and provided a total of $276,500 in death benefits.   The most recent policy had been obtained by Row on January 24, 1992, just seventeen days before the fatal fire.

In addition, at the storage unit in Meridian, police discovered evidence tending to prove that Robin Lee Row had been stealing from the bingo operation run by the YWCA where Row worked.   This discovery resulted in Row’s arrest on February 13, 1992, for grand theft by unauthorized control of funds belonging to the YWCA.   She was placed in the Ada County Jail, and bail was set at $100,000. While the arson and multiple-death investigation continued, Detective Raney prevailed upon Joan McHugh to put a tape recorder on her telephone to record conversations between herself and Row, if Row happened to call.

Around 1:00 on the afternoon of March 20, 1992, Row telephoned McHugh from the jail.   As suggested by Detective Raney, McHugh told Robin Lee Row that she had awakened during the night of the fire and had gone downstairs, but could not find Row in the residence.   In response, Robin Lee Row told McHugh that she had left the residence that night, but stated that she was outside the house talking to her psychiatrist. At about the same time on March 20, police and the prosecutor were holding a press conference to announce that a criminal complaint for three counts of murder had been filed against Row.   The following Monday, March 23, Robin Lee Row was arrested while still in the Ada County Jail.   She made her initial appearance before the magistrate that same day.   The complaint was subsequently amended to include the charge of aggravated arson.

Robin Lee Row’s counsel filed a series of pretrial motions seeking to suppress statements Row had made to McHugh while she was incarcerated on the theft charge.   The district court denied these motions.   On March 5, 1993, following a jury trial, the jury returned verdicts of guilty on the murder and arson charges.   A sentencing hearing was held, and on December 16, 1993, the district court imposed the death sentence.   Row filed a notice of appeal on January 26, 1994.

Attorneys for the only woman on Idaho’s death row say Robin Lee Row’s triple murder conviction should be thrown out because her trial attorneys didn’t have the time or money to develop evidence that Row’s brain had atrophied, and the damage may have hindered her decision-making abilities.

Row, now 52, was convicted of murdering husband Randy Row, 34, and her children from a previous marriage, Joshua Cornellier, 10, and Tabitha Cornellier, 8, by setting their duplex on fire in 1992. Row had two other children who died years earlier — a baby who investigators said died of Sudden Infant Death Syndrome and a son named Keith who was killed in a 1980 California house fire that investigators ruled accidental.

Fourth District Judge Alan Schwartzman sentenced Row to death in 1993, calling her a pathological liar and citing her purchase of $276,000 worth of life insurance for her family the year before they died.

“Robin Row’s actions represent the final betrayal of motherhood and embody the ultimate affront to civilized notions of maternal instinct,” Schwartzman said during her sentencing. “Maternal ’pedocide’ — the killing of one’s own children — is the embodiment of the cold-blooded, pitiless slayer — a descent into the blackened heart of darkness.”

Row’s appeals attorney, Teresa Hampton, told U.S. District Judge B. Lynn Winmill on Thursday that her client’s trial attorneys didn’t do enough to develop evidence that could have resulted in a lesser sentence.

“There is significant and powerful mitigating evidence that should have been developed at trial,” she said.

But Hampton said a CT scan showing Row had brain atrophy is “the major red flag in this case” that, if explored, could have changed the outcome. Brain atrophy is a loss of brain cells and the connections between them, and it can occur for a number of reasons, including trauma and disease. The damage left by atrophy can sometimes lead to mental illness, dementia and other problems.

Row’s trial attorneys did ask the court for money to hire an expert to evaluate Row’s brain function and history, but the trial judge refused their request and instead referred them to the public defender’s budget, Hampton said. The judge also refused to allow them additional time to investigate on their own, she said.

But Jessica Lorello, the deputy attorney general representing the state, said Row’s trial attorneys were never deprived the money or the time they needed to come up with mitigating evidence.

“The court’s position always was, ’I don’t know why you can’t take this out of the public defender’s budget,”’ Lorello said. “In terms of that social history evidence … the court determined it ultimately wouldn’t have made a difference.”

Winmill said he would take the matter under advisement and could have a ruling in the next several weeks.