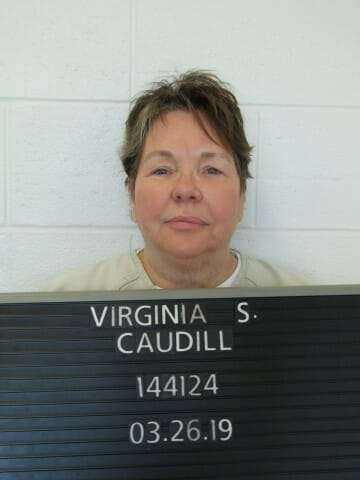 Virginia Caudill is the only woman on Kentucky Death Row for a brutal robbery and murder of an elderly lady. According to court documents Virginia Caudill and Johnathan Goforth would enter the home of the elderly victim and would viciously beat the woman to death before stealing her belongings. Virginia Caudill would be arrested, convicted and sentenced to death

Virginia Caudill and Jonathon Goforth broke into Lonetta White’s home and beat her to death with a hammer when she refused to give them money to buy drugs. After ransacking her home for valuables, they wrapped her body in a carpet and loaded it in the trunk of her own car. They drove the car to an empty field, doused it with gasoline, and set it on fire. An autopsy revealed that she died from massive head injuries, including blows that caved in parts of her skull.

A federal judge on Monday rejected an appeal from the lone woman awaiting execution in Kentucky after concluding her attorney wasn’t deficient at trial and there wasn’t any evidence a co-defendant acted on his own.

The decision by U.S. District Judge Danny C. Reeves in Lexington moves 53-year-old Virginia Susan Caudill a step closer to an execution date as the state and several inmates battle through litigation over whether a lethal injection process involving either one or two drugs passes constitutional muster.

In a 125-page opinion, Reeves turned away a multitude of arguments brought by Caudill concerning the effectiveness of her attorney in handling witnesses and a strategy based on claiming that a co-defendant, 53-year-old Johnathan Wayne Goforth, had more of a motive to rob and kill 73-year-old Lonetta White in Lexington on March 15, 1998.

The two were convicted in 2000 of bludgeoning White to death with a hammer and stuffing her body in the trunk of her own car, which was later set ablaze.

Caudill claimed at trial that Goforth, an associate who frequented the same drug den as her, unexpectedly robbed and beat White to repay a drug debt after tying up Caudill in a separate room.

“There was no evidence that Caudill had attempted to stop the assault on White or flee the residence once it began,” Reeves wrote.

Reeves noted that Caudill followed Goforth as he drove White’s car with her body stuffed in the trunk to a remote area with plans to burn it. During the drive, Caudill made no attempt to flee, Reeves wrote, and continued to associate with Goforth for months after the slaying.

Caudill may still appeal to the U.S. 6th Circuit Court of Appeals in Cincinnati and the U.S. Supreme Court.

Kentucky is currently prohibited from executing any inmates under an injunction handed down by Franklin Circuit Judge Phillip Shepherd in 2010. In December, Shepherd cleared the state’s proposed use of one or two drugs to carry out a lethal injection.

But, Shepherd ruled, executions cannot go forward because there are issues with how inmates are handled and their mental state assessed in the days and weeks leading up to an execution date.

Kentucky has carried out three executions since the reinstatement of the death penalty in 1976. The last inmate put to death was in 2008.