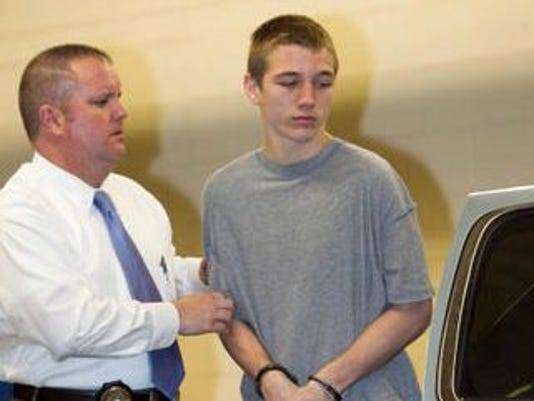 Tyson Langley would murder two people during a robbery in Arizona. According to court documents Tyson Langley would walk into a Peoria Arizona and would shoot two people in the head. When Tyson Langley was arrested in California and extradited back to Arizona where he would stand trial and be convicted of both murders and robbery. This teen killer was sentenced to two twenty one year sentences to be served consecutively

Most Recent Location As of Date Complex Unit Last Movement

A teenager who pleaded guilty to killing two people during a 2012 Peoria smoke-shop robbery was sentenced to 42 years in prison by a judge Feb. 28.

Maricopa County Superior Court Judge Bruce Cohen sentenced Tyson Langley to consecutive 21-year terms in prison for second-degree murder and armed robbery in a hearing on Friday morning in downtown Phoenix, ending the saga that began when the teen walked into a Peoria smoke shop on Jan. 17, 2012 and shot two people in the head during a robbery.

The family of one of the victims, Melinda Bowen, said they wanted Langley to receive the death penalty, which is not given to minors. They expressed anger with having to pay taxes that will pay for Langley to live in prison until the teen is in his mid-50s.

Lathea Nezilla, Bowen’s older sister, refused to say Langley’s name when she talked in front of the judge.

Why you had to come into our lives is not fair because I don’t want to be in his life,” she said. “But he took someone very dear to me and for that I hate you.”

The family of the second victim, Kenneth Matlock, choose not to speak.

Both the prosecution and defense attempted to speculate about why Langley, an intelligent and good kid, killed two people and shot another. They suggested Langley’s use of the synthetic drugs, his anger after discovering information about his mother and stepfather’s sex lives or a lack of impulse control.

Langley’s stepfather and mother both spoke and apologized to the victim’s families. His mother struggled to begin reading her prepared statement and Langley cried during part of it.

The teen apologized for his actions.