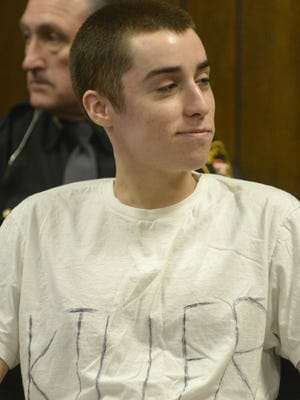 TJ Lane is a school shooter from Ohio who at seventeen years old would bring a gun to school and shoot dead three fellow students. According to court documents TJ Lane, also known as Thomas M Lane III, would bring a .22 calibre gun to school where he would open fire striking and killing three students.

At trial TJ Lane showed no remorse and on the day he was to be sentenced would somehow get hold of a black marker and write the word Killer on his t-shirt. Along with insulting the victim’s families TJ Lane basically made sure that he would receive the maximum sentence which would be life in prison with no chance at parole.

A convicted high school shooter in Ohio built a 13-foot ladder out of old cabinets to escape from a prison along with two other inmates, a jailbreak that put the community where Thomas “T.J.” Lane carried out his killing spree on edge, the state department of corrections said in a report Friday.

Lane, 20, broke out of Allen Correctional Institution in Lima, Ohio, on Sept. 9, and remained on the loose until he was captured six hours later. Lane is serving three life sentences for killing three students in a hail of gunfire at Chardon High School in 2012. Prison officials personally met with the victims’ families to explain how Lane was able to escape, NBC station WKYC reported.

The report from the Ohio Department of Rehabilitation and Correction said Lane and the other two inmates, Lindsey Bruce and Clifford Opperud, fashioned their ladder over several months from materials inside a crawlspace located adjacent to the recreation yard. The door was padlocked, but the inmates were able to break in anyway, the report said. On Sept. 9 they used the ladder to get on top of a building near the prison entrance at around 7:40 p.m. and jump 15 feet down to the ground and escape through a soybean field, the report said.

Bruce was arrested almost immediately, but Lane was on the run for almost six hours, until he was arrested at 1:20 a.m. in a wooded area near the prison. Opperud, a convicted robber and burglar, was arrested at 4:22 a.m. by officers who tracked him with a police dog. The prison will be upgrading padlocks with more secure locks, razor wire was added on top of the building the inmates used to escape, and the area where the prisoners built their ladder was closed. The report found the inmates had “unimpeded” access to the maintenance area on their way to and from the recreation yard.