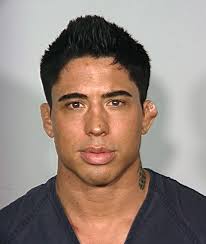 War Machine whose real name is Jon Koppenhaver was an MMA fighter with a mediocre career who began performing as an adult performer. War Machine, yes he legally changed his name, began dating adult star Christy Mack and soon after the trouble begin.

War Machine aka Jon Koppenhaver was a severely jealous individual and when he began suspecting that Christy Mack was cheating on him. The couple would soon break up but War Machine was still obsessed with the adult actress.

War Machine would go to Christy Mack residence where he found her home with one of her friends. War Machine went berserk leaving the young woman with an extensive list of injuries: 18 broken bones, a broken nose, 12 missing teeth, a fractured rib and a ruptured liver

The former mixed martial arts fighter known as War Machine was found guilty Monday of kidnapping, beating and sexually assaulting his ex-girlfriend over several months in 2014, and of beating her male friend when he found them together in her bedroom.

Nevada jurors deadlocked on two attempted-murder counts against Jonathan Paul Koppenhaver but convicted him of 29 felonies stemming from attacks on Christy Mack and Corey Thomas.

The Associated Press normally does not identify people who say they are victims of sexual assault, but Mack gave AP permission to use her name.

Neither she nor Thomas was in the courtroom while Koppenhaver, 35, stood flanked by his lawyers. He folded his arms across his chest as the verdicts were read.

Koppenhaver shook his head a little as he heard “guilty” to the two most serious counts — kidnapping and sexual assault with a weapon. Each could get him up to life in prison without the possibility of parole.

“He’s a tough guy. He stood there and took the verdicts,” Leiderman said. “But it’s obviously the worst day of his life.”

Koppenhaver was acquitted on three lesser counts — battery with intent to commit sexual assault, burglary with a weapon and sexually motivated coercion.

The jury of six women and six men left the courthouse without speaking with reporters or attorneys.

“I think what was important to Ms. Mackinday was that the jury believed her in regards to previous conduct that she never reported,” Bluth said. “What that says to domestic violence victims is that even if you don’t report it right away, a jury can still believe you.”

In closing arguments, Leiderman characterized Koppenhaver as a “raging bull” with brain injuries from his fighting career and emotions inflamed by the use of steroids and non-prescription stimulant and antidepressant drugs that combined could have caused mood swings and violence that the defense attorney termed “roid rage.”

Mack, 24, spent eight hours on the witness stand, crying as she said she was beaten and raped by Koppenhaver several times in the months before the August 2014 attack on her and Thomas.

Thomas, a digital media company owner, testified that he dated Mack for two months before Koppenhaver arrived at her home unexpectedly, flipped on the bedroom lights and set upon him on the bed with rapid-fire punches and choking.

Thomas testified that he suffered a broken nose, dislocated shoulder, scrapes, bruises and bite marks. The beating stopped, he said, when he asked Koppenhaver if his “end game” was going to be to kill him or let him go.

Mack testified that Koppenhaver attacked her after Thomas left. The jury saw photos of Mack with a broken nose, missing teeth, fractured eye socket and leg injuries. She also suffered a lacerated liver.

Mack said she fled her home and ran bleeding to neighbors’ homes when Koppenhaver went to the kitchen to fetch a knife.

War Machine AKA Koppenhaver was arrested a week later in the Los Angeles suburb of Simi Valley and was returned to Nevada. He has been serving a one- to four-year sentence for violating his probation on a 2009 conviction for attempted battery involving a 21-year-old woman.

War Machine AKA Koppenhaver made his Ultimate Fighting Championship debut in 2007. He had a 14-5 record as a welterweight and legally changed his name to War Machine. His final fight was in 2013.

He was dropped by his fight promoter and his clothing line after Mack’s accusations became public.