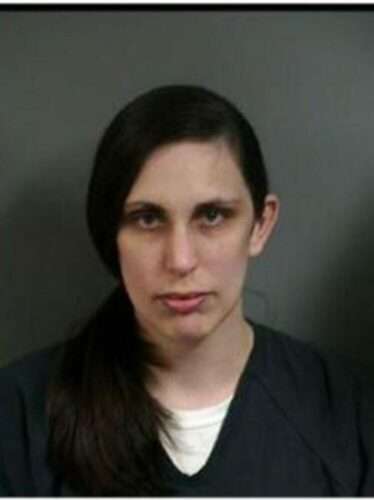 Cheyanne Jessie was a twenty five year old woman from Lakeland Florida who would call 911 to say that her daughter and father were missing. When police came to investigate they would soon learn that it more than a missing person case. Soon investigators would discover that Cheyanne Jessie had murdered the child and her father weeks before the 911 call was made. Cheyanne Jessie was arrested and convicted of both murders.

The Florida woman was sentenced to life for her fathers murder however the jury recommended that she be sentenced to death for the murder of her child. The judge presiding over the case did not agree and sentenced her again to life in prison without parole.

Convicted double-murderer Cheyanne Jesse will spend the rest of her life in prison for the brutal murders of her 50-year-old father, Mark Ivan Weekly, and 6-year-old daughter, Meredith Leeann Jessie.

Cheyanne Jessie, who is now 31, confessed in August 2015 to killing her father and daughter, who investigators believe died on July 18, 2015 — the day they were last seen by a friend of Weekly’s. Weekly was stabbed at least 12 times and shot in the head three times, while Meredith was repeatedly stabbed and shot in the back of the head. It happened in Weekly’s rented west Drane Field Road home.

Following the murders, Jessie placed the bodies in two plastic storage bins and put them in a shed in their landlord’s backyard next door to their home, where they decomposed throughout the last two weeks of July. Prosecutors said her boyfriend wanted to break up with her because Meredith had extreme behavior issues for which she was placed in in-patient psychiatric care at one point.

“The defendant, the court concludes, was unable to cope with the severe stress that was created upon her due to her daughter’s emotional and behavioral conditions,” Harb said. “The defendant was diagnosed with major depressive disorder and suffered from numerous psychological deficits.”

Harb cited Jessie’s own mental capacity when he handed down the life sentence on Friday afternoon.

“The first-degree murder was committed while Cheyanne Jessie was under the influence of extreme mental or emotional disturbance,” Harb said. “The circumstances of the capacity of Cheyanne Jessie to appreciate the criminality of her conduct or to conform her conduct to the requirements of the law was substantially impaired.”

He went on to say that Jessie had been physically and sexually abused as a child while she was living with her mother and, when she was 4 years old, she was removed from her mother’s custody and given to her father to raise.

“When she came to live with her father, she had difficulties walking, talking and had other developmental difficulties,” Harb said. “Around the time of the homicides, the defendant was described as mentally and emotionally unstable and extremely depressed and that she was controlled by her boyfriend.”

As Harb was sentencing her, Jessie, sitting in the jury box, could be heard mumbling something as she kept her face hidden. A court bailiff, who was standing close to her, later said Jessie was trying to tell the judge she did not commit the murders. During the trial, her attorneys said her boyfriend, Matthew “Cody” Munroe, had committed the crimes and Jessie had confessed because she was afraid of him.

No woman from Polk County has ever received the death penalty.

On Friday, the only people in the courtroom were the judge and his assistant, Jessie’s two attorneys, two attorneys for the state, several court bailiffs, a court reporter and two journalists from The Ledger. No one from Jessie’s family, Weekly’s family or Meredith’s father’s family attended the brief hearing

Prosecutor Paul Wallace said Meredith’s father lives in Georgia and had very little to do with the girl when she was alive.

Following the hearing, one of her two attorneys, Jervis Wise, said they were satisfied with the sentence.

“We think the court made a fair and just decision under difficult circumstances,” Wise said.

In July 2019, a jury recommended the death sentence for the murder of Meredith, while they voted 10-2 for a life sentence for Weekly’s murder.

When Harb was finished, Jessie was fingerprinted and taken to a holding cell. She will spend the remainder of her life in a Florida prison for women.

Cheyanne Jessie shook her head vigorously and mouthed the word “no” Wednesday morning after a jury found her guilty of killing both her 6-year-old daughter and her father.

The jury needed slightly less than three hours to determine that the Lakeland woman fatally shot Meredith Jessie and Mark Weekly at her father’s home almost exactly four years ago.

The jury of nine women and three men delivered guilty verdicts on two counts of first-degree murder against Cheyanne Jessie, 29. She was also convicted of tampering with physical evidence for hiding the bodies after the slayings.

One juror appeared to be crying as the panel entered the courtroom to deliver the verdicts.

Authorities found the decomposed bodies of Mark Weekly, 50, and Meredith Jessie stuffed in storage bins on Aug. 1, 2015 — about two weeks after they were last seen alive.

The jury began deliberating Tuesday afternoon and broke for the evening after about an hour. The panel gathered again Wednesday morning at about 9 and returned to the courtroom of Judge Jalal Harb less than two hours later to deliver its judgments.

Cheyanne Jessie, who did not take the witness stand, had displayed virtually no emotion throughout the 13-day trial. She kept to a fixed position at the defense table, her torso tilted forward and her head down and turned to the right, away from the view of those in the gallery. Jessie stared down at a notepad on which she continually wrote or drew.

Soon after Harb read the jury’s verdicts, Jessie reached a hand under her eyeglasses to wipe away tears a few times. Defense lawyer Debra Tuomey reached over and rubbed Jessie on the back.

After she left the courtroom minutes later, Cheyanne Jessie could be heard crying loudly in an adjacent room.

The State Attorney’s Office will now try to convince the jury that Jessie should be the first woman from Polk County ever given a death sentence. The penalty phase of the trial was scheduled to begin Wednesday afternoon. A death sentence requires a unanimous vote by the jury.

Mark Weekly’s older brother, Mike Weekly, attended the trial with his wife, Janita Weekly. The couple traveled from Indiana to attend the trial. Mike Weekly, 65, sat in the gallery near the defense table, his expression somber throughout the testimony.

“I’m feeling a little bit of relief,” Mike Weekly said after the verdicts were announced. “A lot of stress is off me now.”

“My heart kind of dropped a little bit because I was kind of pulling for her for three years,” Weekly said of her reaction to the verdicts. “I didn’t want to believe she killed her child and her dad. It’s something that’s hard to swallow.”

Weekly said she hopes Cheyanne Jessie receives a life sentence rather than the death penalty. In that case, she would be placed in a prison’s general population, where other inmates are “not going to be nice to her.”

The trial hinged on a videotaped confession Cheyanne Jessie made while being interviewed by two Polk County Sheriff’s Office deputies. After steadfastly denying that she knew where her father and daughter were, Jessie eventually changed her story amid increasingly aggressive questioning during the four-hour interrogation.

After admitting she had killed her father, Cheyanne Jessie claimed she acted in self-defense and said her daughter had been accidentally slashed as she and her father grappled with a knife.

Cheyanne Jessie eventually told the deputies where to find Weekly’s and Meredith’s bodies in a shed on the South Lakeland property where Weekly rented a house. Jessie also gave them a key to a lock on the shed.

Autopsies determined that both were shot in the head at close range — Meredith once and Weekly three times. The Polk County Medical Examiner’s Office also determined that Weekly was stabbed at least 12 times in the chest.

An autopsy found that Meredith was stabbed at least four times in the back of the neck.

The verdicts showed the jury accepted the argument of Assistant State Attorney Paul Wallace that Cheyanne Jessie killed Weekly and Meredith in a desperate attempt to salvage her relationship with her then-fiance, Matthew “Cody” Munroe. Wallace said Munroe had separated from Jessie and threatened to “divorce” her because of her chaotic relationship with Meredith.

Testimony showed Cheyanne Jessie had asked her father to take custody of Meredith and had researched the prospect of giving the girl up for adoption. Jessie, who lived in North Lakeland, delivered Meredith to her father’s house on July 18, 2015, in the hope that he would take custody of the girl.

But Wallace said Munroe had not viewed any child pornography. He said doctors and counselors who talked to the girl in her final months detected no signs she had been sexually abuse