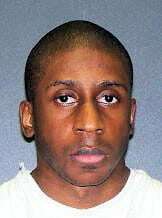 A man who was sentenced to die in the fatal beating, stabbing and strangling of an East Texas call center supervisor more than a decade ago, displayed a pattern of obsession and violence that a former district attorney said indicated the potential of a serial killer.

Mario Swain has since filed two unsuccessful appeals and the U.S. Supreme Court has refused to review his case. Swain, 33, is scheduled for execution Thursday.

Worried friends alerted police when Lola Nixon didn’t show up for dinner two nights after Christmas in 2002. Officers discovered signs of forced entry at her home near Dallas – and blood throughout – but no sign of the 46-year-old woman. Neighbors said they had seen a truck parked outside the night she went missing, and police traced that vehicle to a man who said his grandson, Swain, had borrowed it.

Swain gave several confessions, and said his friends had beaten Nixon while burgling her home. But those friends all had credible alibis.

Eventually he led detectives to Nixon’s body, in the backseat of an abandoned vehicle at a remote site in Gregg County. She had been beaten with a tire iron, stabbed and strangled.

“Unless you knew where you were going, you wouldn’t get there,” Lance Larison, a prosecutor at Swain’s 2004 trial, said.

Evidence indicates Nixon fiercely resisted the attack and that Swain left her bleeding in her bathtub before throwing her in the back of her BMW and driving her to the site where she was found. He then returned to her house and tried to clean up.

The tire iron was recovered from a trash container where Swain said he had thrown it. Prosecutors said Swain used Nixon’s credit cards and that he gave a piece of her jewelry to a friend.

Nixon’s blood was found on Swain’s clothing in the truck, along with her car keys and garage door opener

At trial, prosecutors presented evidence and witnesses that showed a pattern of crimes: Swain gathered information about women he wanted to rob, then attacked them, forcing them to inhale the anesthetic halothane and hitting them over the head with a wrench or shooting them with a stun gun.

“Not only did he stalk, he started making physical assaults,” Larison said.

“Girlfriends told us he loved to watch detective shows, crime science shows, that he was fascinated by them,” he said. “He would keep lists of women’s cars and certain license plates.”

He was “a serial killer in training,” the prosecutor said

Earlier this year, a federal appeals court rejected Swain’s appeal that argued his confessions to the slaying should not have been allowed at trial, that his lawyers were deficient and that there was a problem in jury selection. The U.S. Supreme Court three weeks ago refused to review Swain’s case. And last week the Texas Court of Criminal Appeals refused an appeal challenging an investigator’s trial testimony.

Nixon was unmarried and lived alone. She had been a supervisor at a telephone call center in Longview where Swain once worked.

Swain declined from death row to speak with reporters as his execution date neared.

His lethal injection would be the 13th this year in Texas, where two more executions are set for next week.