Jurors have found Patrick Haney Jr. guilty of first-degree murder in the beating death of his girlfriend’s 4-year-old son.

Haney, of Point Marion, Fayette County, could face the death penalty in the death of 4-year-old Trenton St. Clair, the child of his former girlfriend, Heather Forsythe. He was also convicted of endangering the welfare of children.

“I couldn’t be happier. It’s been too long. Trenton is finally going to lay in rest. No more doubt in his mind that the guy that did this is punished now. The truth is out,” the boy’s paternal grandmother, Sharon Smitley, said.

During closing arguments Tuesday, just 26 hours after the trial opened, prosecutors passed around autopsy photos to jurors. They depicted St. Clair’s bruised body on the autopsy table. “I did get a glimpse of the pictures. That was so bad. Really upsetting,” said Smitley.

Smitley’s son Joseph St. Clair is Trenton’s father. He is currently living in Georgia with his girlfriend and their child.

The boy’s tearful mother was the first witness to take the stand Monday against Haney.

Forsythe struck a plea deal to lesser charges last week in return for her testimony. She told the jury she saw Haney beating her son, leaving bruises all over him, but said she didn’t speak out because she feared Haney. Under her agreement to plead guilty to endangering the welfare of a child, Forsythe could get a sentence ranging from two and a half to five years.

Prosecutors maintain the beating was systematic and went on for weeks inside the couple’s home.

Pennsylvania State Police Trooper James Pierce testified that during questioning, Haney at first claimed the boy was clumsy and had fallen down steps, fallen from a desk and fallen from a park draw bridge.

Pierce testified that when Haney was confronted with the mother’s claims and with word that doctors reported the child was a victim of abuse, Haney dropped his head and appeared to cry. The trooper testified that Haney then admitted to hitting the child because “he wouldn’t listen sometimes.” Pierce said Haney told him he was trying to discipline the boy, not hurt him.

When testimony resumes Tuesday on the second day of the trial, a doctor who treated St. Clair in the emergency room of Ruby Memorial Hospital in Morgantown, W.Va., will testify.

The same jury will return to Judge Nancy Vernon’s court Wednesday morning when the sentencing phase opens. Jurors will then hear more testimony and closing arguments before deliberating if Haney should be sentenced to life in prison or the death penalty. 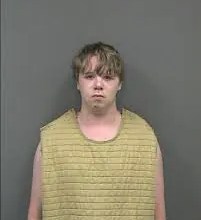