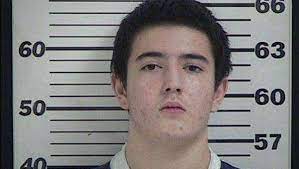 Sixteen-year-old Preston Cato Phelps on Wednesday pleaded guilty to malice murder in return for a life prison sentence for the brutal slaying of his father at their Talahi Island home.

Phelps, who was 14 at the time of the killing in September 2012, also pleaded guilty to charges of domestic violence-aggravated assault, and tampering with evidence.

He received a 10-year probated sentence on the aggravated assault charge to be served in addition to his life prison sentence.

As part of his agreement with the state, Preston Phelps cannot refuse to testify “truthfully and fully” at his mother’s trial, Chief Assistant District Attorney Greg McConnell told Walmsley.

Thomas Phelps, 64, was found slain Sept. 2, 2012, inside the garage at the family’s home at 130 Nilsson Drive on Talahi Island. Judith Phelps’ sister, Debra Turner, alerted police after she saw the victim’s body in the garage that night.

McConnell told Walmsley the victim suffered more than 100 separate injuries including stab and chop wounds and blunt force injuries, including those from a pipe hatchet or ax among “four or five different weapons.”

The plea bargain came in the face of a possible sentence of life plus 52 years in prison. Court-appointed defense attorney David Burns said after court that Phelps’ main reason for accepting the plea and sentence was to avoid the additional years in prison had he been convicted on all charges.

Phelps must serve at least 30 years in prison before he becomes eligible for parole, Burns said, and then will be on lifetime parole.

At Burns’ request, Walmsley made a condition of the sentence that Phelps get credit for time served since his September 2012 arrest.

The defendant, wearing an orange Department of Juvenile Justice jumpsuit, told Walmsley he was entering the guilty plea voluntarily.

McConnell told the court Judith Phelps’ sister, Debra Turner, went to the Phelps residence on Sept. 2, 2012, and, after seeing the body, Preston told her, “‘I’m sorry, Aunt Debbie, I snapped,'” according to the prosecutor.

At the house, Turner was directed by Judith Phelps, who she said appeared to be drunk, to the garage where Turner found the victim’s body, McConnell said.

An hysterical Turner then called Bloomingdale police to report the slaying. Savannah-Chatham police arrived to find blood oozing from under the garage door and when no one answered their knocks at the door, broke in, McConnell said. They found a knife and pipe hidden in the yard.

Both defendants were found leaving the bedroom inside the home after police forced their way in after no one responded to knocks on the door. Police found evidence hidden in the bedroom.

Among the charges against Preston Phelps were that he assaulted his father with a knife and metal pipe and used an ax to chop the victim in the back of the head. Both defendants are charged with cutting the fingers from Thomas Phelps’ left hand to obstruct prosecution, applying a torch to his body and burying the knife in the backyard.