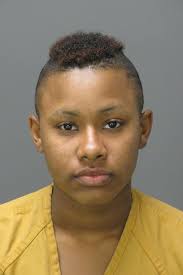 A teenage girl from the small town of Kathleen, Ga., was sentenced to life in prison this weekend after she pleaded guilty to killing her 12-year-old sister and setting fire to her family’s house in hopes of covering up the crime.

Carmen Collins, now 18, initially denied she had killed her sister, but reportedly admitted her guilt to her attorney two weeks ago. She pleaded guilty to malice murder and arson for the July 2012 crimes, according to the Telegraph of Macon. Superior Court Judge Edward Lukemire sentenced her to life in prison. She will be eligible for parole in 30 years.

Prosecutors said the girls’ parents had left the house when India caught her sister packing her things to run away. India tried to stop Carmen from leaving and threatened to call their parents. Carmen then got her father’s .40-caliber handgun, chased her sister through the house and ultimately shot her six times. Five of the shots were in the back, while final shot was fired as Collins stood over her sister.

Then, according to the prosecutor, Carmen Collins retrieved two gas cans from a shed, poured the gasoline around the house and set it on fire with the intention of making it look like her sister had been killed in the blaze. She fled in a car with the family dog to Columbus, where she was arrested two days later.

“This situation is a no-win, unbearable situation for these parents,” Hartwig told the judge. “They have basically lost both of their daughters. Our thoughts and prayers go out to these parents. This is a horrible situation.”

The Telegraph reports that the girls’ mother, Angela Collins, wept through much of the hearing. Prior to the sentencing, she spoke to the judge and smiled at her daughter as she walked past the defense table. She said while Carmen had run away a couple of times she was respectful and had never been violent.

“Our girls were very close,” Collins said. “They loved each other. … We look forward to the day Carmen is back with us, and we still love her and always will. We will love her and support her through any and everything.”

Collins was also charged with felony murder, possession of a firearm during the commission of a crime, burglary and auto theft, but those charges were dropped with her guilty plea to murder and arson.