To the neighbors in the Davie trailer park where he lived, he was Edward Edmond, a standoffish man who paid his rent on time and kept to himself.

To CFT Construction, where he earned $8.50 an hour, he was Kenneth Cooper, a carpenter.

But to the FBI, he was Ralph Edward Birdsong, accused of killing two people and wounding six others in a drug-related Philadelphia shooting rampage.

Birdsong, who lived in Broward County for two months before he was arrested by the FBI, was ordered held without bail by a U.S. magistrate in Fort Lauderdale on Wednesday. Magistrate Lurana Snow said that Birdsong should be turned over to state authorities, then extradited to Philadelphia to face charges.

Birdsong, 29, who was taken to federal court in shackles, wore gray sweat pants, work boots and a red shirt at the brief hearing.

He was arrested by the FBI on Monday, shortly after he returned from his job at CFT Construction. Birdsong said in court that he used a driver’s license- type card from Georgia as identification when he applied for the job.

CFT Construction officials could not be located for comment.

The arrest of Birdsong and his girlfriend, Jill St. Clair, 24, stunned Twin Lakes Travel Park residents, who said the two maintained a low profile and appeared to be just another young couple. They lived in a 1976 Winnebago at the park, and neighbors said both went to work daily.

“They just came off the street,” the manager of the trailer park said. “When they first got here, they stayed one day, then left and went to the Keys, and then they came back and said they decided they wanted to stay on. He wasn’t mean looking or anything.

“They paid their $322 rent on time each month, and they were never, never a problem. He would come into the office every day to check his mail and pick up some milk or beer,” said the manager, who requested her name be withheld.

On Tuesday, St. Clair, who fled drug charges in Philadelphia, also was ordered held without bail by a federal magistrate. She was to be turned over to Pennsylvania authorities.

Irene Block, who lived next door to St. Clair and Birdsong, described the couple as “anti-social.”

“I said good morning to him twice. That was it,” Block said. “They never even came out for a cup of coffee.”

Birdsong is charged with killing the two people and attempting to kill another six in a Philadelphia house on July 17. Of the six people who survived the shooting spree, four were shot, one was severly beaten and another was beaten and raped, Philadelphia police said.

The shooting spree began, they said, when people in the house were freebasing cocaine and started a fire. The house was damaged and nine pounds of cocaine were destroyed.

“It’s the theory of the Philadelphia Police Department that this was (Birdsong’s) revenge” for the fire, FBI Agent Robert Risner testified in court.

In court testimony, Birdsong said he has four children and that he fully owns one house and several duplexes in Philadelphia. A federal public defender was appointed to represent him, however, because he said he has only about $200 in the bank.

The manager of Twin Lakes Travel Park said she suspected nothing when the two came to live there, but in the future will be more cautious.

“You can’t very well ask someone if they are wanted,” she said 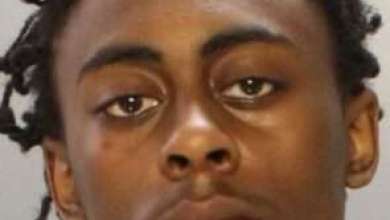