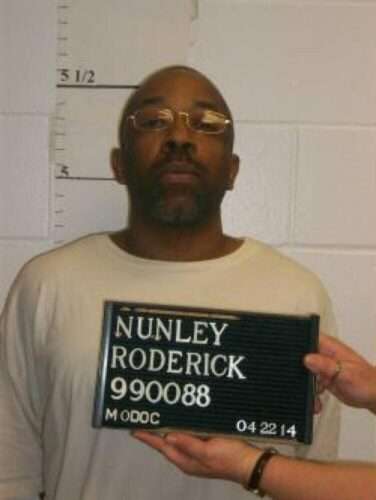 He was put to death by lethal injection Tuesday at the Eastern Reception, Diagnostic and Correctional Center in Bonne Terre for the 1989 murder of 15-year-old Ann Harrison.

Nunley’s lethal injection began at 8:58 p.m., and he was pronounced dead at 9:09 p.m., according to the Missouri Department of Corrections.

O’Connell also said Nunley declined to use a sedative before being given pentobarbital, the drug used for executions in Missouri, and that there were no complications.

Ann Harrison’s family did not provide a statement after the execution, which was witnessed by an uncle and two family friends.

Tonight, as we remember Ann Harrison, our thoughts and prayers are again with Bob and Janel Harrison, and the other members of Ann’s family. The acts of violence that took this 15 year old who was full of life and promise away from her loved ones can never make sense to us. The two men who were found guilty of Ann’s kidnapping, rape and murder have now had their sentences carried out. But even as there is judicial closure tonight, we know that a Missouri family will always miss and grieve the young woman who has been gone for more than 26 years. We grieve with them. So, I ask that Missourians join me in keeping the family of Ann Harrison in their thoughts and prayers tonight.

“Roderick Nunley murdered 15-year-old Ann Harrison in 1989, pled guilty, and was sentenced to death. Despite openly admitting his guilt to the court, it has taken 25 years to get him to the execution chamber. Nunley’s case offers a textbook example showing why society is so frustrated with a system that has become too cumbersome.”

Pete Edlund is a retired Kansas City police officer who led the investigation into Harrison’s death.

Nunley’s attorney, Jennifer Herndon, has not responded yet to requests for comments.

After deliberate consideration of its merits and the facts of this case, I have denied this petition. As Governor, this is a power and a process I do not take lightly. Each instance involves a very specific set of facts, which must be considered on its own. On the morning of March 22, 1989, 15-year-old Ann Harrison was waiting for the school bus at the end of the driveway of her Raytown home when she was abducted, raped, and then stabbed to death by Roderick Nunley and Michael Taylor. The capital punishment sentence given to Taylor for his role in these brutal crimes was carried out last year. Nunley also pleaded guilty to these heinous crimes and was sentenced to death. My decision today upholds this appropriate sentence. I ask that Missourians remember Ann Harrison at this time and keep her parents, Bob and Janel Harrison, and the Harrison family in your thoughts and prayers.

Updated 9/1/2015, 5:43 p.m. — The U.S. Supreme Court has denied a stay of execution for Roderick Nunley, who’s scheduled to die by lethal injection at Missouri’s Bonne Terre prison as early as 6 p.m. tonight.

Nunley was sentenced to death for the 1989 murder of 15-year-old Ann Harrison in the Kansas City area.

This is a developing story and we’ll have more details as they come in.

Pending a stay or clemency, Roderick Nunley will become the sixth death row inmate executed in Missouri this year and the 18th since the state resumed executions in November 2013.

Nunley was sentenced to death for the 1999 kidnapping, rape and murder of 15-year-old Ann Harrison in Kansas City. He was charged along with Michael Taylor, who was executed last year.

According to police reports and court documents, Nunley and Taylor had been using cocaine the night of March 21, 1989, and then stole a car during the early morning hours of March 22.  They saw Ann Harrison standing in her driveway waiting on a school bus. When they pulled up to her, Taylor grabbed her, pulling her inside the car.

Nunley then drove to his mother’s house in Grandview, a suburb of Kansas City, where Harrison was taken blindfolded into the basement. He said in court that Taylor raped Harrison while he did nothing to prevent it, and that they both later agreed to kill her to prevent her from testifying against them in court.

Harrison was stabbed multiple times and left in the trunk of the stolen car to die. Both the car and her body were discovered three days later in a nearby neighborhood.

Nunley pleaded guilty to first-degree murder in 1991, in the hopes of receiving a life sentence, but after a three-day sentencing hearing he was sentenced to death.

In 1994, Nunley filed a motion to withdraw his guilty plea, which was rejected. His attorneys had argued that he suffered from a “dependent personality disorder” and that his judgment was impaired due to his cocaine use when Harrison was murdered. They also accused the Jackson County prosecutor’s office of having a track record of racial discrimination when pursuing the death penalty in cases where the defendant was African American and the victim was white.

Late Friday, the Missouri Supreme Court rejected Nunley’s request to withdraw the execution warrant, and a motion on Monday to reconsider that decision was also rejected.

Meanwhile, Nunley’s attorney, Jennifer Herndon, has filed another appeal based on the state’s refusal to disclose where it gets its execution drug, although that maneuver failed to halt other executions carried out in Missouri this year. The Marshall Project, which has put forth several articles critical of the death penalty, recently had an article that was critical of Herndon.

Nunley’s window of execution is scheduled to begin at 6 p.m. Tuesday night.