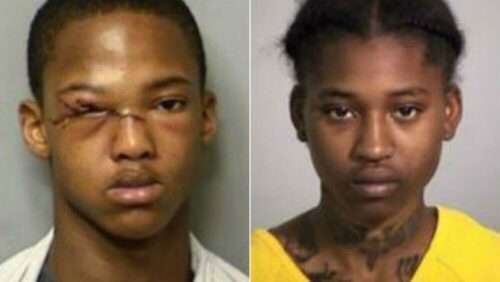 Zion Smith was sixteen years old when he and a friend went on a crime spree in Indiana that would leave one person dead and four others hurt. According to prosecutors Zion Smith, upper left, and eighteen year old Jaquisha Love would go on a crime spree that only lasted a few hours however one person would be murdered and four others would be shot. Zion Smith would be shot in the head and lose his right eye. Both of the teen killers would be found found guilty and sentenced to prison for over a hundred years.

Two Indianapolis teenagers were convicted Friday in connection with a violent, hours-long crime spree that left one person dead and four others seriously wounded.

Zion Smith, then 16, and Jaquisha Love, then 18, were charged with one count of murder, five counts of attempted murder and one count of robbery after, police say, they terrorized the Near Eastside in the overnight hours between July 18 and 19, 2016.

Police were first called around 12:15 a.m. on July 19 to the 3300 block of Robson Street. There, officers found 18-year-old Dayren Staten shot to death in the driver’s seat of a Kia Rio. Another victim, Valencia Standberry, was found critically wounded in the passenger’s seat

While still on scene, police were approached by a young women who said she had been robbed an hour earlier by a boy she knew as Zion and a woman she knew as Jaquisha Love. She told police that Zion demanded she give him her handgun, and that when she refused he started firing at her. One of the bullets passed through her jacket and shirt, but didn’t strike her.

Three hours later, police were called to the 1400 block of North Wallace Avenue on a report of a person shot. There officers found a man lying in the living room of a home with a gunshot wound to the stomach. He was transported to the hospital in serious condition. Two other gunshot victims were found inside the house and also taken to the hospital

The victims told police they’d received a knock on the door from a young man and woman matching the description of Zion Smith and Jaquisha Love. They said when they opened the door, the young man started shooting.

One of the people inside the house told police he was able to fire back at the shooter with a revolver. He said that when he did he saw the gun fall out of the shooter’s hands.

At that scene, evidence technicians recovered a Smith & Wesson 9mm pistol, a S&W .45-caliber pistol, a S&W .357-caliber revolver and a Mossberg 12-gauge shotgun. The 9mm had been reported stolen two days prior.

Within 45 minutes police received yet another  call, this one reporting a person shot in the 4000 block of East 12th Street.

Officers arrived to find a 16-year-old who identified as Zion Curry suffering from an apparent gunshot wound to the eye. The teen was later determined to be Zion Smith. A young woman, Jaquisha Love, was with him at the time.

Based on their investigation and witness testimony, police arrested Smith and Love on preliminary charges of robbery and murder.

Forensic analysis eventually matched Smith’s fingerprints to the door of Staten’s vehicle and to the .45-caliber S&W pistol.