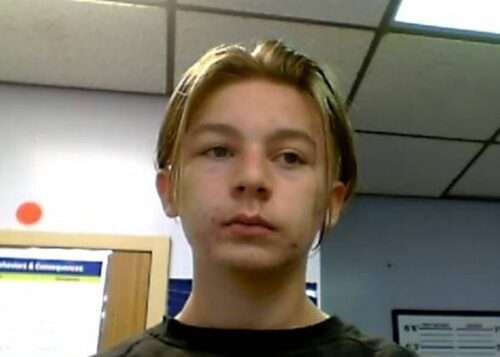 Aiden Fucci has been formally charged in the murder of Tristyn Bailey. Aiden Fucci who is fourteen years old has been arrested and charged in the brutal murder of thirteen year old Tristyn Bailey who was stabbed more than a hundred times. Aiden Fucci made his first court appearance today, June 3 2021, and was initially charged with second degree murder however that was later upgraded to first degree murder, the fourteen year old plead not guilty. Tristyn Bailey who was a popular cheerleader at the  Patriot Oaks Academy where Aiden was also a student. Tristyn body would be found in a wooded area.

Classmates, friends and family members gathered for a candlelight vigil Monday night in honor of a 13-year-old cheerleader whose body was found in the northeast Florida woods.

Sheriff’s officials said in a news release on Tuesday that a 14-year-old boy fatally stabbed Tristyn Bailey, and left her body in a wooded area in the community where they both lived.

The suspect made his first appearance in court earlier Tuesday, via a Zoom call which his parents were also on. A judge ordered him held on a second-degree murder charge for 21 days. State attorney’s officials told the judge they would likely have a decision by then on whether he will be tried as an adult.

Tristyn was last seen early Sunday morning at the community center in the Durbin Crossing community south of Jacksonville. The two teens attended nearby Patriot Oaks Academy, where Tristyn was a cheerleader.

Tanya White, one of her cheer coaches, remembered the teen’s “beautiful smile and presence.”

“She always was the first to hug me,” White said at Monday night’s vigil. “She was officially my favorite.”

Flowers and notes to Tristyn and her family were left outside the community center where she was last seen.

Her parents reported her missing around 10 a.m. on Sunday and a neighbor found Tristyn’s body in a heavily wooded area that evening, St. Johns County Sheriff Rob Hardwick said during a news conference on Monday afternoon. Hours later, investigators made an arrest.

“The community helped us solve this case,” Hardwick said.

According to an arrest report, video surveillance from the community center showed the girl walking with the teen shortly after 1 a.m. Sunday. Another video from a nearby home showed the pair walking along a road about 1:45 a.m. The same video showed only the teen walking in the areas at 3:27 a.m., the report said.

Around 6 p.m. Sunday, a neighbor found the girl’s body in a wooded area, the sheriff said. She had significant head injuries and other trauma, the arrest report said.

The videos led the detectives to talk to the teen. The girl’s body was found close to the boy’s home, the report said.

Dive teams searched a lake on Monday, near where her body was found, Jacksonville’s FirstCoast News reported. A crime scene truck also was seen at the home of the teen charged with killing her. The arrest report said detectives found evidence related to the clothing seen in the surveillance videos in the boy’s bedroom. And some of the items had a presumptive positive result for the presence of blood, the report said.

The Associated Press does not generally publish the name of juveniles charged with crimes unless they are charged as adults.

Newly released documents include 14-year-old Aiden Fucci’s plea of not guilty to the charge of first-degree murder of 13-year-old Tristyn Bailey.

Aiden Fucci has pleaded not guilty to the charge of first-degree murder, according to new documents released Thursday.

The plea came ahead of a scheduled June 10 felony arraignment, and will effectively cancel it. A pretrial date has instead been set for July 28.

By entering a written plea, Fucci’s public defender is able to waive his client’s appearance at an arraignment, which may be part of the rationale for the new filing in the high-profile case.

The 14-year-old St. Johns County teen, accused of stabbing a 13-year-old classmate to death, will be tried as an adult.

According to police, Fucci stabbed Tristyn Bailey 114 times. The case was in initially reported as a missing persons case, and Fucci was questioned in that investigation. Police say he told investigators he got into a fight with Tristyn and pushed her forcefully to the ground where she hit her head. Detectives later allegedly found blood on clothes at Fucci’s Durbin Crossing home and his knife in a retention pond.

Investigators say the medical examiner found the broken tip of the knife lodged in Tristyn’s skull.

Aiden Fucci was initially charged as a juvenile with second-degree murder, but on May 27, a grand jury indicted him for first-degree premeditated murder, which automatically moved the case into adult court. That means he could spend the rest of his life in prison if convicted. He is currently being held at the Duval County Jail, apart from the adult inmate population.