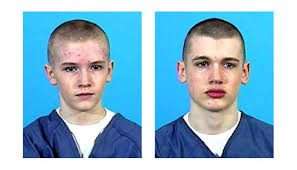 Alex and Derek King were a pair of brothers from Florida who would make international headlines when they beat to death their father with a baseball bat. According to court documents the two teen killers who were aged twelve and thirteen at the time of the murder were being manipulated by a known sexual predator Rick Chavis who had convinced the boys to get rid of their father so they could be with him. On the night of the murder the two boys would fatally beat their father to death using a baseball bat and then would set the home on fire.

Alex And Derek King Other News

After two trials in which the prosecution presented different accounts of the same killing, a jury today convicted 13-year-old Alex King and 14-year-old Derek King of murdering their sleeping father in November and setting their house on fire to cover up their actions.

A separate jury acquitted Ricky Chavis, a 40-year-old family friend, who was tried for the same killing of the boys’ father, Terry Lee King. Mr. Chavis is said to have been sexually obsessed with Alex.

The age of the boys and the nature of the crime brought extensive attention to the case from the beginning. But the prosecutors’ approach greatly increased the attention and brought criticism from legal experts, who said it was rare to conduct separate prosecutions for a crime that only one defendant or set of defendants could have committed.

David Rimmer, the assistant state attorney who prosecuted both cases, was under a court order of silence during the trials. But today Mr. Rimmer said that his office brought both cases because the boys confessed to the crime before recanting before a grand jury and saying they were covering up for Mr. Chavis.

Mr. Rimmer said that it was up to the juries to decide which version of the events was accurate and that they did so today.

”I felt there was enough circumstantial evidence that he motivated and influenced them,” Mr. Rimmer said of Mr. Chavis. ”The boys said he was the perpetrator, but the jury rejected their testimony. They didn’t believe it.”

The jury in the Kings’ trial deliberated nearly five hours before finding the brothers guilty of second-degree murder and arson. The boys, who were 12 and 13 at the time of the killing and were being tried as adults, had faced first-degree murder charges.

By convicting the brothers of a lesser offense, the jury of three men and three women spared the Kings a mandatory sentence of life in prison without parole. Instead, the boys, who are to be sentenced on Oct. 17 before Judge Frank Bell of Escambia County Circuit Court, face sentences of 22 years to life in prison.

”The jury gave them every break they thought they could give them,” Mr. Rimmer said.

The brothers also face sentences of 30 years in prison for the arson conviction.

”They were devastated,” said Greg King, the victim’s brother and the boys’ uncle. ”The judgment was the first time they realized the weight of what was going on.”

Mr. Chavis wiped away tears after the verdict was announced. ”He was greatly relieved,” said Mike Rollo, Mr. Chavis’s lawyer.

Mr. Chavis still faces charges of lewd and lascivious acts upon a minor and accessory to murder after the fact. Mr. Chavis has pleaded not guilty to those charges.

Members of the King family were stunned by the Chavis verdict and angrily bolted from the courtroom after it was announced.

”I’m disappointed to have the adult manipulator set free yet have the abused children in prison,” Greg King said. ”But that’s our justice system.”

Felons convicted in Florida typically serve about 85 percent of their sentences, said Judge Bell, who presided over both trials. He could decide to sentence the King brothers to less than the 22-year recommended minimum sentence if he can show a ”clear and compelling case” to reduce it, Mr. Rimmer said.

In closing arguments on Thursday in the King trial, the prosecution told jurors not to be swayed by sympathy for Derek, who is accused of wielding the bat, and Alex, his baby-faced younger brother who, prosecutors said, planned the murder.

The case has riveted people here since the two boys were arrested on charges of bashing their 40-year-old father in the head with a baseball bat and setting their house in nearby Cantonment on fire. The brothers said they did that because they feared being punished for running away and also wanted to live with Mr. Chavis. Alex said he was in love with Mr. Chavis.

Even after the verdicts were in, criticism of the prosecution continued.

Mr. Rollo said his client never should have been tried. ”The juries rejected the testimony of the two co-defendants as having no merit and being untruthful,” he added.

Yale Kamisar, a professor of law at the University of Michigan, was highly critical of the prosecution, saying: ”The prosecution in this bizarre case has given both defendants reasonable doubt. It’s ridiculous to charge two parties separately in the same case.”

The King brothers’ case is the third in less than two years in which juveniles have been tried as adults in murder cases in Florida.

A jury convicted 13- and 14-year-old brothers Friday of murdering their sleeping father with a baseball bat in an unusual case in which an adult friend was acquitted of the crime under a completely different prosecution theory.

The older brother, Derek King, bowed his head as the verdict was read, while Alex King wiped away tears as his attorney draped an arm around his shoulders. Their mother wept softly in the courtroom gallery behind them.

The boys, who were tried as adults, each face 22 years to life in prison on the second-degree murder charge alone. They were also convicted of arson for trying to burn down their home around the battered body of Terry King, 40.

A short time later, a separate jury announced that a family friend, Ricky Chavis, had been acquitted of first-degree murder and arson during a trial last month. The verdict was reached last week and sealed pending the outcome of the boys’ trial.

The boys’ taped confessions to sheriff’s deputies were played for jurors during Chavis’ trial.

The brutal crime, the ages of the two boys and the odd prosecution strategy had riveted much of Florida.

Prosecutors admitted in court that their case against Chavis was weak, and some legal experts questioned the decision to try both the boys and Chavis on first-degree murder charges for the same crime. Prosecutors argued in one trial that Chavis wielded the bat; they argued at the other trial that the boys who did it

Prosecutors said the boys wanted to escape their controlling father and live with Chavis, a 40-year-old convicted child molester who allowed them to play video games, stay up late watching television and smoke marijuana when they went to his house after running away from home 10 days before the killing.

The boys confessed the day after the Nov. 26 slaying, but recanted months later and pinned the crime on Chavis. Soft-spoken Alex said the boys initially took the blame because they wanted to live with Chavis and he had told them they would be exonerated
because they are juveniles.

Defense lawyers said the boys confessed to protect Chavis and were coached by him on what to say. That included such gory details as being able to see their father’s brain through a hole in his head and the raspy sound of his last gasps.

The boys’ attorneys also argued that Chavis had motive because he wanted to keep Terry King from finding out he was having sex with Alex.

Prosecutor David Rimmer said that the boys were telling the truth the first time, and that their confessions included details only the killer would have known.

The boys sat at different tables with their lawyers as they awaited the verdict. Derek rocked slightly in his chair and stifled yawns, while Alex chatted with his attorney.

After the verdict, both sat in silence, with Alex struggling to hold back tears.

At Chavis’ trial, prosecutors put the boys on the witness stand, where they said they hid in the trunk of his car while Chavis killed their father. The house was set on fire. The boys were 12 and 13 at the time.

Rimmer, however, avoided asking the Chavis jury for a conviction, saying the only reason the case came to trial was that the boys had lied — either when they told authorities they killed their father or to jurors when they said Chavis did.

He said it was up to the jury to decide, adding: “I don’t have a dog in this fight.”

At the boys’ trial, however, prosecutors said it was Derek who swung the bat while Alex urged him on.

Defense lawyers asked Judge Frank Bell to acquit the boys because of the competing theories of the crime, but the judge refused.

Christopher Slobogin, a University of Florida law professor, and Mark Seidenfeld, associate dean at Florida State University’s law school, said prosecutors should have decided who they thought was guilty and taken that case to trial.

“It’s on the verge of being unethical that they would pursue contradictory theories when they are relatively sure that the evidence points to one as opposed to another defendant,” Slobogin said.

But Slobogin also said there would have been nothing unconstitutional about having contradictory verdicts, and they could have been upheld on appeal.