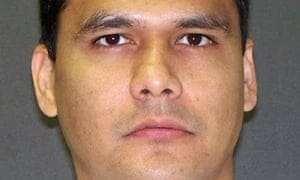 Death row inmate Arnold Prieto, convicted 20 years ago of a brutal attack with a screwdriver that left three San Antonio residents stabbed to death, has been executed.

He was pronounced dead by prison officials at 6:31 p.m., 20 minutes after he was injected with a lethal dose of the sedative pentobarbital. In a brief final statement Prieto, 41, said “there are no endings — only beginnings.”

“Love y’all, see you soon,” he also said, noting moments later that he could smell the drug. “Woah,” he added as he took his last conscious breaths.

Prieto spent Wednesday morning taking pictures with his mother and was given a last meal of barbecue chopped beef, carrots and pinto beans with tea or water, according to prison officials.

He has asked his sister, two friends and a spiritual adviser to be in one of the death chamber’s two observation booths as the execution took place. In the other booth, spots were reserved for four sons and a daughter-in-law of victims Virginia Rodriguez, 62, and Rodolfo Rodriguez, 72.

Prieto is the only one of the three men arrested in 1994 to have received the death penalty for the capital murders of the Rodriguezes and Paula Moran, 90.

Brothers Jesse and Guadalupe Hernandez — grand-nephews of the Rodriguezes — were also initially implicated. The murders were committed one day before Jesse Hernandez’s 17th birthday so he wasn’t eligible for the death penalty. He’s serving a life sentence.

Guadalupe Hernandez, originally labeled by police as the mastermind of the robbery-turned-triple-slaying, had all charges against him dropped. Prosecutors at the time cited a lack of evidence and called his release unfortunate.

In a statement to police, Prieto said the trio, who lived in the Dallas suburb of Carrollton, met in the summer of 1993 and were heavy cocaine users. It was the idea of Guadalupe Rodriguez, he told police, to drive to San Antonio in September of that year to rob a rich uncle who ran a check-cashing business out of his home in the 1100 block of West Mistletoe Avenue.

They snorted cocaine the whole way there and arrived in the middle of the night, Prieto said. Virginia Rodriguez, he recalled in the five-page statement, invited them in and made them a breakfast of eggs, tortillas and orange juice.

After they ate, Guadalupe Rodriguez stabbed his aunt repeatedly with a screwdriver, Prieto told police. Prieto did the same to Rodolfo Rodriguez and Jesse Hernandez stabbed Moran — a family friend and former nanny to the Rodriguez children —when she came out of her bedroom, according to Prieto’s statement.

Jesse Hernandez also gave a statement to police in which he said it was Prieto who had committed all the murders.

Guadalupe Hernandez never gave a statement, but prosecutors offered Prieto a plea deal to testify against him in exchange for two 30-year sentences.

He declined the offer.