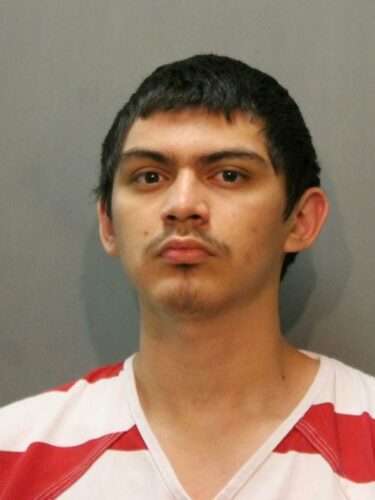 Carlos Quevedo was a seventeen year old from South Dakota who would murder a store clerk during a robbery. According to court documents when Carlos Quevedo entered the store and was caught stealing beer he would attack the clerk and fatally stabbed the employee to death. This teen killer was arrested and convicted of the murder and sentenced to ninety years in prison and must serve forty five years before he is eligible for parole

A teen who murdered a Rapid City store clerk last year was sentenced Thursday to 90 years in prison at the end of an emotional, daylong hearing.

Carlos Quevedo, 18, showed no noticeable reaction upon hearing his sentence. Quevedo earlier apologized to the victim’s family and told the court he would accept his punishment for repeatedly stabbing 45-year-old Kasie Lord during a beer theft at the Loaf ‘N Jug on Mount Rushmore Road.

Quevedo said he couldn’t remember the attack, having blacked out after ingesting a mixture of vodka, marijuana, cough tablets and soda laced with cough syrup. He was then 17 years old, just finished high school and was planning to join the Air Force.

His crime, second-degree murder, carries a penalty of life in prison without parole, but the U.S. Supreme Court ruled in 2012 that the penalty can’t be applied to juvenile offenders.

In a hearing that lasted seven hours and involved a dozen witnesses, Pennington County State’s Attorney Mark Vargo argued for a prison term of 100 years; defense attorney Randy Connelly asked for 40 to 45 years.

Judge Heidi Linngren, of the 7th Circuit Court, cited points that both sides made before pronouncing Quevedo’s sentence around 4:45 p.m. Thursday.

Quevedo decided to start stabbing Lord in the back while she was trying to wrench away a case of beer from Cody Grady, Quevedo’s companion at the Loaf ‘N Jug that early morning of Jan. 18, 2017. Grady was sentenced Wednesday to 7-1/2 years for robbery.

The court heard Lord telling Quevedo, in a 911 call she placed when the robbery started: “He (Grady) got the beer. Stop it.”

Using expletives, he told Lord to shut up — a phrase the judge said Quevedo heard his dad tell his mom when beating her up.

When Lord backed out of the store, Quevedo decided to follow her till they both disappeared from the view of security cameras. The video showing the robbery and assault was played in court Thursday, eliciting tears from family members of both Quevedo and Lord.

Police found her lying in the store parking lot, gasping for air and bleeding out. Her body bore 38 stab wounds, excluding defensive-type injuries in her hands.

From the testimony of Quevedo’s mother, Alisia Quevedo, the public learned for the first time Thursday the dysfunction that characterized his childhood.

His mom and dad used meth on a weekly basis. His dad was in and out of jail on drug violations. He watched police arrest his parents at home. His dad routinely abused his mom, including holding a gun to her head, and saw her with bruises and broken bones. He had to take care of his three younger siblings.

“I’m so sorry … realized that I’ve been high his whole life,” Alisia Quevedo said from the stand in a testimony punctuated by sobs. “Now I just think that I’m the most horrible person ever.”

Did Quevedo murder Lord because he was under the influence of alcohol and drugs – including cough medicine known to affect short-term memory and trigger hallucinations? Or, the judge asked, because he has known nothing but violence all his life?

Ultimately, Linngren said, she has to protect the community from the level of violence Quevedo has shown he is capable of: killing an innocent person.

“There is no way to predict his actions,” Linngren said. “I have a responsibility to the public to make sure that does not happen again.”

Quevedo will be eligible to apply for parole at age 62, after serving half of his sentence. This would be 45 years, which Linngren said was equivalent to Lord’s age at her death.

As people began leaving the Pennington County Courthouse before its doors shut at 5 p.m., Alisia Quevedo’s wails and sobs filtered down from the third floor.

An inmate who committed murder at the age of 17 has been denied a shorter prison sentence.

Carlos Quevedo stabbed a Rapid City convenience store clerk to death during a robbery in January 2017.

He appealed his 90-year sentence to the South Dakota Supreme Court.

In an opinion made public on Thursday, July 23, the high court upheld the sentence that allows Quevedo a chance at parole when he’s 62.