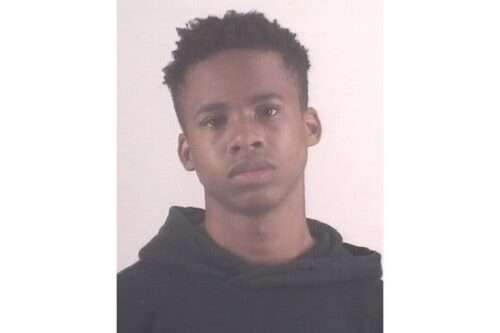 Taymor McIntyre who is better known by his stage name Tay-K had a promising rap career however due to poor choices that is most likely over. Taymor McIntyre was just sentenced for being part of a murder in Texas that took place during a home invasion. Now Tay-K needs to stand trial for another murder he allegedly committed while he was running from the authorities. Taymor McIntyre received a fifty five year sentence for the original charges and most likely will receive a life sentence if this teen killer is found guilty of the second murder.

Due to Taymore McIntyre is still waiting his second trial for murder he has yet to be entered into the database for the Texas Department of Criminal Justice.

Taymor McIntyre AKA Tay-K Other News

A jury in Fort Worth has sentenced teen rapper Tay-K to 55 years in prison for the 2016 murder of a father during a home invasion.

Taymor McIntyre, aka Tay-K, was convicted of murder last week in the home invasion shooting death of Ethan Walker.

Taymor McIntyre was sentenced to 55 years for the murder along with 30, 13 and 13 years for three counts of aggravated robbery. The sentences will be served concurrently.

The courtroom was full for closing arguments Tuesday morning. Prosecutors pushed jurors to consider Taymor McIntyre’s character, including his run from the law after being arrested in 2017, and his behavior in jail since he was captured.

Taymor McIntyre’s defense team portrayed him as a teenager trying to make it on his own. They also told jurors there was no principled way they could sentence him to more than the 20-year sentence offered to Meagan Holt, a teenaged girl who participated in the crime and testified during the trial.

Taymor McIntyre raised his profile in 2017 with the song “The Race,” where he rapped about running from a case he could not beat.

“Every lyric to ‘The Race’ is stained with my son’s blood. Every ‘Free Tay-K’ shirt that was ever sold has my son’s blood on it,” the victim’s father, Richard Walker, said.

Taymor McIntyre will have to serve more than 27 years before he has a chance to get out of prison.

He still faces another capital murder charge in San Antonio, which happened while he was on the run in 2017.

Taymor Travon McIntyre, 19, who goes by the name Tay-K, had been charged with capital murder in the death of 21-year-old Ethan Walker. A Tarrant County jury found him guilty Friday of the lesser charge of murder, as well as one count of aggravated robbery for the shooting and robbery of another man.

He was sentenced to 30 years on one of the robbery counts and 13 years on each of the other two, and ordered to pay a total of $21,000 in fines. The sentences will be served concurrently.

“He has a chance. Let’s not throw him away,” he said. “He is worthy of redemption.”

Prosecutors pointed to McIntyre’s brash behavior both in and out of custody and argued that he enjoyed the infamy from Walker’s slaying.

“Your verdict puts a price on a human life,” prosecutor Bill Vassar said, according to the Star-Telegram. “When you come out here and you read that verdict, you are telling this family what their son’s life is worth.”

McIntyre was among seven people charged in Walker’s slaying, which took place at a home where police had previously performed drug investigations. Authorities believed the robbery was drug-related.

His attorneys argued that McIntyre was unarmed during the robbery and did not know that Walker would be killed.

“The plan was robbery, not killing,” Kearney told the jury.

But prosecutors said McIntyre recruited the gunman, Latharian Devante Merritt, for the home invasion and knew that he was “trigger-happy.”

“He knew what the risks were when he got into this,” prosecutor Jim Hudson said.

Merritt, 25, was found guilty of capital murder in 2018 and has appealed the verdict.

After his arrest in the home-invasion case, McIntyre was on house arrest in March 2017 when he cut off his ankle monitor and fled to San Antonio, authorities say.

He also found time to release his song “The Race,” which made the U.S. Billboard Hot 100 list and brags about evading arrest.

McIntyre faces an additional charge of having a prohibited item in a correctional facility after officials reported finding a cellphone hidden in his underwear at the Tarrant County jail. He later tweeted a photo of himself in the jail with the caption “Live From the Gates of Hell #FreeMe.”

Authorities also have said that McIntyre tried to start a gang while behind bars.