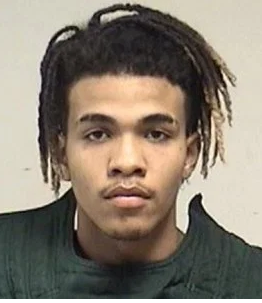 Martice Fuller was convicted in the murder of his ex girlfriend Kaylie Juga in Wisconsin. According to court documents Kaylie Juga had ended her relationship with Martice Fuller after he became physically abusive towards her. Martice Fuller would force his way into her home and shoot the fifteen year old teen and her mother. The mother would survive the shooting and identify Martice Fuller to police. This teen killer is set for sentencing on May 21, 2021

“Kaylie Juga was controlled, was hurt, was stalked, was murdered by this defendant,” Kenosha County District Attorney Michael Graveley said in his closing argument.

Prosecutors said Fuller broke into her family’s home and shot Juga and her mother.

Juga’s mother survived and later identified Fuller as the killer.

“She will never forget. There are some memories that are burned into your brain forever. She sees his face. She hears his voice. She sees the gun being leveled at her chest every day,” Kenosha County Deputy District Attorney Angelina Gabriele said.

In closing arguments, Fuller’s attorney argued that because Kaylie’s mom was so traumatized at seeing her daughter killed and being shot herself, she wasn’t a reliable witness.

“She was going through terrible things that day. I cannot even imagine. But I also know when I’m going through unimaginable things, and scared and frantic and panicked, that I’m not at my best,” attorney Carl Johnson said.

Juga, then 15, was a Bradford High School cheerleader and honor student.

A judge paused Fuller’s trial last year amid accusations Fuller tried to tamper with the jury.

Fuller sobbed after the verdict was read.

He faces a mandatory life term when he’s sentenced May 21.

It is not yet known whether he’ll ever have a chance at parole.

Kaylie Juga’s parents were joined by dozens of relatives and friends at the trial but declined to comment afterward.