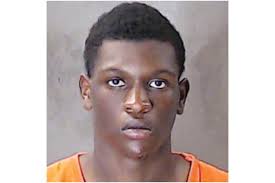 The man who killed a six-year-old boy after firing off dozens of rounds in a Decatur neighborhood will spend his life behind bars.

Meshon Williams, 18, pleaded guilty to a number of charges, including felony murder and aggravated assault in court on Friday.

All this was related to a May 2018 incident.

Williams fired at least 31 rounds into a house on Sweetgum Lane, shooting and killing 6-year-old Z’Mari Mitchell, who was inside the home.

A detective revealed evidence Tuesday in the case of Meshon Williams, the 17-year-old accused in the death of a 6-year-old boy allegedly stemming from a social media feud.

Sgt. Lynn Shuler of DeKalb County police said the teen drove five girls to the victim’s home on May 5 so they could fight the child’s sister over something she posted on Instagram. The detective didn’t say what the post said.

Seeing that the fight wasn’t fair, the victim’s mother and father came out of the home near Glenwood Road to break it up. The five girls and Williams told police they got back in the SUV to leave when they saw the father with a gun, according to the testimony.

Several houses down the road, the SUV stopped and witnesses saw Williams get out with a Glock handgun, which had an extended magazine, and fire 31 shots toward the home. Two bullets hit the house, including the one that struck Z’Mari Mitchell in the head, leading to his death, Shuler said.

Speaking with police, Williams later said he fired because he heard shots coming from the house. But even the girls he’d driven to the home said gunshots came from the Mitchell residence only after Williams began to unload his clip.

The only one of the girls who supported Williams’ statement is dating him, Shuler said.

Another officer testified about a separate case in which Williams is accused of recklessly driving a stolen car through an apartment complex parking lot a few days before the shooting. He allegedly slammed the car into a police officer’s cruiser and nearly hit the cop before speeding away and eventually fleeing on foot.

After the testimony, the court found probable cause for the cases against Williams, who is held without bond on charges including murder, to proceed.

Williams’ mother, who didn’t give her name, said she didn’t want to comment after the hearing, other than to say she was saddened by the 6-year-old’s death.