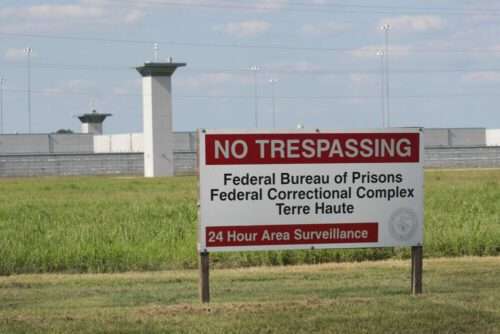 Richard Jackson was sentenced to death for the kidnapping, sexual assault and murder of a woman on Federal land. According to court documents Richard Jackson grabbed the victim, Karen Styles, as she was hiking through the Pisgah National Forest in 1994. Karen Styles body would be found weeks later and the woman was duct taped to a tree. Evidence would show she was sexually assaulted, tortured and finally shot. Evidence left at the crime scene would lead police to a nearby Kmart where a receipt would bring the police to Richard Jackson. Richard would be convicted and sentenced to death. As of 2021 Jackson remains on Federal Death Row

On Halloween morning, October 31, 1994, Karen Styles, a recent college graduate, disappeared from a trail in the Pisgah National Forest.   A search initiated that evening, after Styles failed to return home, revealed no trace of Styles herself.   Her car was, however, still parked at the lot at the head of the trail, and her car key was found on the trail two-tenths of a mile from the parking lot.

A little more than three weeks later, Styles’ nude body was discovered by a hunter, duct-taped to a tree, where investigators also found a duct-tape wrapper, a pornographic magazine, and one spent Remington .22 caliber rifle casing.   An autopsy revealed that Styles died from a single bullet wound to the head.   She also had suffered ten stun-gun wounds to her body, nine of them inflicted within six inches of her pubic area.   Investigators recognized from the duct-tape wrapper that the brand was sold at K-Mart.   When sheriff’s deputies contacted the nearest K-Mart store, located approximately one mile from the murder site, they discovered a receipt for a transaction that occurred on October 28, 1994, evidencing the purchase of a .22 rifle, a box of Remington .22 rifle ammunition, duct tape, a flashlight, and batteries.   The ATF Form 4473 generated upon the purchase of the rifle revealed the purchaser to be Richard Allen Jackson.

On December 20, 1994, Richard Jackson voluntarily accompanied police to the Buncombe County Sheriff’s Department for an interview.   After the officers advised Jackson of his Miranda rights, Jackson waived them and answered questions for approximately three hours about his background and his whereabouts in the days surrounding the date of Styles’ murder.   When the sheriff asked Jackson what he did with the rifle that he used to shoot Karen Styles, Jackson responded, “I think I need a lawyer present.”   The sheriff then informed Jackson that he would not ask him any more questions and stated, “Son, I know you bought the rifle and the duct tape at K-Mart on the 28th of October.   I know you were in Bent Creek on the day she was killed, and that’s fine, but you need help.”   At this point Jackson broke down, crying and insisting that he did not mean to kill anybody.   After the officers informed Jackson that he did not need to say anything because he had invoked his right to counsel, Jackson stated that he wanted to tell the whole story to get it off of his chest.   He then signed another waiver of his Miranda rights.

Richard Jackson confessed fully.   He stated that he arrived at the park around 8:00 a.m. and watched Styles as she stretched and walked down the trail.   After sitting for a while, he took the gun out of the back of the car, loaded it, and started down the trail.   He also had duct tape, a stun gun, and a pornographic magazine in his coat pockets.   After Karen Styles passed him on the trail, Jackson turned around and pointed the gun at her, whereupon Styles took a key out of her shoe and told Jackson that there was money in her car and that he could take the car.   She pleaded with him not to hurt her.   Richard Jackson placed duct tape over Styles’ eyes and mouth and led her to a remote area, where he stood her with her back to a tree and duct-taped her to the tree.   The duct tape on Styles’ mouth had come loose by this time, and Styles again asked him not to hurt her.   Jackson taped her mouth shut again, ripped off her shorts and underpants, and then raped her vaginally.   Although Jackson’s rendition did not describe his use of the stun gun, evidence was presented at trial that he shocked Styles with a stun gun once above her left breast and several times in the pubic area.  Richard Jackson stated that he then moved away from Styles and looked at his pornographic magazine while masturbating.   The tape over Styles’ mouth loosened, and Styles began screaming.   Jackson walked up to her, put the gun to her head, and shot her once.   That afternoon, Jackson went back to the K-Mart, returned the gun, and received a refund.

Richard Jackson was crying during his entire confession, and the report of his confession indicates that at times during the interview the officers could not understand his words.   Jackson repeated many times that he did not mean to kill Styles.

A search of Jackson’s home and cars, conducted pursuant to a search warrant, led investigators to recover a functional stun gun, a flashlight, a black “Ninja” outfit, a wrapper to an adult magazine, and a partially empty box of .22 caliber rifle bullets.

Richard Jackson was charged in Buncombe County with first-degree murder, first-degree kidnapping, and first-degree rape.   After the trial court denied Jackson’s pretrial motion to suppress his confession, a jury returned a guilty verdict on all three charges.   On the jury’s recommendation, the court imposed the death penalty for the murder conviction and prison sentences for the rape and kidnapping convictions.