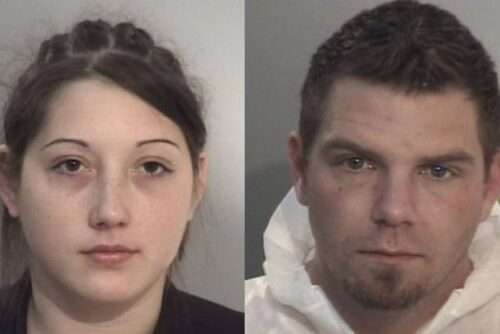 Terri-Lynne McClintic and her boyfriend Michael Rafferty were responsible for the murder of eight year old Tori Stafford a case that shocked Canada. Tori Stafford was leaving her school when she was approached by Terri Lynne who would be seen on video surveillance walking away with the little girl. Tori Stafford would be brought into a car where she would sit in the back seat of the car driven by Michael Rafferty. The couple would begin to drive away from the school, Rafferty had removed the battery from his cell phone so it could not be stopped. The car would stop three times before they ended up at the place where the horrors would take place. During one of the stops Terri Lynne would go into a hardware store where she would purchase a claw hammer and garbage bags.

When they reached their final location. Terri-Lynne McClintic would go for a walk while Michael Rafferty would sexually assault Tori Stafford. McClintic reportedly came back once and saw Rafferty still sexually abusing the nine year old girl. Terri-Lynne McClintic when she came back the second time would murder Tori by striking the little girl with the hammer. Tori Stafford body would be left in the woods wearing only her shirt.

This teen killer would be identified as the woman on the video and would be arrested over a month later where she would make a full confession. Terri-Lynne McClintic would initially be charged as accessory to murder however that would be upgraded to first degree murder, the highest charge in the Canadian justice system. Michael Rafferty would also be charged with first degree murder along with kidnapping and sexual assault.

The body of Tori Stafford would be found three months after she disappeared.

Terri-Lynne McClintic would plead guilty to murder and would be sentenced to life in prison with no chance of parole for twenty five years. Michael Rafferty would be found guilty of murder, kidnapping and sexual assault and would also receive a life sentence.

Terri Lyne McClintic And The Tori Stafford Murder Other News

Child killer Terri-Lynne McClintic is back in an Ontario prison after a brief and controversial stint in an Indigenous healing lodge, according to her victim’s father.

Rodney Stafford said on Thursday Terri-Lynne McClintic has transferred back to Grand Valley Institution for Women in Kitchener, Ont.

The “next step,” he said in a Facebook post, which CBC News confirmed, is getting McClintic into maximum security “where she rightfully belongs.”

Terri-Lynne McClintic pleaded guilty for her role in the 2009 kidnapping and killing of eight-year-old Tori Stafford.

She had been serving a life sentence at Grand Valley before being transferred to the Okimaw Ohci Healing Lodge for Aboriginal Women on Nekaneet First Nation in southern Saskatchewan.

News of the transfer prompted public outrage and a protest on Parliament Hill, led by Rodney Stafford

Correctional Service Canada (CSC) was ordered to review the case and announced changes to its transfer policies earlier this month.​ McClintic was then sent to the Edmonton Institution for Women, a multi-level facility with minimum, medium and maximum security wings.

CSC also said it will do a better job of keeping victims’ families informed about transfers.

Stafford said McClintic is in a medium security section at Grand Valley. Terri-Lynne McClintic is not eligible for parole until 2031.

Correctional Service Canada does not comment on the location of prisoners.

Terri-Lynne McClintic is already serving a life sentence after pleading guilty to first-degree murder in the death and is now testifying at Rafferty’s trial.

He has pleaded not guilty to first-degree murder, sexual assault causing bodily harm and kidnapping

Court has heard that Tori was killed on April 8, 2009, and that Terri-Lynne McClintic was arrested on another matter on April 12.

She says Rafferty came to visit her in the detention centre, worried that she would say something to police that would implicate him, but she told him she would take the fall for everything.

Terri-Lynne McClintic also says she wrote her recollection of the events of April 8 in a letter to her lawyer while in detention, including that Rafferty was the one who killed Tori with blows to the head from a hammer — but she testified in court this week that she did it.

The letter to her lawyer represented “what I wanted to be true, the truth that I wanted to believe,” she added. “That’s what I told myself was true. So that was the recollection of everything that had happened and everything was true up to the point of the murder.”

Terri-Lynne McClintic testified Tuesday that she abducted Tori outside her Woodstock, Ont., school at the urging of Rafferty, who wanted a “young female.” They drove more than 100 kilometres north to a rural area where he sexually assaulted the Grade 3 student, then Terri-Lynne McClintic used a hammer to kill Tori with blows to the head, she said.

Rafferty, wearing an ill-fitting three-piece suit, frequently smirked and muttered to himself throughout McClintic’s testimony.

McClintic’s name came up in tips almost immediately after Tori was reported missing, court has heard, and after police found out she had an outstanding warrant she was arrested May 12 for a parole violation. Rafferty visited her at the youth detention centre and she assured him she wouldn’t implicate him if police asked her about Tori, she said.

“I said that I would take the fall for everything, that I would say it was all me, that he had more to lose than I did,” Terri-Lynne McClintic said.

She further told him, “he had a life, a job, things going for him and I was just, I really had nothing,” court heard. “I said don’t worry about it, it’s OK. It’s OK. I’m just an 18-year-old junkie anyways.”

Rafferty told her, “you realize what that would consist of right?” and added, “I’ve always wanted conjugal visits.”

During another visit, the couple talked about Terri-Lynne McClintic running away from the detention centre, court heard.

“He said maybe we could be like the next Bonnie and Clyde,” she said.

Rafferty appeared to scoff Wednesday when McClintic said that and stared up at the ceiling, muttering to himself.

Terri-Lynne McClintic said she will never forget what Rafferty said to her the last time she saw him at the detention centre before she confessed to police and they were both charged in Tori’s death.

“I remember touching his face and…he looked up and almost, like, laughed at me and said, ‘You’ll do anything for a little bit of love, eh?’”

Earlier Wednesday, Terri-Lynne McClintic testified that Rafferty didn’t say much right after Tori’s death, “just that we should never speak of this again.”

Court heard the pair changed shoes, drove to a car wash in Cambridge, Ont., and dumped garbage bags that had the hammer Terri-Lynne McClintic says she used to kill the eight-year-old girl. Rafferty had a gym bag in his car with spare clothes, court heard.

“He switched shirts because his shirt had blood on it,” McClintic said, noting he kept the same pants as before.

Terri-Lynne McClintic changed into clothes Rafferty gave her, she said, and the old clothes were thrown out the window once they were back on Highway 401. She also cut parts out of the back seat and threw those out the window as well, court heard.

“There were two spots on the back seat that he couldn’t get clean and had to be cut out,” she said.

She and Rafferty met a few days later to discuss her alibi — she would say they went window shopping in Oakville, about two hours away from where Tori’s body was found, and stopped by a dance studio, Terri-Lynne McClintic said.

On Tuesday, McClintic’s first day of testimony included a disturbing telling of Tori’s last hours. She told the court that pent-up rage from her own childhood trauma caused her to kill Tori by attacking her with a hammer several times.

Terri-Lynne McClintic will go to trial this fall for allegedly assaulting an inmate at Kitchener’s prison for women.

The six-hour trial will be held Sept. 12 in Kitchener’s Ontario Court.

McClintic was charged with assault causing bodily harm after an alleged altercation at the prison with inmate Aimee McIntyre on Jan. 20. McIntyre is serving a life sentence for first-degree murder.

Terri-Lynne McClintic, 21, is also serving a life sentence for the murder of eight-year-old Victoria Stafford in 2009. She has no chance of parole for 25 years.

McClintic testified at the trial of her former boyfriend, Michael Rafferty, that she delivered the fatal hammer blows to the little girl.

She also talked about kicking and stomping on another female inmate during his trial.

Rafferty, 31, has pleaded not guilty to first-degree murder, sexual assault causing bodily harm and kidnapping in Tori’s death. His trial is winding down in London.

Her lawyer, Geoff Snow, said outside court that he expects prison staff will be among the witnesses at McClintic’s trial.

1 thought on “Terri-Lynne McClintic And The Tori Stafford Murder”