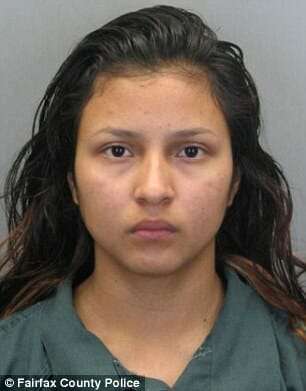 Venus Romero Iraheta and a number of MS-13 gang members would bring the victim to a park where she was interrogated about the death of the young man before she was beaten and stabbed repeatedly causing her death. Police also said that Venus Romero Iraheta would use the same knife to carve a tattoo, a memorial of the before mentioned young man, off the victims body. This teen killer would make a full confession to police and would be sentenced to forty years in prison

A 17-year-old Virginia girl allegedly killed a 15-year-old girl earlier this year by stabbing the victim in the stomach and neck 13 times, according to multiple reports.

According to The Washington Post, prosecutors alleged in court testimony Thursday that the suspect, Venus Romero Iraheta, used the same knife to carve away a tattoo on the skin of the victim, Damaris Alexandra Reyes Rivas. The tattoo memorialized a deceased alleged gang member with whom both girls had been romantically involved, prosecutors said.

Detectives alleged that Iraheta allegedly repeated her own name over and over again as she repeatedly stabbed Reyes Rivas on Jan. 8, according to the Post.

Venus Romero Iraheta, who will be tried as an adult following a ruling delivered Thursday, allegedly told Reyes Rivas that “she would see her in hell,” one law enforcement official testified, reports WUSA-9.

Iraheta is one of 10 suspects charged in Reyes Rivas’ death.

Police said Reyes Rivas ran away from her home in Gaithersburg, Maryland, on Dec. 10, 2016, after telling her mother gang members at her school had threatened her.

In court on Thursday, authorities alleged Reyes Rivas was picked up in a car and driven to Lake Accotink, where she was assaulted by a group of teens who made her stand in the snow without her shirt or shoes, according to NBC.

The body of Sosa Rivas was found on Jan. 12 along the Potomac River in Dumfries, Virginia.

The Post reports that police think Venus Romero Iraheta blamed Reyes Rivas for Sosa Rivas’ death, believing the teen girl had drawn him to his killers.

Authorities allege the group then forced Reyes Rivas to stand in the frigid waters of a river. NBC reports a detective testified Thursday that the group allegedly wanted the victim to experience the same pain Sosa Rivas had endured.

Days after the killing, police said Venus Romero Iraheta left her home in Alexandria after she herself allegedly received threats from gang members. She was arrested when she returned a month later.

WUSA-9 reports that several of the suspects who have been charged along with Iraheta for their alleged roles in Reyes Rivas’ death also appeared before a judge Thursday for preliminary hearings. In each case, probable cause was found, meaning their cases will be sent before grand juries.

A teen MS-13 gang member who once told her 15-year-old victim to remember her name “until the day we see each other in hell” was sentenced Friday to 40 years in prison for the brutal slaying.

But while Venus Romero Iraheta had once boasted to investigators about killing Damaris Reyes Rivas, her tone changed as she sobbed in court and begged for mercy.

“I would give my life to bring her back,” she said in court, according to WRC-TV. “I am sorry. I am so sorry.”

Reyes Rivas’ mother, Maria Reyes, said in court Friday her daughter’s murder had destroyed her life and devastated their family.

“My life is no life without my little girl. My girl is always on my mind, all the time,” she said according to the local news station. “All the time, I remember what this young girl did to my daughter.”

Despite Iraheta’s one-time assertion that she’d see the victim in hell, Reyes said her daughter, who she buried in her quinceañara dress, was in heaven.

“My daughter is not in hell, as she said. She’s in heaven. She has shown me that in my dreams. … Hell will be lived by you, not by her,” she said according to the Washington Post.

According to investigators, Damaris was lured to Lake Accotink Park in Fairfax County, Virginia, on Jan. 8, 2017 under the pretense of smoking marijuana, but when she arrived at the park she found 10 MS-13 gang associates who began to question her about the death of Christian Sosa Rivas, Iraheta’s boyfriend and an MS-13 associate who had been killed about a week earlier, the newspaper reports.

They took Damaris to several locations, at one point making her take off her shirt and shoes, and walk barefoot in the snow so she could feel the same cold Rivas felt when his body was dumped into the river.

The gang members accused Damaris of luring Rivas to his death and took video of themselves beating her before Venus Romero Iraheta climbed on top of her and demanded to know if she had slept with Rivas. Damaris said that she had and began to beg for forgiveness, but Iraheta would later tell Fairfax County detectives and an FBI agent that she left Damaris with haunting last words before she killed her.

“‘You’re going to remember me until the day we see each other in hell,'” she told investigators through a translator, according to The Post. “‘Don’t forget my name,’ and I told her my full name. … I told her to never forget who I was.”

She also reportedly sliced the victim’s tattoo off her body.

When investigators asked whether she felt remorse about the killing, she shook her head no.

But on Friday, Venus Romero Iraheta called the killing “the worst mistake of my life” and said the images from that day continue to torment her.

“At night, while I’m sleeping I will wake up with these memories,” she said, according to The Post. “They will come to me full force. I wish I could push them away.”

Venus Romero Iraheta is one of 10 defendants who has been convicted in the murder. Iraheta and Damaris had reportedly grown up just miles from each other in El Salvador.

Damaris’ mother had brought her to the United States to try to escape the violent gang life, The Post reports.