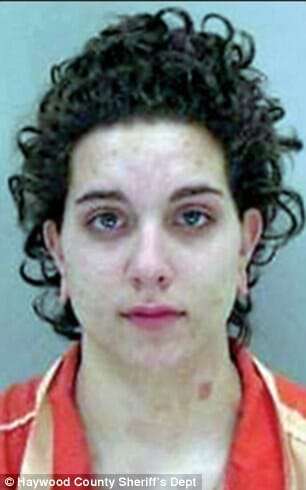 Crystal Brooke Howell, 20, appeared in court, where she was convicted of first-degree murder and concealment of death and failure to report a death not from natural causes, according to the District Attorney’s Office.

She received 60 to 84 months in prison for the second charge, followed by a minimum of 25 additional years for the murder charge before she can apply for a
parole hearing.

Howell shot her father, Michael Joseph Howell, 50, in the head with a shotgun while he was napping on Feb. 24, 2014. Michael Howell’s body was found by house guests about a month later on the family’s property in the Sheepback Mountain community near Maggie Valley.

His body had been placed inside a plastic container in the family’s storage shed.

Crystal Howell fled the state after she hid her father’s body and was found in Richmond County, Georgia. She was in possession of her father’s Land Rover and a U-Haul trailer full of items.

A young woman was sentenced to 30 years in prison after admitting she fatally shot her dad in their North Carolina home and hid his body in a shed for a month, during which time she drove his car and spent his money.

Crystal Brooke Howell, 20, pleaded guilty in Haywood County Court on Monday to concealing a death/failing to report a death not from natural causes and first-degree murder in the February 2014 killing of her father, sports editor Michael Howell, 50.

After shooting her dad in the head with a shotgun as he napped, the then-17-year-old girl hid his body inside a plastic container in the family’s storage shed on their Maggie Valley property and sold the shotgun used in the murder, officials said.

The teen then told friends her father had committed suicide and invited them to live in his home while she drove around in his car and burned through his cash, authorities said.

“She had her friends move in, had a drug-fueled party, and even had a stripper pole installed in the kitchen,” Haywood County Assistant District Attorney Jeff Jones said in a press release obtained by The Huffington Post.

Her friends discovered her father’s body on March 22, 2014 when they were moving a pinball machine into the shed, according to reports.

That same day, Howell showed up at the home of her mother, Kristina Rester, in Augusta, Georgia, with her father’s car and a U-Haul trailer filled with her belongings. She had asked Rester three days earlier if she could move back in with her, saying her father had released her from his custody, authorities said.

She was arrested the next day in Augusta at a Motel 6.

Prosecutors said Howell had thought about killing her father before pulling the trigger.

“The evidence in this case is that Miss Howell, who had just been caught shoplifting at Ingles by her father that day, came home and thought about killing her dad while she showered,” Jones said, according to WYFF. “Afterwards, she executed him while he slept on the couch.”

Howell’s attorney said her client had a history of mental health issues.

“I can tell you there is a lot more wrong with Crystal than has come out,” Howell’s aunt, Brenda Ellis, told the Columbia County News-Times, where Michael Howell served as a sports editor.

“There have been so many issues but they have compounded by all that she has been through over the years. She’s not a heinous monster. It is a heartbreaking tragedy, that’s all I know.”

But District Attorney Ashley Welch pointed to Howell’s actions as the real indicator of her motive.

“It’s shocking that a young woman kills her father,” Welch said, WYFF reported. “But the fact that Howell then began to spend her father’s money, use his house and drive his car – all after hiding his body and the evidence of her crime – that’s the motive. She wanted to live on her terms at the expense of Michael Howell’s life. It’s very sad.”

Howell will serve her sentence at the North Carolina Department of Adult Corrections.