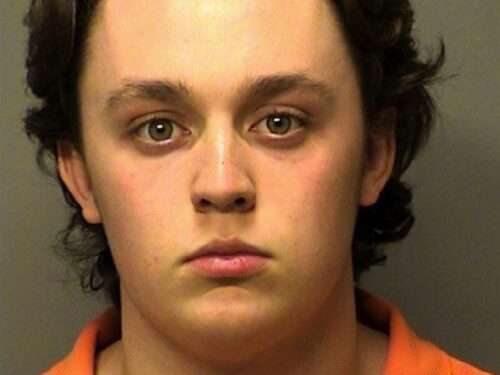 An Indiana man convicted of fatally shooting two teenagers during a drug-related robbery was sentenced to 179 years in prison on Tuesday.

Connor Kerner, 19, of Valparaiso, was found guilty Oct. 22 for the Feb. 25, 2019, murders of Thomas M. Grill Jr., 18, of Cedar Lake, and Molley R. Lanham, 19, of St. John, the Northwest Indiana Times reported. Kerner was 17 at the time of the murders, the newspaper reported. A jury took less than 4 1/2 hours to reach its verdict, convicting Kerner of two counts of murder, two counts of murder in the perpetration of a robbery, two counts of robbery and a single felony count of arson, the Chicago Tribune reported. The jury found him not guilty on a felony charge of intimidation.

Porter Superior Court Judge Roger Bradford, who handed down what he called a “de facto” life sentence, described the shooting and beating death of Grill as “one of the worst I’ve ever seen” and said Lanham’s execution-style shooting death was “almost Mafioso.”

Kerner, who showed no outward reaction Tuesday, said he plans to appeal the sentence, the Tribune reported.

“Unfortunately, there are no winners in a case such as this but it does provide justice to the families for the loss of Thomas Grill and Molley Lanham,” Porter County Chief Deputy Prosecutor Armando Salinas told the Tribune after the sentencing. “This was an outstanding investigation by the Porter County Sheriff’s Department and a victory for the community.”

According to a police report, Kerner allegedly told an informant he shot Grill in the Hebron-area garage of his grandparents’ home after Grill tried to rob him during a drug deal, the Times reported.

“Grill fell to the ground and was begging for his life,” the report stated. “Kerner advised that he panicked due to being out of bullets in the gun. Kerner then beat (Grill) with a pipe wrench until he died.”

Kerner then showed Grill’s body to Lanham, court records alleged. Kerner warned Lanham not to say anything about the death, and, as she turned to leave, shot her in the head, according to police.

Kerner loaded the two bodies into the trunk of the teens’ Honda Civic, using various containers of flammable liquids to set the vehicle on fire, the Times reported.

Patricia Grill, mother of Thomas Grill, spoke at the sentencing hearing and accused Kerner of attempting to erase her son and Lanham by murdering them and burning their bodies nearly beyond recognition.

“You erased your life, Connor,” Patricia Grill said. “You did that to yourself, Connor.”

Stacy Spejewski, Lanham’s mother, said in her comments to the court that she is still numb.

“I don’t know how to go on without her,” she said. “I am now the mother of a murdered child.

“Rehabilitation is not an option for you,” Spejewski told Kerner. “You are beyond evil.”

“Connor Kerner thought he could kill my sister and throw her away like garbage and walk away,” Lindsey Lanham said. “I’m sure she was so scared and so alone as she was killed senselessly by Connor Kerner.”

Kerner’s mother, Roxann Kerner, 47, of Chesterton, who was charged last month with attempting to cover up her son’s role in the crime, is scheduled to appear Wednesday before a county magistrate, the Times reported.

Connor Kerner was 17 when he killed Molley Lanham, 19, of St. John, and Thomas Grill, 18, of Cedar Lake, on Feb. 25, 2019, at his grandparents’ Hebron-area home after a drug deal went bad, then loaded their bodies into the Honda Civic they arrived in and set fire to the vehicle in a wooded area a couple miles away.

His mother, Roxann Kerner, called out, “I love you, Connor,” as sheriff’s deputies put him in handcuffs. He responded “I love you” to her before being led away.

Members of the Lanham and Grill families packed the courtroom and wept after the verdict. Chief Deputy Prosecutor Armando Salinas, Deputy Prosecutor Christopher Hammer and Porter County Sheriff’s Department Detective Sgt. Brian Dziedzinski, the lead investigator in the case, hugged family members at the end of the court session.

Members of the victims’ families sat outside the courthouse for the afternoon awaiting the verdict, hugging when they found out the news.

“On behalf of the family, they’re so grateful to the prosecutors for the thorough job that they did. They’ve been waiting a long time for justice in this case and this gets them one step closer to that,” said Tara Tauber, an attorney representing the Lanham family. “Nothing will ever bring her back but we definitely felt her presence today.

Molley Lanham loved butterflies, Tauber said, and a Monarch came by while supporters were waiting for word from the jury.

“Between that and the beautiful day we had, we feel very fortunate,” she said.

Defense attorney James Voyles declined to comment after the verdict. Fellow defense attorney Mark Thiros said they weren’t sure yet whether they would file an appeal.

The prosecution and the defense spent Thursday morning going over the credibility of key witnesses during closing arguments, leaving the jury to decide their believability and whether a co-defendant committed the crimes.

Bradford dismissed jurors around 12:20 p.m. for lunch and to begin deliberations.

Hammer credited Kerner’s ex-girlfriend, whom the Post-Tribune is not naming at the request of prosecutors, with going to police after Connor Kerner confessed the crimes to her and took her to the wooded area, before later threatening to kill her family and her if she told anyone.

Connor Kerner, Hammer said, admitted twice to his ex-girlfriend about the murders and the arson.

John Silva II, 20, of Hamlet, who has pleaded not guilty to two felony counts of murder in the perpetration of a robbery, remains in Porter County Jail without bond. Silva was charged May 22 with the alleged crimes and is awaiting the scheduling of a trial date.

The case, Hammer said, wasn’t about choosing between Kerner and Silva, who will have his own day in court.

Thiros picked apart the ex-girlfriend’s testimony, noting that even after his client confessed to her and threatened her, she continued to see him regularly.

“He hacked her social media. That’s the straw that broke the camel’s back, not that he killed two kids,” Thiros said.

As he did in opening statements, Voyles said Silva was responsible for the crimes.

He also questioned the robbery charges, over THC cartridges worth $20,000 to $50,000 that Grill was allegedly going to sell to Kerner. Kerner reportedly met late the night of Feb. 24, 2019, with Grill and Lanham about the purchase and arranged to meet the next day.

“Where were (the cartridges) when police began searching the Dye house (near Hebron)? Where was all that money?” Voyles said. “You have to have actual evidence that that was happening and there is no such evidence in this case.”

Grill’s father left the courtroom as prosecutors played the recording and his mother sat in court with her head down. Lanham’s family members also attended court and sometimes cried softly. Kerner’s mother, who testified during the trial, sat in the back row.

On the recording, Hammer said Grill can be heard saying, “I don’t have it.”

“He was trying to take something from Thomas that day and Thomas didn’t have it,” Hammer said.

Silva, Salinas said, was the backup guy, waiting with a gun owned by Kerner’s grandfather because he knows what’s going down.

He challenged the defense’s characterization of Kerner as a nice guy whose demeanor never changed as he met with his mother and grandparents in the days after the murders.

“Yeah, he was nice, he was polite, at Walmart, too, when he was buying all those flammables to burn the bodies of two people he just murdered,” Salinas said.

A convicted killer from Valparaiso is planning to appeal his long jail sentence.

Connor Kerner was convicted of killing two people in Lake County back in February of 2019. A jury found him guilty and in December of last year, a judge sentenced him to 179-years in prison.

It’s not clear what the ground for his appeal would be yet.

Investigators say Kerner murdered Thomas Grill and Molley Lanham two years ago. They say Grill apparently tried to rob Kerner during a drug deal, but when grill noticed he had no bullets in his gun Kerner beat him to death with a pipe.

Kerner then showed Grill’s body to Lanhan and told her not to say anything. But, when she turned away they say Kerner shot her in the back of the head.

They say Kerner loaded their bodies into the trunk of a car and then set the car on fire.