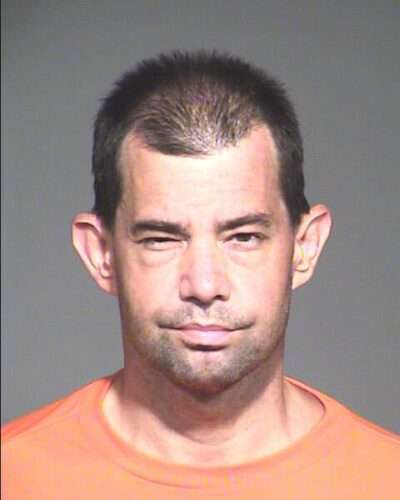 In December of 2002, the body of Ted Price was found shot to death on the Salt River Reservation near Mesa. In January of 2003 Gunches was pulled over by Arizona DPS Officer Robert Flannery near the California border. Gunches shot Flannery twice – luckily, one of the bullets was stopped by a bulletproof vest and the other deflected off Flannery’s wristwatch and he suffered minor injuries. Gunches fled and ultimately was arrested after a manhunt that included more than 50 officers. Bullet casings found near Price’s body matched the gun Gunches used to shoot Officer Flannery. Gunches pled guilty to the execution-style murder of Ted Price. At the penalty phase, Jennifer Garcia testified that she and Gunches were staying with Gunches’ girlfriend in Mesa when Price, who was the girlfriend’s ex-husband, came to visit. Gunches grew angry at Price and ordered Garcia to drive him and Price out to the reservation, where Gunches shot Price three times in the chest and once in the back of the head.

In November 2002, Ted Price visited his ex-wife, Katherine Lecher, in Mesa, Arizona. Price planned to stay at Lecher’s apartment while waiting for a school grant. After about ten days, the two began fighting and Lecher told Price to leave. The argument became increasingly heated and Lecher hit Price in the face with a telephone. Price remained conscious but appeared dazed and unresponsive.

¶ 3 Gunches came to the apartment that evening. After talking with Lecher, he asked her two roommates, Michelle Beck and Jennifer Garcia, to put Price and his belongings into Lecher’s car so Gunches could take him to the bus station. Gunches told Garcia to drive. Once at the station, Gunches said he did not have enough money for a bus ticket. He ordered Garcia to drive out of Mesa. Soon thereafter, he told her to turn onto a dirt path and to drive toward a dark, isolated desert area.

¶ 4 Garcia stopped the car. While Gunches was looking in the trunk, Price got out. Garcia then heard three popping sounds and saw Price fall to the ground; after hearing another popping sound, she saw Gunches standing by Price’s body with a gun at his side. Gunches got into the car, and Garcia drove back to Mesa, stopping once to dispose of Price’s belongings in a dumpster.

¶ 5 Price’s body was discovered several days later. After Price was identified, detectives interviewed Lecher, Beck, and Garcia. Beck said that Gunches told her that he had killed Price. While the investigation continued, Gunches was arrested in La Paz County for shooting at a law enforcement officer. He later pleaded guilty to attempted murder for that incident. The authorities matched the weapon used in the La Paz County shooting with projectiles recovered from Price’s body and projectiles and a shell casing recovered from the murder scene.

¶ 6 In October 2003, Gunches was indicted for the first degree murder and kidnapping of Price. Gunches was found competent to stand trial in November 2005 and competent to waive his right to counsel in November 2007. He subsequently pleaded guilty to both counts. Based on the La Paz County conviction, Gunches stipulated during the aggravation phase that he had previously been convicted of a serious offense under A.R.S. § 13-751(F)(2) (2010). The jury also found that Price’s murder was committed in an especially heinous or depraved manner, see id. § 13-751(F)(6). Gunches presented virtually no mitigation evidence during the penalty phase (an objection was sustained to the only question he asked his one mitigation witness), but requested leniency in allocution. The jury determined that he should be sentenced to death.