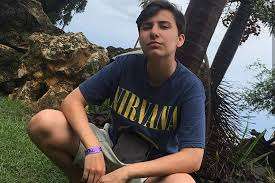 Alec McKinney (aka Maya McKinney) a transgender teen from Colorado would plead guilty to charges relating to a school shooting. According to court documents Alex McKinney and Devon Erickson would enter the STEM School Highlands Ranch opening fire which would end with one student dead and eight other injuries. Alex McKinney would eventually plead guilty to avoid a life sentence. This teen killer would be sentenced to life in prison anyway

A transgender teenager accused of opening fire with a friend in a Denver-area charter school in May to exact revenge on classmates who bullied him pleaded guilty on Friday to murder and attempted murder charges, prosecutors said.

Alec McKinney, 16, who has been held without bond since the May 7 rampage that left one student dead and eight others wounded, pleaded guilty to 17 criminal counts, including conspiracy and weapons charges, said Douglas County District Attorney George Brauchler.

Alec McKinney is accused along with Devon Erickson, 19, of carrying out the shooting at the Science, Technology, Engineering and Math (STEM) School in Highlands Ranch, Colorado.

An 18-year-old student, Kendrick Castillo, was fatally shot when he charged one of the shooters, police said.

The Colorado Public Defender’s Office, which represents McKinney said it does not comment on its cases outside court.

Erickson pleaded not guilty last month to 44 felony counts and is set to go on trial in May.

According to an arrest warrant affidavit, the pair armed themselves with three handguns and a 22-caliber rifle stolen from a gun safe owned by Erickson’s parents.

Both teens consumed cocaine before storming the school, the affidavit said.

Alec McKinney was born female and told police he was in a “pre-op transitioning phase,” and planned the shooting to get back at classmates who had bullied him for being transgender, according to court documents.

McKinney said he had enlisted Erickson to help him carry out the plot, police said.

In December, McKinney’s lawyers unsuccessfully argued to have his case transferred to juvenile court, arguing that he had a troubled childhood, including witnessing domestic violence by his father against his mother.

In denying that motion, Judge Philip Holmes said in a written order that while Alec McKinney “has experienced serious trauma in his life,” the alleged crimes were so serious that he should be tried as an adult.

McKinney, who is scheduled to be sentenced on May 18, faces a maximum sentence of life in prison with the possibility of parole after serving 40 years of his term because he was a juvenile when the crimes were committed.

Erickson, who was an adult when the crimes were committed, faces life without the possibility of parole if he is convicted of murder, or the death penalty if prosecutors decide to seek capital punishment.

The juvenile suspect in last year’s STEM school shooting in Highlands Ranch pleaded guilty in the case on Friday.

Alec McKinney had faced dozens of charges, including first-degree murder for the killing of Kendrick Castillo, an 18-year-old student who died in the shooting. Eight other students were wounded in the May 7 attack at STEM School Highlands Ranch.

In Douglas County court on Friday, McKinney pleaded guilty to more than a dozen felonies, including the first-degree murder charge, and one misdemeanor, according to a plea deal detailed in court. The remaining charges in the case would be dismissed under the deal.

The other charges included conspiracy to commit first-degree murder after deliberation, attempted murder after deliberation, attempted murder extreme indifference, conspiracy to commit arson, burglary and criminal mischief and possession of a weapon on school grounds. McKinney also pleaded guilty to a charge of second-degree assault for the two students who were mistakenly shot by a security guard in the response to the attack.

McKinney’s sentencing is scheduled for May 18. The mandatory minimum sentence for McKinney, 16, is life with the possibility for parole after 40 years, minus earned time. He faces up to a total of life in prison with the possibility of parole after 40 years, plus 407 1/2 years, according to the 18th Judicial District Attorney’s office. However, under a recent state law, McKinney, as a juvenile offender, could become eligible for parole under a special program after 28 years in prison, District Attorney George Brauchler said.

Because McKinney is a juvenile, he was not eligible for life without parole or the death penalty.

John Castillo, Kendrick Castillo’s father, said afterward Friday that the guilty plea “is what we were hoping for” but “no matter what happens in the courtroom, the results are the still the same.”