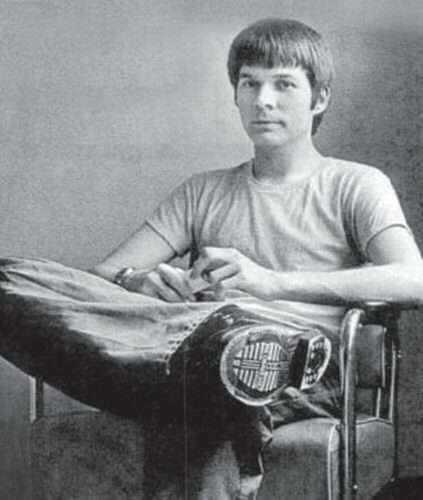 Arthur Frederick Goode III, the former Hyattsville resident convicted of killing a small boy in Florida and another in Fairfax County, died in the electric chair in Florida State Prison yesterday after tearfully apologizing to his parents and expressing remorse for what he had done.

Goode, 30, received the death penalty for the murder of 9-year-old Jason Verdow of Cape Coral, Fla., in 1976. Ten days after committing the crime, he raped and killed 10-year-old Kenneth Dawson of Falls Church, for which he received a life sentence in Virginia.

Goode had said in interviews and letters to the parents of his victims that he was proud he killed the boys and would continue to molest and kill if he were released. But as he was strapped into the electric chair at the state prison in Starke, his tone became somber

“I want to apologize to my parents,” he said, his voice trailing off and tears welling in his eyes. “I have remorse for the two boys I murdered. It’s difficult for me to show it.”

Goode was executed less than six hours after Elmo Patrick Sonnier, 35, was electrocuted in Angola, La., for the November 1977 killing of two teen-aged sweethearts abducted from a lovers’ lane.

Yesterday was the first time two persons have been executed on the same day since the Supreme Court reinstated the death penalty in 1976. Goode was the 18th person executed in the United States since 1976 and the seventh person executed this year.

Michael Dawson, whose son’s body was found March 20, 1976, in a wooded area near Tysons Corner, had requested “a front-row seat” at Goode’s execution but was turned down by Florida officials.

Dawson learned of Goode’s death at 7:30 yesterday morning while listening to the radio at his Falls Church home. He spoke with the superintendent of Florida State Prison, Richard Dugger, a few hours later.

“He told me it probably would have done me more harm than good to have been down there to witness it,” Dawson said. “But I don’t know. I lost something. I don’t have the words to express it, the hurt, but I feel a little bit better this morning.

“At least I won’t have to hear his mouth and see his mouth anymore running on the television,” Dawson said.

At the time of his conviction in Virginia, the state did not impose the death penalty. It has subsequently been reinstated.

The fathers of the couple killed in Louisiana were permitted to witness the execution of Sonnier at Angola State Prison.

Just before a black hood was pulled over his head, Sonnier turned to Godfrey Bourque, father of Loretta Bourque, 18, and to Lloyd LeBlanc, father of David LeBlanc, 16, and, staring at LeBlanc, said: “Mr. LeBlanc, I can understand the way you feel.

“I have no hatred in my heart,” Sonnier continued. “As I leave this world . . . I ask to have your forgiveness.” LeBlanc nodded and said “yes.”

Lawyers worked until almost the hour of execution for both men trying to get the sentences stayed, but the Supreme Court rejected last-minute bids for each.

Goode had treated his crimes cavalierly almost from the moment he was arrested, taunting the parents of his victims, conducting his own defense for the Florida killing, abusing his parents, who insisted that he was insane and worked tirelessly to prevent his execution, and frequently appearing on television as a self-styled expert on child molesters.

Prison officials said Goode wrote 10 to 15 letters a day, mostly to public officials and members of the news media because he was forbidden years ago to continue writing to the parents of his victims.

The Washington Post has received continuous correspondence from him since he was first arrested in Fairfax County in March 1976. His final letter to the Post is dated “3-29-84” and reads in its entirety: “Dear Editor, The Washington Post, Wash, D.C. Very Urgent! My ‘execution’ is scheduled for next week (4-5-84) and I demand it be carried out! Please arrange to come ‘interview’ me immediately. Sincerely Arthur F. Goode III 038781.”

As recently as Wednesday at a prison news conference, Goode had said he had no remorse for the killings, demanded to be executed and said his final wish was to have sex with a little boy.

Prison officials said that after Goode spoke with his parents for the last time just after midnight, he seemed to realize that, in Superintendent Dugger’s words, “This time there would be no last-minute stay. I think until then he really thought there would be.”

At 4:45 a.m. yesterday Goode ate a final meal of steak, baked potato, buttered cauliflower and broccoli, half a gallon of ice cream, and a dozen chocolate chip cookies.

Dugger led Goode to the electric chair and held a microphone to carry his last words to 12 witnesses.

“I’m very upset,” Goode said as he was strapped into the chair. “I don’t know what to say, really. How much time do I have?”

Dugger did not answer, and Goode then issued his apology.

A black gag was placed across his mouth and a hood was dropped over his face, and at 7:03 a current of 2,000 volts was sent through his body. His body jolted, his fists clenched, and then his body relaxed. He was pronounced dead at 7:08.

A funeral home in Florida said Goode’s body would be sent to Hyattsville for burial. Goode is survived by his father and mother, who live in Pine Island, Fla., and three older sisters.