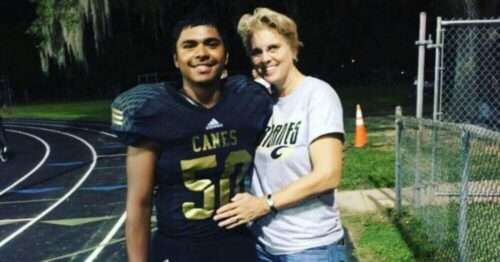 A Florida man has been sentenced to life after murdering his adoptive mother in her bed.

Nineteen-year-old Carlos Hallowell, who was 17 at the time of the murder, was found guilty of killing Denise Hallowell in their Inverness, Florida home, according to the Citrus County Chronicle. On July 13, 2019, Hallowell attacked his mother with an ax while she slept.

Because Hallowell was a minor at the time of the murder, he was not eligible for the death penalty.

“Although she’s not with us, I know she’s listening,” he said, according to the Chronicle. “Mom, I’m so very sorry. Words can’t describe how I feel right now, how much I miss you, how sorry I am for what I’ve done and everything I’ve done throughout my entire life with you. … I love you so much.

“Your Honor, the only thing I ask is for justice for my mom and mercy for me,” he said.

Denise adopted Carlos from Guatemala when he was 4 years old, according to the Chronicle. Beginning at age 11, Hallowell became dependent on alcohol and drugs, including experimentation with ecstasy, methamphetamines, and cocaine.

“The defendant chose, on his own volition, to begin taking increasing amounts of alcohol and a veritable witches’ brew of controlled substances,” said Citrus County Circuit Court Judge Richard Howard, according to The Chronicle.

After the murder, Carlos Hallowell told detectives that dogs barking woke him from a nap and he found his mother dying, according to the Citrus County Chronicle.

“Here we had a mother, who was brutally murdered in her bedroom during the night by her son,” Citrus County Sheriff Mike Prendergast said in a press release. “All the forensic evidence and interviews pointed to the only other person inside Denise’s home that night, her own son.”

In the subsequent investigation, divers searched a nearby lake and found Denise Hallowell’s iPhone and three security cameras taken from the home.

Though he initially denied killing his mother, Hallowell finally confessed to the murder. The teenager claimed his mother planned to cut him off financially when he opted to enroll in a technical college instead of a four-year school and verbally scolded him over his decision.

“That really hurt,” Hallowell told investigators, according to the Chronicle. “She let me have it, big time … telling me I’m a worthless piece of s–t because of what I want to do.”

Hallowell told investigators that he took the ax into his mother’s room and blacked out.

“I remember sharping [sic] the ax, and now, all of [a] sudden, it’s in the back of her head,” Hallowell said, according to the Chronicle. “It was kind of on the fly. … I didn’t intend for it to happen.”

At sentencing, Judge Howard referred to Hallowell as an “incorrigible offender” with no hope for rehabilitation.

“The defendant’s murder of his mother was not a result of any sudden outburst of emotion or aberrant thought,” Howard said. “Rather, it is and was the culmination of his desire to acquire his mother’s real state, cars, and other property.”

Howard said the attack was premeditated.

“The defendant took a long time to plan his attack … until [the] victim had taken a nap,” Howard continued. “All the while, quietly sharpening the ax in his room.”

The judge referred to the testimony of psychologists hired by both the state and defense, according to the Chronicle. He cited the expert witnesses’ findings that Hallowell met 16 out of 20 criteria required to determine psychopathy.

“There is no rehabilitation for a psychopath,” the judge said.