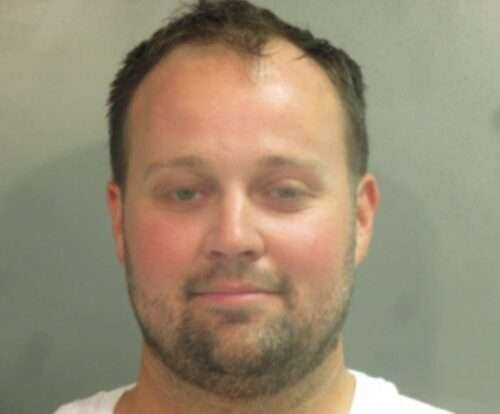 Josh Duggar is the latest celebrity to find themselves in court and convicted of some nasty charges. Josh Duggar who is known as Joshua Duggar from the reality television show 19 Kids And Counting first started showing up as a sexual deviant as he was let go from the Family Research Council when news came out that he may have molested a number of children under five years old when he was a teenager (14 to 15).

Josh Duggar would not face any charges as too much time had elapsed and that his father had taken him to see a Arkansas State Trooper Joseph Truman Hutchens. According to documents that four out of the five children he had molested were his own siblings. Apparently his parents put him into treatment for his behavior. Later that same Arkansas State Trooper would be sentenced to over fifty years in prison for child pornography.

A federal jury in Fayetteville, Arkansas, found the 33-year-old Duggar guilty on one count each of receiving and possessing child pornography. He faces up to 20 years in prison and fines of up to $250,000 for each count when he’s sentenced.

“We appreciate the jury’s lengthy deliberations, we respect the jury’s verdict, and we intend to appeal,” Duggar’s legal team said in a statement to NBC News.

U.S. Attorney for the Western District of Arkansas Clay Fowlkes said Thursday that more than 7 percent of the cases in his office involve child sex abuse images.

“This verdict sends the message that these cases are a top priority for our office,” Fowlkes said. “This verdict also demonstrates that no person is above the law. Regardless of wealth, social status, or fame, our office will continue to seek out all individuals who seek to abuse children and victimize them through the downloading, possession, and sharing of child pornography.”

Duggar pleaded not guilty to federal charges of receiving and possessing child pornography in Arkansas in April. Federal prosecutors contended that Duggar downloaded a Linux partition on the laptop to circumvent computer software that monitors internet use.

His activity was found in connection with an undercover investigation involving a file-sharing program, the U.S. Attorney’s Office said. Investigators geolocated the computer to Duggar’s car lot and then matched the timing of the image downloads to times Duggar was at the lot.

This includes times when Duggar was the “only paid employee on the lot,” the prosecutor’s office said in a Thursday press release.

Evidence presented to the court included logs of Duggar’s internet use, which included downloading the images, sending personal messages, and saving pictures.

Defense attorneys for Duggar denied the allegations during trial, saying someone else downloaded the images and that Duggar’s own personal devices were clear of any illicit material.

In the second week of his trial, Duggar’s family friend Bobye Holt testified that he confessed to molesting underage girls during a conversation in 2003, according to NBC affiliate KNWA.

Holt told the court Duggar had informed them that he touched multiple girls under their pants and underwear, according to KNWA.

Duggar’s defense filed a petition to strike Holt from the witness list in November, citing clergyman privilege. The filing stated that any statements allegedly made to Holt and her husband were made after Duggar’s father requested their spiritual advice.

Both Duggar’s father and Holt’s husband were elders in their church, according to the petition. Prosecutors opposed the request from the defense, saying in a separate filing that the Holts were among the family’s closest friends.

U.S. District Judge Timothy Brooks denied the request and ruled to allow evidence of previous molestation allegations against Duggar in the trial. Brooks said in his order that the prior allegations were “probative of defendant’s sexual interest in underage children.”

Duggar was featured in a reality show on the TLC network with his family called “19 Kids and Counting” that ran from 2008 and 2015. The show chronicled the lives of Jim Bob and Michelle Duggar and their 19 children, of which Duggar was the eldest, and often centered around the family’s religious beliefs as devout Baptists.

In 2015, following an In Touch magazine report that he was investigated for molesting his four younger sisters and a babysitter, Duggar released a statement saying he “acted inexcusably” when he was a teenager. An Arkansas police report indicated Duggar was investigated in 2006 when he was 18. He was never arrested or charged with any crime.

Also in 2015, following the apparent hack of the extramarital affairs website Ashley Madison, Duggar was revealed to have frequented the site. He released a statement following reports by The Hollywood Reporter and Gawker saying he was “so ashamed of the double life that I have been living” and apologized to his wife.

He checked himself into a rehabilitation center not long after, according to his mother’s blog at the time.

Jim Bob and Michelle Duggar said Thursday that “this entire ordeal has been very grievous,” and that their hearts and prayers are with anyone who has been harmed through child sex abuse material.

“As parents, we will never stop praying for Joshua, and loving him, as we do all of our children,” they said in a statement. “In each of life’s circumstances, we place our trust in God