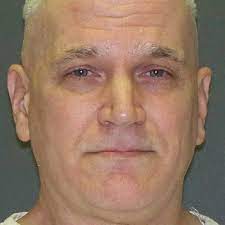 John David Battaglia went out with a joke and a grin

Battaglia, 62, offered no apologies and showed no remorse for killing his daughters at his Deep Ellum loft in 2001.

He seemed jovial, strapped to a gurney while witnesses arrived to watch his execution at the state’s Huntsville Unit.

As they filed in, he looked around and asked, “How many people are there? Oh, that’s a lot.”

The one-time accountant even said hello to his ex-wife, Mary Jean Pearle, who was there to watch him die.

He closed his eyes for several moments, and shortly after the lethal injection was administered, he looked at the chaplain at his feet, smiled and asked, “Am I still alive?”

Battaglia grinned and then sighed.

Battaglia was the third man executed this year in the nation, all in Texas, and the second killer from Dallas put to death this week.

His execution brought an end to a lengthy legal battle to spare his life. He was twice granted a stay so his mental competency could be evaluated, and his attorneys filed last-ditch efforts Thursday to delay the execution.

Battaglia received national attention in May 2001 after he gunned down his 9-year-old daughter, Faith, and 6-year-old Liberty at his Deep Ellum loft while their mother listened helplessly on the phone.

At the time, he was on probation for hitting his ex-wife, the girls’ mother, and she had been trying to have him arrested for violating that probation.

“Mommy, why do you want Daddy to have to go to jail?” Faith was told to ask her mother, moments before the girl begged for her life. “No, Daddy. Don’t do it.”

Last week, his attorneys filed a request for a stay of execution to the U.S. Supreme Court, saying that Battaglia did not fully understand why he was being put to death.

“Although he is aware of the state’s rationale for his execution, he does not have a rational understanding of it,” appellate attorneys Michael Mowla and Gregory Gardner wrote.

Battaglia, himself, said in a 2014 interview with The Dallas Morning News that he didn’t recall committing the crime and still considered the girls his “best little friends.”

In his Texas appeals, his attorneys wrote that Battaglia was “convinced that his trial and conviction were a sham” and that his death sentence was all part of a conspiracy involving “the KKK, child molesters and homosexual lawyers.”

On Thursday, one woman stood outside the prison unit with a pink poster board that bore a photo of John Battaglia and the words “Texas executes mentally ill.”

A state judge and the state appeals court, however, described Battaglia as highly intelligent, competent and not mentally ill. They argued he was faking mental illness to avoid execution.

Testimony at a hearing showed John Battaglia used the prison library to research capital case rulings on mental competence and discussed with his father the “chess game” of avoiding execution.

Court records show Battaglia’s attorneys argued that William Rayford, the other killer from Dallas executed this week, tried to sit up and jerked his head after the lethal drugs were administered.

Rayford’s execution was delayed for a couple of hours because of late appeals to stay his punishment.

But as Battaglia’s execution neared, his appeals were struck down one after another: The 5th U.S. Circuit Court of Appeals rejected an appeal that argued a lower court improperly refused his lawyers money to hire an expert to further examine legal claims he’s mentally incompetent for execution. Attorneys also took an appeal related to that issue to the Supreme Court. The high court, too, denied the complaint.

Pearle, the killer’s ex-wife and the mother of his victims, was at the Huntsville Unit on Thursday to witness his execution — almost 17 years after she listened to Faith and Liberty die and pleaded for them to run away from their father.

On Thursday, she leaned in as close as she could to the window separating the witnesses from the death chamber. Pearle watched as Battaglia’s breathing grew heavy and then stopped.

“I’ve seen enough of him,” Pearle said as she walked away.