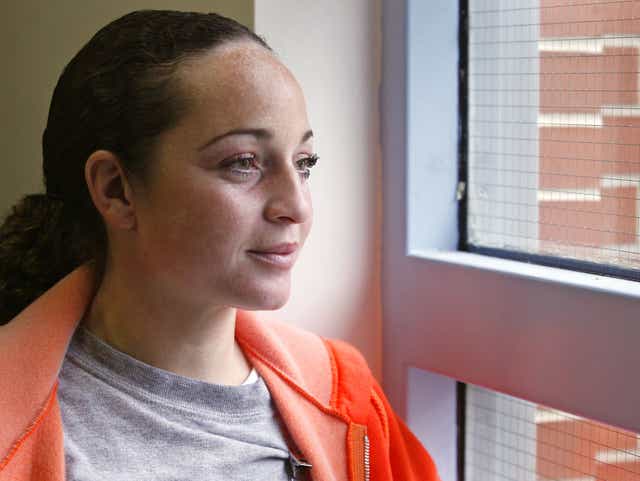 Kristina Fetters was a fourteen year old girl from Ohio who would murder her elderly aunt. According to court documents Kristina Fetters was sent to a behavioral treatment center in January 2004 and in October of that year she made plans to run away and steal her aunts truck. This teen killer also told fellow residents that she planned to murder the elderly woman.

Kristina Fetters and another resident, Jeanie Fox, would head over to the elderly woman’s home and waited for her visitors to leave. Once the aunt was alone Kristina Fetters and Jeanie Fox entered the home where Fetters would strike the woman over the head with a frying pan and attempted to slit her throat. Kristina would stab her aunt multiple times with a paring knife. Kristina would be arrested that night and would make a full confession. Fetters was sentenced to life in prison without parole.

In 2013 Kristina Fetters became severely ill and was diagnosed with stage four breast cancer. During a resentencing hearing the judge granted her immediate release from prison due to her illness. Kristina would spend her final eight months in a hospice center before passing away at the age of 34.

Two killers resided in the tiny frame of Kristina Fetters.

The first appeared Oct. 25, 1994, in a home in the unincorporated area of northern Polk County.

Driven by rage and the trauma of surviving rape, Fetters beat Arlene Louise Klehm, her 73-year-old great-aunt, with an iron skillet and stabbed her to death with kitchen knives. Fetters was sentence to life in prison without parole at age 15.

The second killer grew quietly inside Fetters. It was breast cancer. The disease took her life Sunday, her friend Jamie Ross told The Des Moines Register. She was 34.

“Kristina Joy is finally able to feel peace, free of emotional and physical pain. Our God granted her an absolute forgiveness pardon and took his baby girl home this morning. Her mother was with her and it was what we have all prayed for, peaceful. … God bless all of you, and please embrace your life, don’t waste it.

Kristina Fetters died in a Des Moines hospice, where she had resided since December 2013. The Iowa Parole Board granted her a compassionate release given the severity of her prognosis.

Hers was among the first Iowa sentences to be reconsidered after a 2012 U.S. Supreme Court decision struck down as unconstitutional sentencing juveniles to life without the possibility of parole.

Arlene and Wayne Klehm were distant relatives of Fetters, but they served as grandparents. Fetters called Wayne Klehm, who died in August 1984 before his wife’s murder, “Uncle Sheenie.” Arlene was “Pooper.” She swung from bed sheets tied to a tree in the front yard of the white-sided, one-story house on Northeast 28th Street.

Kristina Fetters was closer to Wayne than Arlene, who had to dole out discipline and say “no” when Wayne would say yes.

Fetters met her biological father when she was 8, but the two never became close. The psychological trauma weighed on her as a youth, she told the Register in 1996.

When she was 12, she met a 23-year-old man from Milwaukee. He wanted to be in the Black Gangster Disciples. She allegedly told the man she was 17. She ran away with him.

In June 1993, the man was arrested on kidnapping charges. He had held Kristina Fetters at gunpoint in his West Des Moines apartment, broke her nose and raped her.

After that, Fetters struggled. She skipped school. She ran away at least 13 times. Eventually, she was admitted to Orchard Place, an unlocked psychiatric home for troubled children on Des Moines’ south side.

She took medicine and sought solace in religion, but a Polk County Juvenile Court officer close to Kristina Fetters said she lived in a fantasy world most of the time.

In September 1994, a month after Wayne Klehm died, Arlene Klehm sent her grand-niece a handwritten letter trying to reconcile.

“Let’s be nice to each other and forgive me if I hurt you,” Arlene Klehm wrote.

Arlene Klehm and Kristina Fetters would not see each other again until Oct. 25, 1994. That was the night that little wisp of a girl, 14 years old at the time, 5 feet tall and just over 100 pounds, beat and stabbed her elderly great-aunt to death.

Kristina Fetters pleaded insanity at the trial, but a prosecution psychologist argued she carefully planned the killing. She was convicted and sent to prison without the possibility of parole.

Since Fetters’ conviction, brain research studies have shown that teenagers’ brains continue to develop into their early 20s. Psychologists believe young people’s maturity can be stunted by post-traumatic stress disorders resulting from abuse, neglect or other experiences.

The U.S. Supreme Court cited those studies when it ruled mandatory life in prison without parole for juveniles violated the constitutional protections against cruel and unusual punishments.

Kristina Fetters had stage four breast cancer. She was released to a hospice in December. Polk County Attorney John Sarcone, a Democrat, and Iowa Gov. Terry Branstad, a Republican, agreed the release was humane, but that each juvenile offender affected by the Supreme Court ruling should be assessed individually.

During the first few months at the hospice, Fetters was able to communicate. Ross said she had questions about the outside world, and her family and friends let her play with their cellphones, eat lots of different kinds of food and watch many movies.

“It’s scary for those of us coming out of prison,” said Ross, who met Fetters while they were inmates at the Mitchellville prison. “For us it’s hard, but you’ve got to put in all the fear that everyone normally experiences and triple that, because she’s going to hospice and everyone knows what hospice is for.”

Kristina Fetters spent time with friends and family during her last few months. During her last three months, Fetters responded less. The hospice helped control her pain, but during the last few days, people knew Fetters was close to death, Ross said.

She wanted people to understand she was remorseful for killing her great-aunt, Ross said. Her family had forgiven her, and it wasn’t until recently Kristina Fetters was able to forgive herself.

An Iowa woman who was recently released from prison has died. Kristina Fetters was 15 years old at the time she was convicted in the beating and stabbing death of her great aunt, 73-year-old Arlene Klehm, in Des Moines. She was just 14 at the time of the murder. Fetters was sentenced to life in prison without parole in 1995, but a Polk County judge altered the sentence and the Iowa Board of Parole granted her release to a hospice facility last year.

Kristina Fetters was diagnosed with Stage 4 inoperable breast cancer last September. Fetters’ aunt, Darcy Olson of Des Moines, was the only person to speak on Fetters’ behalf at the parole board hearing back in December. “No one can alter the past. It is what it is, this happened to our family and it’s now time for my family to have closure,” Olson said. “Kristina’s impending death cannot be denied and while there have been negative comments, we believe, as the victims, our family has suffered enough and we ask the parole board to grant our request.”

Following the parole board’s decision to grant Fetters’ release, Olson told reporters there was little cause for celebration. “It’s just so bitter sweet,” Olson said. “This has been a 19 year old tragedy for my family. This will bring closure for my whole family and help us all cope just a little bit better with the situation.”

Kristina Fetters died on Sunday in a Des Moines hospice facility. She was 34. Fetters’ case was the first in Iowa to be reconsidered after a 2012 U.S. Supreme Court decision banned sentences of life without parole for those convicted of crimes as juveniles

At just 15-years old, Kristina Fetters was the youngest Iowan ever to be sentenced to life in prison without parole. Tonight that sentence is complete.

In the end, the last person to forgive Kristina Fetters for what she did was Kristina herself. “When everybody else was telling her that they forgave her and they’re showing her unconditional love, she didn’t feel she deserved it. It was very hard for her to accept.” says Fetters friend and former cellmate.

In 1994, at just 14-years old, Fetters brutally killed her 73-year-old great aunt. Two years before that, Fetters was a victim of a horrible crime herself, and then a victim of the system. “She was kidnapped and raped. Her nose broken. Beaten. Held at gunpoint. And that’s hard to deal with,” Ross says, “She was on three different medications that are well known to not play well together now. She was showing every warning sign, every red flag that you possibly could on these drugs and they were all ignored.”

In prison, Fetters and Ross became more than friends. They were like sisters. Both, of them were kids serving life for an adult crime; killing someone else. Over the years they spoke with other troubled kids and tried to steer them in the right direction. “They came in and everybody would share their story. It would be Kristina, myself, and another inmate. We’d just open ourselves up and let it all pour out and let them see us for the same flawed humans that they are.”

Fetters was among the first in Iowa to have her sentence reconsidered after a Supreme Court decision in 2012. That decision made it unconstitutional to sentence juveniles to life in prison without parole. But before a decision could be reached, Fetters was diagnosed with cancer.

Fetters was granted a compassionate release from prison in December. Ross doesn’t want her remembered for her crime. She wants her friend remembered for the good she did after her crime. “Everybody’s like, well, she was a monster. She was evil. It would be so easy in this world if that were just the case. But that’s not the way that it is. Not everybody that commits a crime…not everybody that’s a sinner is evil or a monster,” Ross says, “Her legacy, I hope, will challenge other people to see what they can do for kids. For teenagers. Before it gets to the point where they’re in prison or needing to go before a judge for any reason.”