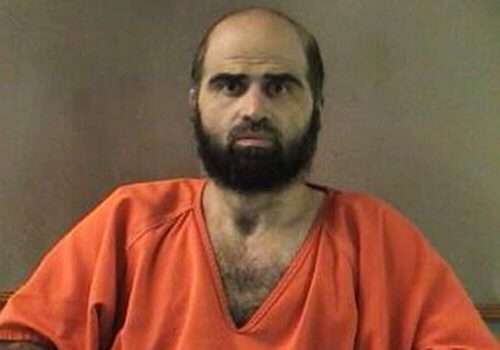 Nidal Malik Hasan was sentenced to death by the US Military for the murders of thirteen members of the US Military. According to court documents Nidal Malik Hasan was responsible for the Fort Hood Shooting which took place on November 5, 2009 which saw thirteen people shot dead and over thirty others injured. Nidal Hasan was severely injured in the attack was later tried and convicted in Military Court and sentenced to death. As of 2021 he remains on Military Death Row

Maj. Nidal Malik Hasan was sentenced to death Wednesday for killing 13 people and wounding 32 others in a 2009 shooting rampage at Fort Hood, Tex., the worst mass murder at a military installation in U.S. history.

Dressed in Army fatigues, Nidal Malik Hasan, who turns 43 next month, listened impassively as the death sentence was handed down by a panel of 13 senior military officers in a unanimous decision after less than two hours of deliberations. If even a single panel member had objected, Hasan would instead have been sentenced to life in prison. He also was stripped of pay and other financial benefits, which he continued to receive while in custody.

No active-duty service member has been executed since 1961, and legal experts said it will probably be many years, if ever, before the sentence will be carried out. Nidal Malik Hasan will be flown shortly to Fort Leavenworth, Kan., where he will join five other inmates on military death row, officials said.

In military cases, there are several mandatory appeal stages and a military death sentence requires final approval by the president, as commander in chief.

Despite the expected delays, survivors of the shooting welcomed the verdict. According to news reports, Kathy Platoni, an Army reservist, said: “From the bottom of my heart — he doesn’t deserve to live. I don’t know how long it takes for a death sentence to be carried out, but the world will be a better place without him.”

Nidal Malik Hasan, an Army psychiatrist, was found guilty this month on 13 counts of premeditated murder and 32 counts of attempted premeditated murder after opening fire Nov. 5, 2009, at Fort Hood’s Soldier Readiness Processing Center, where troops were getting medical checkups before deploying to Afghanistan.

Hasan, who was scheduled to deploy to Afghanistan a few weeks later, shouted “Allahu ­akbar!” meaning “God is great,” before targeting soldiers with a high-powered, high-capacity handgun he had fitted with laser sights. He was apprehended by military police officers after firing more than 200 shots.

Prosecutors aggressively pursued the death sentence during the 22-day court-martial this month, calling more than 100 witnesses, including 20 victims and relatives of the deceased to testify in a courtroom just a few miles from the site of the shooting.

During two days of evidence ahead of his sentencing, they described, in often emotional testimony, their grief and suffering.

Staff Sgt. Patrick Zeigler, who was shot four times and had more than 20 percent of his brain removed in surgery, told the court, “I was expected to either die or remain in a vegetative state.” He said that his personality has changed and that he is “a lot angrier, a lot darker than I used to be.”

The father of a pregnant 21-year-old private from Chicago, Francheska Velez, who was fatally shot as she pleaded for the life of her baby, testified in Spanish that Hasan had “killed me slowly.” Velez was one of three women killed in the shooting.

The court heard that Hasan had carefully planned his attack, training at a local firing range and researching jihad on his computer. The FBI and Defense Department have drawn criticism for failing to prevent the attack after missing a number of warning signs.

Hasan, an American-born Muslim, had exchanged e-mails with a leading al-Qaeda figure in which he asked whether those attacking fellow soldiers were martyrs. The e-mails were seen by the FBI. Hasan also once gave a presentation to Army doctors discussing Islam and suicide bombers and said Muslims should be allowed to leave the armed forces as conscientious objectors to avoid “adverse events.”

The psychiatrist, who acted as his own attorney, tried to plead guilty before the start of the trial but was unable to do so under military rules governing death penalty cases.

He called no witnesses, offered no testimony and declined to make any statements beyond a brief opening comment in which he took responsibility for the shooting and said he was a soldier who had decided to “switch sides” in what he believed was a U.S. war against Islam.

As a result, he faced accusations that he deliberately sought the death sentence.

But in a phone interview Wednesday, his former attorney denied that Hasan, who is paralyzed from the chest down and uses a wheelchair after being shot by military officers, had a death wish.

John P. Galligan, a civilian lawyer who regularly visits Hasan in jail, said his former client was denied the opportunity to defend himself when the judge barred him from arguing that he had carried out the mass shooting to save the lives of Taliban leaders in Afghanistan.

Galligan, who continues to provide legal assistance, denounced the proceedings as “almost a ludicrous show trial to secure a death penalty, even though they know it’s unlikely that it would be ever actually implemented.”

Galligan said the appeals would probably “go on for decades.”

“In all honesty, he stands a far more likely chance of dying from medical reasons than dying because he’s been sentenced to death,” he said