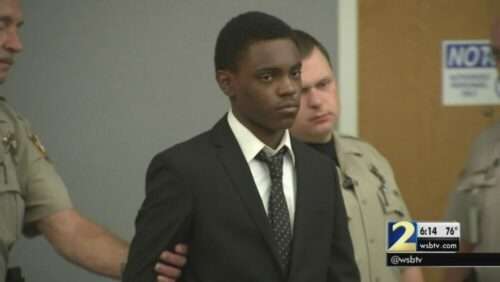 Reginald Lofton was fourteen years old when he took part in the murder of a pizza delivery man in Georgia. According to court documents Reginald Lofton and Jermaine Young lured the victim to an apartment block where he was shot and killed. Police do not know which of the two actually fired the fatal shot however under Georgia law it does not matter. This teen killer was sentenced to life in prison with no chance of parole for thirty years

“I wish I could give you more time than I can,” Rich told the teen. “Because I think you’re a coldblooded killer. I hope you never get out of jail.”

Lofton was convicted last month for his role in the March 1 shooting death of 28-year-old Shane Varnadore, a Papa John’s driver whom authorities believe Lofton and a friend lured to a Lawrenceville-area apartment complex to rob.

Varnadore was shot and killed. Authorities have said they don’t know whether Lofton or fellow suspect Jermaine Young — who has yet to be tried — actually pulled the trigger. Under Georgia’s party to a crime laws, however, it doesn’t matter, as long as it can be proved a suspect “aided or abetted” in the crime or crimes that led to another person’s death.

During Lofton’s trial, the prosecution suggested he, at a minimum, provided the cellphone used to make the calls to draw Varnadore to the Wesley Herrington Apartments, watched part of the incident and took the pizza that was being delivered back to his apartment after Varnadore was killed.

Lofton’s sentence Thursday — and specifically the inclusion of the possibility of parole — was not an unexpected one. Earlier this month, prosecutor Sabrina Nizam and defense attorney LeAnne Chancey both said they agreed it was the only possible outcome.

Lofton will be eligible for parole in 30 years. He’ll be about 45 years old.

Four friends and family members of Varandore spoke on his behalf prior to Lofton’s sentencing. They described him as a hard-working man who loved to play music and designed video games, and a peaceful type who wouldn’t kill a bug inside his own house.

Tara Varnadore, Shane’s sister, said her 4-year-old daughter recently asked her when she was going to die — “because she wants to see Uncle Shane.”

Nizam had to read a statement from Teresa Varnadore, Shane’s mother, because she was too emotional.

“I feel destined,” the statement said, “to live a life unfulfilled, since part of me is now missing.”

Lofton’s sister, Porsha Porter, also spoke before he was sentenced, arguing that he “deserved a second chance at life.”

“Instead of throwing him under the jail cell, help him, counsel him, something,” Porter pleaded.

Lofton grew up in Chicago and was put in his sister’s care last year after his mother died and his father was ruled unfit to care for him. The teen — who saw his share of violence and had many run-ins with the law in his hometown — at first denied his own opportunity to speak in court Thursday.

Then, just before he was sentenced, he opted to say a few words. He did not look at the Varnadore family as he spoke.