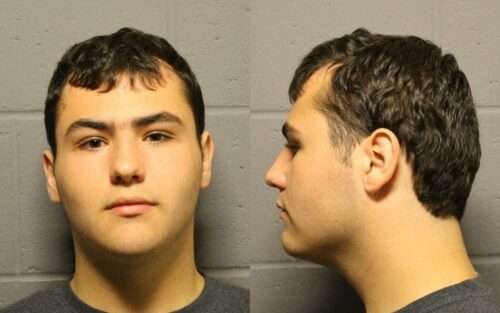 Jaered Long was sixteen years old when he fatally stabbed his grandmother to death in Kansas. There is some discrepancy on the spelling of his name as newspapers list him as Jaered and the Kansas Department Of Corrections lists him as Jared.

Anyway the facts remain the same as this teen killer would stab his grandmother with a bread knife several times while she laid in bed. According to Jaered he did not remember arguing with his grandmother or even being mad with her at the time of the brutal murder.

Jaered Long would plead no contest to second degree murder and would be sentenced to over forty eight years in prison.

Work or Program Participation Not Working

A Lawrence teen has been sentenced to more than 48 years in prison for murdering his grandmother, who relatives said took him in and showed him “unconditional love” — even as his mental health became increasingly troubling.

“This is, in fact, a tragedy for everybody,” Huff said, acknowledging high emotions in the courtroom, where relatives of the victim were also relatives of her killer.

Jaered Long was initially charged with first-degree murder in the case, but in April 2017 pleaded no contest and was convicted of second-degree murder as well as two felony counts of battery on law enforcement officers. Jaered Long also initially was charged as a juvenile in the murder case, but the judge later ordered him to be tried as an adult.

Deborah Bretthauer, 67, was found dead Dec. 28, 2015, in her apartment in the 1200 block of George Court. Jaered Long, who was 16 and living with Bretthauer at the time, was arrested shortly thereafter.

Bretthauer had been stabbed with a bread knife dozens of times in her own bed, Lawrence police previously testified. Jaered Long told police he didn’t remember arguing with his grandmother or being angry with her.

Bretthauer was a University of Kansas graduate and a nurse who also taught health courses throughout the region, according to her obituary.

At Long’s sentencing Tuesday, relatives read emotional statements touching on memories of Bretthauer as well as Long’s mental health struggles. They said they hoped Jaered Long would be able to get help during his incarceration.

“My heart still aches,” said Frank Bretthauer, who was divorced from Deborah Bretthauer but still close friends, even taking cross-country trips with her to visit one of their daughters in California. “Some may call this a plea deal, but there is no deal for any of us in this family. The tragedy continues the rest of our lives.”

Long’s aunts said in statements that their mother hoped to help Long by allowing him to live with her. However, they had become concerned for her safety and wanted to get Jaered Long out of her home and into more intensive mental health treatment, something in hindsight they wished they had pushed for more forcefully.

They said Jaered Long had been on medications nearly his entire life and had years of therapy — they did not name a specific mental illness — but nothing seemed to help.

“I wasn’t surprised,” daughter Molly Bretthauer said. “I had feared this day.”

Molly Bretthauer said Long’s “misguided” therapies, unstable living environments and feelings of not being loved enough resulted in him attacking a person who took him in and loved him unconditionally.

Molly Bretthauer said she recalled her mother telling Long, “Jaered Alexander Long, I love you, and I always will no matter what.”

Deborah Bretthauer’s daughter and Long’s mother, Melinda Toumi, mourned both the loss of her mother and her son’s long prison sentence.

“It is painful to me to have Jaered go to prison,” Toumi said. “My other children miss their older brother and their grandmother very much.”

Toumi sat on the side of the courtroom behind Jaered Long, while other relatives sat on the opposite side, behind prosecutors.

“We love you, Jaered,” his mother said as a deputy led Long out of the courtroom following his sentencing. “Call us when you can, OK?”

• Initially, in December 2015, he was charged as a juvenile with first-degree murder.

• Prosecutors filed a motion to try him as an adult in the case, and in October 2016 the judge agreed.

Huff said at the time that she considered a number of factors, including the seriousness of the offense, Long’s previous history and the rehabilitation resources that would be available to Jaered Long in either the adult or juvenile system, noting that juvenile resources were limited.

“There is no more serious offense than first-degree murder,” Huff said.

If convicted of first-degree murder as a juvenile, Jaered Long would have faced a maximum sentence of just 60 months in prison or to the age of 22.

• After his arrest in the homicide case, Jaered Long picked up additional criminal charges: two counts of felony-level battery on law enforcement officers while he was in custody at the Douglas County Juvenile Detention Center.

Jaered Long also was sentenced for those convictions on Tuesday, to 52 months in prison in one case and 32 months in the other, all to be served concurrently — or at the same time — with his murder sentence.

• In June, when Jaered Long was previously scheduled for sentencing, he got a new appointed attorney– Lowry — after his previous appointed attorneys, Branden Smith and Shaye Downing, withdrew citing potential for a conflict of interest. Further explanation was not made public.

• In December, Lowry told the court that Long wanted to withdraw his no contest plea. Huff heard Long’s request to withdraw the plea Tuesday morning but denied it, leading to his sentencing for the convictions he already pleaded to.

• Some relatives said they had hoped that under a plea agreement Jaered Long would face a shorter prison term, between 25 years and life in prison, which they said would be long enough for him to serve time for the crime and get help for his problems, but still leave hope that he could return to society. Huff said the record showed that was offered as part of a previous plea deal, but that Long rejected it.

Branson said the ultimately approved plea agreement was reached with “thoughts to the family’s anguish and the accountability of Mr. Long.”

Douglas County District Attorney Charles Branson announces Lawrence resident Jaered Long, 19, was sentenced on Tuesday to 586 months in prison for the murder of his grandmother, Deborah L. Bretthauer.  Long was originally charged with first degree murder as a juvenile in the stabbing death of Ms. Bretthauer.

After filing charges with the Court, the State sought to try Long as an adult.  The District Court Judge granted, after a hearing, the State’s request to prosecute him as an adult.  Long entered a plea to an amended charge of intentional second degree murder, before the scheduled trial, and he avoided the possibility of a life sentence if he were convicted of first degree murder.

Jaered Long, who lived with Ms. Bretthauer, called 911 on December 28, 2015 at approximately 11:47 p.m. and reported a stabbing at his residence.  Long advised dispatch he had argued with his grandmother at her residence and then he left to go for a walk.  He stated when he returned to the residence, he discovered his grandmother with a stab wound to her neck.

Jaered Long would later report during investigation by law enforcement that his grandmother asked him to clean his room sometime during the evening hours of December 28 and that the request made him angry.  Long stated he told his grandmother that he would clean his room tomorrow.  After playing video games in his room for a period of time, Long retrieved a knife from the kitchen and went to his grandmother’s room where he stabbed her repeatedly.  Jaered Long would later show detectives where he attempted to dispose of the murder weapon.

Jaered Long was also sentenced for another case stemming from two separate batteries on corrections officer while he was in custody.  Long received 52 months in prison on that case.  The sentence will run concurrently to his sentence in the murder case.

Today’s sentencing hearing was held in the courtroom of the Honorable Barbara K. Huff.  The case was investigated by the Lawrence Police Department and was prosecuted by District Attorney Charles Branson and Assistant District Attorney Bryant Barton.

A Lawrence man has pleaded no contest in the stabbing death of his grandmother.

Jaered Long entered the plea Thursday to second-degree murder and two counts of battery of a law enforcement officer.

Jaered Long was arrested in December 2015 after his 67-year-old grandmother, Deborah Bretthauer, was found dead in her Lawrence apartment.

He was 16 at the time but was to be tried as an adult for first-degree murder before he entered the plea.

The Lawrence Journal-World reports the two battery charges were filed after Jaered Long attacked two corrections officers while he was held at a juvenile facility.

A Lawrence detective testified at a hearing in September that Bretthauer was stabbed dozens of times with a bread knife.

Jaered Long will be sentenced June 5.