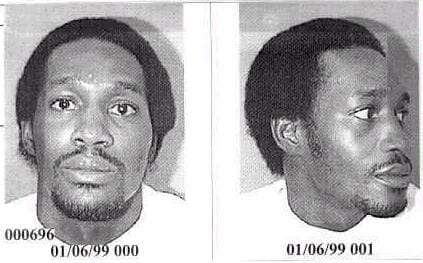 However Shaka Sankofa would deny that he was responsible for the murder and would maintain his innocence until he was executed by the State of Texas.

Gary Graham, 36, was executed by lethal injection on 22 June in Huntsville, Texas for the murder of a 53-year-old man outside a supermarket. On 13 May 1981, Bobby Lambert was coming out of a supermarket when an assailant reached into his pockets and shot him with a pistol as they scuffled. The robber got away with the change from a $100 bill.

Gary Graham, then 17, was arrested a week later (20 May) for the rape and robbery of a taxi driver. Lisa Blackburn said that Graham abducted her at a gas station, took her to a vacant place and repeatedly raped her.

Then, they went to her house, where he took her valuables, shot up the walls, got undressed, and fell asleep. Blackburn then took Graham’s gun and called police, who arrested him at the scene. Blackburn said that during the 5-hour ordeal, Gary Graham kept saying to her “I’ve killed three people, and I’m going to kill you.”

Police linked 22 crimes that occurred from 13 to 20 May to Graham. On 16 May, Gary Spiers was robbed and shot in the thigh with a sawed-off shotgun. From a hospital bed, he identified Graham as the shooter to police. Spiers said that Gary Graham saw he was having car trouble and offered to give him a lift, and attempted to rob him after he got in Graham’s car.

Gary Graham was also identified by Greg Jones as the man who shot him in the throat and left him for dead. In all, Gary Graham was suspected in 19 aggravated robberies — including the shootings of Spiers and Jones and the rape of Blackburn — two auto thefts, and Lambert’s murder. He pleaded guilty to ten of the robberies.

On the night of Bobby Lambert’s murder, Bernadine Skillern was sitting in her car in the parking lot. She said that when a man put a pistol to Lambert’s head, she blew her horn, and the gunman turned to look at her. There was a pop, Lambert dropped his bag of groceries, and the other man fled. She followed him in her car until her screaming children made her stop.

Skillern said that she got a good look at the killer for about a minute and a half. After Gary Graham was arrested, Skillern picked his mug shot and chose him from a police lineup. She identified him at trial and has continued to do so ever since.

Gary Graham has admitted responsibility for the other crimes, but says he did not kill Bobby Lambert and that Skillern’s identification of him is mistaken. Two other eyewitnesses, though they could not identify the killer because neither saw his face, nevertheless said it could not have been Graham, because he is 5’10”, while the assailant they saw was between 5’3″ and 5’6″. Graham also faults his attorney, who did not call the other two eyewitnesses to testify and did not cross-examine Skillern.

Most capital murder cases are decided without any eyewitnesses. A number of criminal defense attorneys have stated that they prefer when there is an eyewitness because it gives them a chance to create reasonable doubt. Harris County defense attorney Robert Morrow said, “I see there’s an eyewitness and I see an opportunity.” Another local defense lawyer, Floyd Freed, said, “it certainly gives me more hope at trial” if the prosecutors present an eyewitness.

At his trial, Gary Graham gave no alibi for his whereabouts on the night Bobby Lambert was killed. His lawyer said Graham told him only that he had spent the evening with a girlfriend whose name, description, and address he could not remember.

On appeal, four witnesses came forward to offer alibis for Graham, but when two of them — one was his wife — were called to testify before a state district judge, they contradicted themselves and each other and were deemed not credible.

Graham’s case attracted national attention from the media, anti-death-penalty groups, and even Hollywood. As the date drew nearer, each side offered new evidence to support their positions. Graham’s attorneys presented signed affidavits from three jurors who said they had a change of heart because they did not know about the other two eyewitnesses when they sentenced him to death.

Harris County prosecutors filed an affidavit signed by the bailiff who escorted Gary Graham from the courtroom after his death sentence, who heard him say, “Next time, I’m not going to leave any witnesses.” A prosecutor filed an affidavit stating that the bailiff related the comment to him within minutes of the time it was allegedly made. Harris County District Attorney Johnny Holmes noted that Graham’s case was reviewed 35 times by the courts and that his conviction was never overturned. The Supreme Court rejected Graham’s appeal in May.

Gary Graham, who called himself Shaka Sankova since 1995, was in the top 25 in Texas death row seniority and had seven prior execution dates. In January 1999, he called for violence and asked his supporters to go to Huntsville armed with AK-47 rifles to stop his execution.

New Black Muslim Movement leader Quanell X urged young blacks to take out their anger against whites in wealthy neighborhoods if this execution was carried out. And recently, Gary Graham reiterated his intention to “stop this thing by any means necessary.”

Many Huntsville businesses closed early Thursday because of safety concerns. The Walker County courthouse closed at noon and city officials advised business owners to clear the area. Prison workers who live in about 30 houses near the Walls Unit, where all Texas executions are performed, were told to leave and staffers in the administrative offices were given the day off.

Police set up barricades Wednesday night and set up two protest areas on opposite sides of the Walls Unit, one side for Graham’s supporters and the other side for the Ku Klux Klan. At noon on Thursday, the Texas Board of Pardons and Paroles denied Graham a 120-day reprieve by a 14-3 vote.

The board also voted against commuting his punishment (12-5) and against a pardon (17-0). Later in the afternoon, the Texas Court of Criminal Appeals and the U.S. Supreme Court, both of which had turned down Graham’s appeals in the past, did so again.

The Supreme Court’s vote fell 5 to 4. Graham’s lawyers’ final move was to file a civil suit against the Texas parole board. A federal judge rejected that suit and Graham’s attorneys did not appeal that ruling. The execution, scheduled for 6:00 p.m., was delayed for over two hours because of the last-minute appeals and lawsuit.

Though under Texas law the governor has the power to grant one 30-day stay of execution per prisoner, that option was not available to Governor George W. Bush because his predecessor, Ann Richards, used it on Gary Graham in 1993.

Even if that option was available to him, however, it is a given that Bush, who said he supported the execution, would not have used it. Outside the Walls Unit, a small fight broke out when some of Graham’s supporters snuck into the Klan demonstration area, but a riot team from the Texas Department of Public Safety quickly moved in to stop it. After the Supreme Court’s decision was announced, Graham supporters broke through police lines and six were arrested.

Gary Graham resisted and fought the guards who took him from death row in Livingston to the Walls Unit in Huntsville Wednesday evening. He refused meals that night and on Thursday.

Extra restraints were used to strap him to the gurney, where he made a long, defiant final statement in which he said he was being lynched and that the death penalty was a “holocaust for black people in America.” Gary Graham, a.k.a. Shaka Sankova, was pronounced dead at 8:59 p.m.

During the period May 14 through May 20 of 1981, Gary Graham robbed some 13 different victims at nine different locations, in each instance leveling either a pistol or a sawed-off shotgun on the victim. Two of the victims were pistol-whipped, one being shot in the neck; a 64-year old male victim was struck with the vehicle Gary Graham was stealing from him; and a 57-year old female victim was kidnapped and raped.

A total of 19 eyewitnesses positively identified Graham as the perpetrator. Gary Graham pled guilty to and was sentenced to 20-year concurrent prison sentences for 10 different aggravated robberies committed May 14, 15, 16, 18, 19, and 20, 1981. During the armed robbery of one victim, Richard B. Sanford, Gary Graham boasted of having killed six other people already.

On May 13, 1981, at 9:35pm, Bobby Grant Lambert was robbed and murdered in a Safeway parking lot in north Houston, Texas. Four out of the original five witnesses described the murderer as a young, thin black male, from medium height to tall. On May 27th, 17-year-old Gary Graham, a 5’9″, 145 lb. black male, was positively identified as Mr. Lambert’s murderer by Bernadine Skillern, the one eyewitness who clearly saw the killer’s face.

Five months later, Gary Graham was convicted of the murder and sentenced to death. By the time he was executed 19 years later, Gary Graham had secured the support and following of anti-death penalty activists who insisted that he was innocent and the death penalty was racist, including Danny Glover, Jesse Jackson, and Al Sharpton. Gary Graham resisted and fought the guards who took him from death row and made a long, defiant final statement just before his execution.